The city of Vicenza in Italy’s Veneto region is also known as the “City of Palladio”, the architect who made it famous. To give you an idea of just how special it is, the entire historic center is officially a UNESCO World Heritage Site. 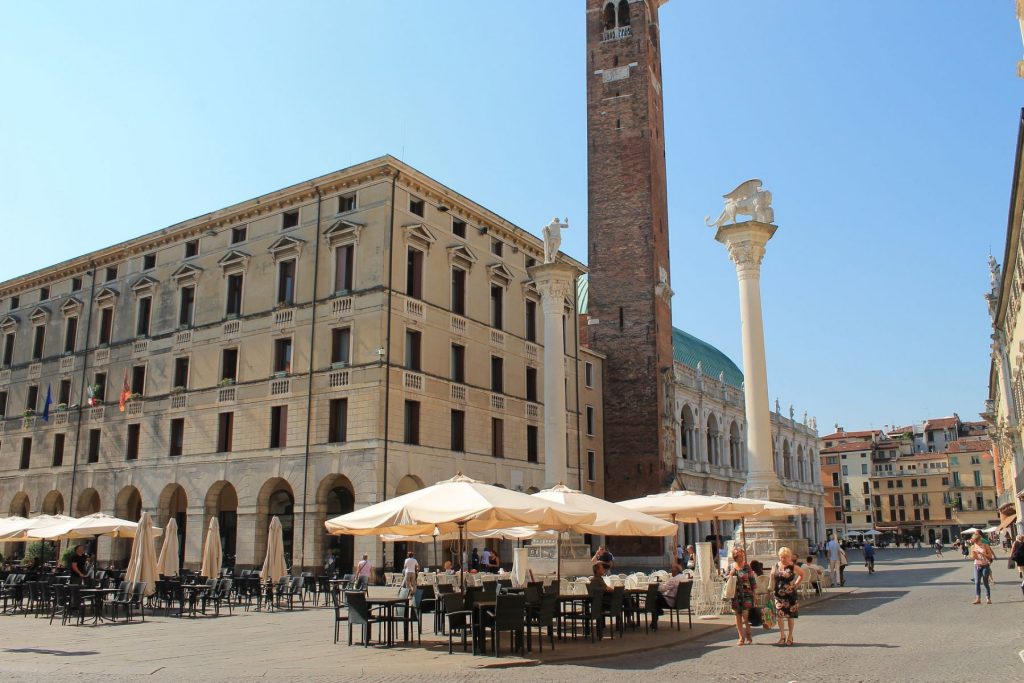 Any proper tour of Vicenza begins in its magnificent Piazza dei Signori. Here you’ll find the many of the sights that are absolute must-sees while you’re here.

Two columns oversee the piazza along with the clock tower- the Leone Alato and the Cristo Redentore. The Winged Lion was built in 1464 and is the symbol of the Republic of Venice. Christ the Redeemer was built almost 200 years later.

Andrea Palladio was the architect responsible for the majority of the monuments that have made Vicenza famous today. Palladio was born in Padova in 1508 and is considered one of the greatest architects in the history of Western architecture.

We could say that his masterpiece, although there are many, is the Basilica Palladiana found in Vicenza’s piazza. Palladio was hired for the reconstruction project on the existing Palazzo della Ragione. He transformed it from its original Gothic state by adding a loggia, an outer shell, and a portico. It’s not a “Basilica” as we think of it today in that it is not a church, but rather modeled after ancient Roman buildings. Today it is part of the Civic Museums of Vicenza and holds various museums. For more details on opening hours, click here. 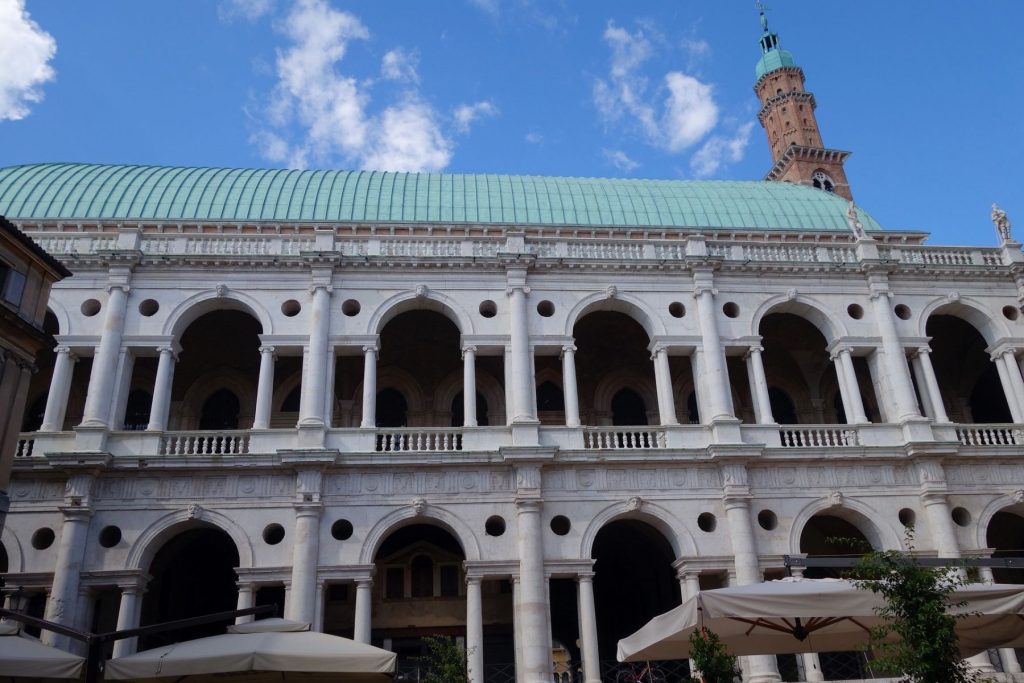 The clock tower, or the Torre Bissara, is 82-meters high and predates the transformation of the Basilica by several hundred years.

Also in this piazza is the 15th-century Palazzo del Monte del Pietà with the Church of San Vincenzo.

Finally, another Palladian monument found in Piazza dei Signori is the Palazzo dei Capitaniato. Built in 1571 it now houses the city council. It stands out because the columns were done in red brick rather than marble.

Palladio’s final design for Vicenza was the Olympic Theater or the Teatro Olimpico. It is one of three stage theaters from the Renaissance that are still standing with the others being the Sabbioneta in Mantua and the Teatro Farnese in Parma. Olimpico also boasts the oldest stage set in the world! It has been there since 1585. Sadly, Palladio died before he ever got to see his theater completed. 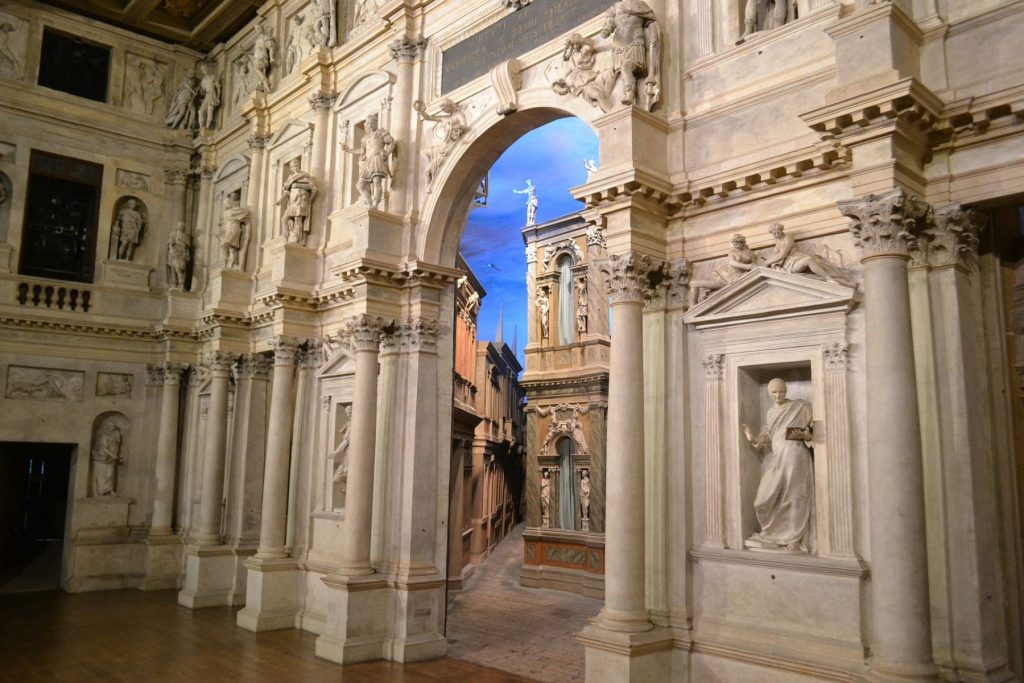 If you haven’t already figured it out, Vicenza is truly the city of Palladio. The city’s main street is also named Corso Andrea Palladio and departs from the Basilica. Shops, restaurants, cafes, museums, and many other buildings designed by Palladio line the avenue.

Palazzo Chiericati, also designed by Palladio, is now home to the city’s Civic Art Gallery. An impressive collection of masterpieces ranging from the 13th through the 20th centuries are on display here with particular attention to the Venetian school of painting.

If you are an architecture fanatic, or simply intrigued by Andrea Palladio, then don’t miss the Palladio Museum located inside Palazzo Barbaran da Porto. His revolutionary book Four Books on Architecture as well as detailed models of his most famous designs can be seen here.

As far as churches are concerned, a must-see is the Church of the Santa Corona, or the Holy Crown, which as legend has it, holds one of the thorns from Jesus’ crown at the time of his crucifixion. Within the church, you’ll also find incredible artwork including frescos by Michelino da Besozzo in the Thiene Chapel.

Vicenza’s Santa Maria Annunziata Cathedral is a 15th-century building whose only surviving element after WWII bombings is its magnificent facade. 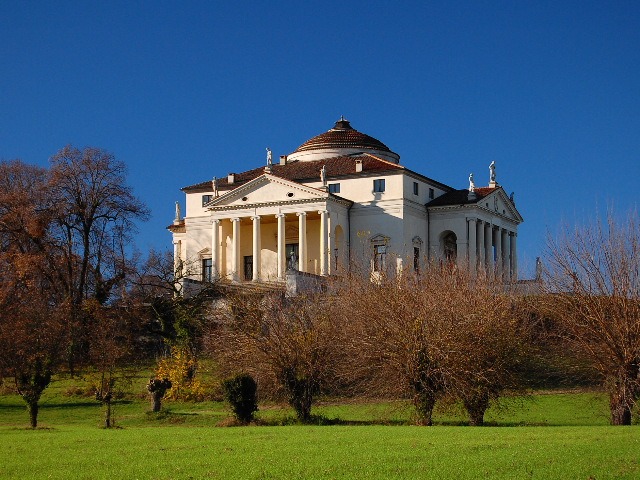 Lastly, on our tour of Vicenza, you won’t want to miss the Villa La Rotonda, also designed by Palladio. Also referred to as Villa Almerico Capra, this 500-year old building is located slightly outside the historic center but still only a 30-minute walk. Inspired by the Pantheon in Rome, it is truly an architectural masterpiece surrounded by beautifully landscaped grounds.

This is just a basic guide to the top sights in this magnificent city. There is much more to see if you have time, but the great thing about Vicenza is that it is very walkable and concentrated which makes it extremely tourist-friendly.