The room wasn’t too small or too large. It had the size of an English living room, with two normal spaces expect for one thing, they were divided by an iron grate.
A dreadful room, maybe due to the scarce illumination, where a red light was watching every corner, a hungry eye with the only desire to feed itself. It didn’t matter where you were or what you tried to do, nothing could escape from its stare, crimson as blood. 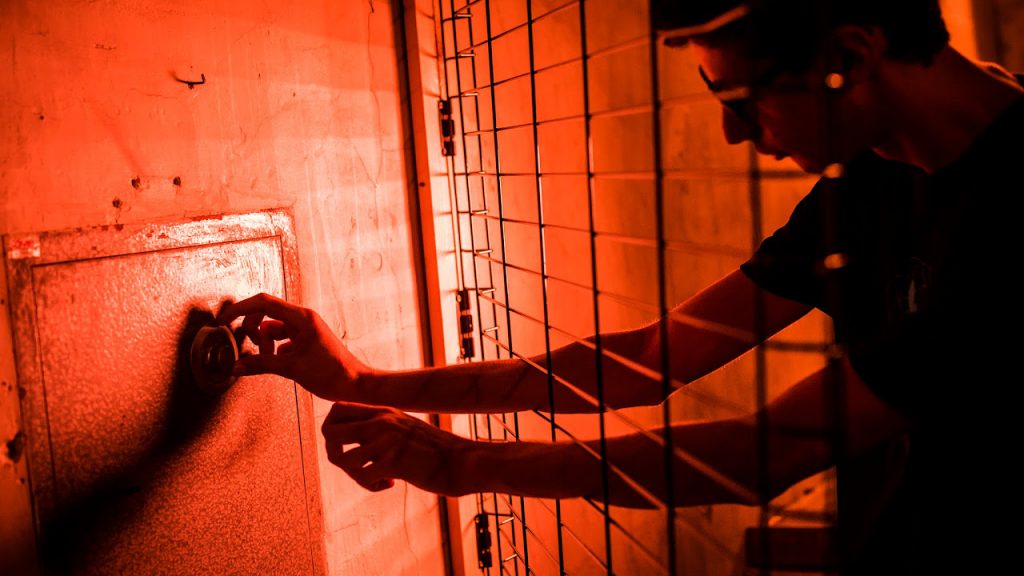 The smell of the plaster and the dust cut off the breath, the heavy air filled the lunges, the steps became more and more slower and all the chamber looked like wrap around you. Smaller and smaller, a four walls cage.
How many? How many where here before you?
How many were buried within the stony wall? How many were exhaled their last breath here?
The table, leaned against the wall, remember to you an old kitchen crowded by family’s fights, grudges never resolved; a place where no one is anymore welcomed. The holed legs were hiding now greenish mildews, their spores poisoned the air and the willpower of the person.
On the wreck pavement where the only signs of life: marks of nails were the path to the darkness of the room.
Somewhere, someone pushed the button, the countdown started and so their last sixty minutes, the last hour of their life.
Invisible eyes were lurking in the shadows, mute and cruel witnesses which didn’t care about the terrified voices, empty screams in the void. They were asking for help but no one would come, they were begging for freedom and mercy until their voices became hoarse murmurings.

This is Intrappola.to Ravenna, an escape room in Via Mafalda di Savoia, 19, in the city centre of Ravenna.
Escape rooms, places where groups of friends have one hour to escape, have arrived in Italy and in Ravenna thanks to the Intrappola.to franchising (the HQ is in Turin).
If you want to run away you have to be smart, fast and able to solve all the enigmas that you will face in the Room.
Intrappola.to Ravenna offers two Rooms to play. Classic, the first one, opened one year ago, it’s a dreadful cellar; someone closes you inside the room and now you need to escape.
Prison is the second one, you and your team got a death sentence and in one hour you have to break out and avoid the electric chair.
Minutes of tension and adrenalin will bring you to cooperate with the team; remember together you will live or die.

And so? Are you ready to escape?
And the merciless time was flowing.