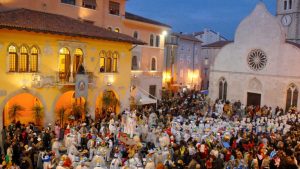 At the most extreme point of northeastern Italy, embraced by the northern waves of a very clear Adriatic Sea, lies a town of unspeakable beauty: Muggia. The Carnival celebration has been  deeply-rooted, highly emotional and felt by its population (me included) for centuries. An artistic expression of the Muggesani people, Carnival is practically a focus all year round. Its culmination is without a doubt in the winter, but it is also an event in the summer with the crazy masked days of the “Summer Carnival”. It’s a time of immense joy and limitless entertainment.  The heart of Muggia and its people beats mainly for this as if it were practically their mission. 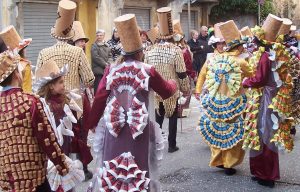 The Carneval de Muja (Carnival of Muggia) was first recorded in 1420, on municipal documents and then reappears historically in the years to come with the description of the “Dance of Vegetables”, which today symbolizes the beginning of Carnival.

But it is in 1954, that the Carneval de Muja meets its fortune and, from the shipyards of Muggia and (thanks to many skilled workers), becomes the admirable masterpiece that it is still today. Since then, groups of people, aggregated in carnival companies with extravagant names, have dedicated their inexhaustible imaginations for months in preparation for the Sunday parade. The Sunday parade of allegorical floats through the city is the funniest and most engaging competition ever seen: a competition for prizes for costumed groups and carts organized by the Association of Carnival Companies of Muggia. 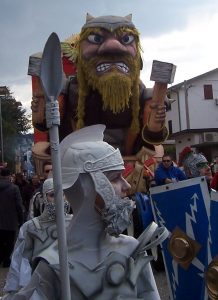 In the highly anticipated 66th GRAND MASKED PARADE, there will be 8 “companies” competing: Lampo, Brivido, Bulli & Pupe, Trottola, Bellezze Naturali, La Bora, Ongia and Mandrioi. Each company will be armed with talent, satire, a cheerful spirit and each one fiercer than ever when it comes to winning the coveted victory of this wild parade. Each will exhibit a different theme that will be coordinated to music by its own band. With choreography and ballet, spectacular costumes (designed and sewn by hand by the local ladies), various concerts, street theater along the entire path of the parade, the Grand Masked Parade will be a spectacular show!

Muggia’s Carnival is unique in that there is a total absence of facial masks. Everything is genuinely frank and characters are recognizable which allows for improvisation and interaction with the spectators. This is probably the key to the impressive success of this incomparable event which, embellished by the majesty of its carnival floats, wins the hearts of a very large and enthusiastic public coming from Italy, from Europe and from the whole world. 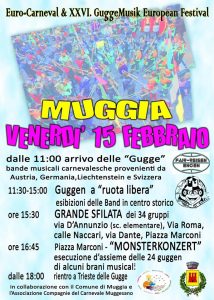 The Carnival Muggesano has no tinsel and has no secrets, but it never ceases to surprise and amaze every single year! There’s truly nothing like it anywhere else in the world!

For information and detailed program, visit:

… and for those arriving from Trieste, bus line number 20 will be departing from the Central Station and heading for Muggia!