A Castle to Discover in Pavia: the Visconti Castle

When you think about the castles of Lombardy, the Sforza Castle in Milan with its majesty and its beautiful park immediately comes to mind. In this article, however, I’ll tell you about another castle, not widely know, but equally important and beautiful: the Visconti Castle of Pavia. 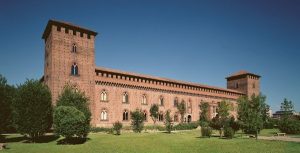 The castle dates back to the Middle Ages and it is called Visconteo because it takes the name from a member of one of the most important families in Milan, the Visconti. I am talking about Galeazzo II Visconti, Lord of Milan, who conquered Pavia in 1359. He enjoyed the city so much that he decided to build his palace there. Galeazzo II did not waste any time. In fact, construction began in the following year and it only took five years to complete. It became a refined court residence.

The castle is square-shaped, composed of four quadrangular towers and it is surrounded by a moat. Nowadays, the moat is empty like the Sforza Castle in Milan but, in the past, it was filled with water from the Naviglio. Galeazzo II had the canal built to have a direct connection with Milan. The castle is on two floors and it has a courtyard surrounded by arcades. 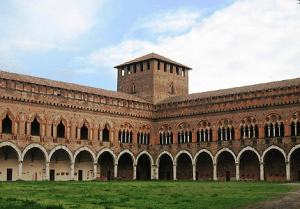 One of the curiosities about the castle is that it was initially surrounded by a huge park which today can no longer be admired. However, people from Pavia are lucky, because a part of the park is still visible. It is located in the suburbs of Pavia and it is now known as Parco della Vernavola. The park used to connect Galeazzo II Visconti’s residence to his family’s mausoleum, which nowadays is the Certosa of Pavia.

The second curiosity is that an important personality is related to the castle: the poet Francesco Petrarca. His patron was Galeazzo II, who invited him to Pavia to contribute to the creation of the library of the castle, precisely during the years when the castle took shape.

The castle remained intact for two centuries, until 1525, the year of the Battle of Pavia fought between the Spanish and French armies. They both wanted to conquer the city and, during the battle, the northern area of ​​the castle and two of the towers were demolished. 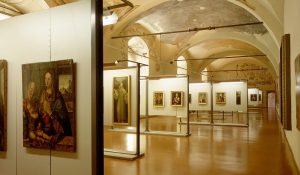 • The Blue Room: named after the color of the frescoes.

• Room of the wooden model of the Cathedral of Pavia, where you can admire one of the most magnificent models still intact.

• Rooms with paintings dating back to the 16th and 17th centuries, where you can find paintings of artists from Pavia and other well-known painters, including Francesco Hayez, Tranquillo Cremona and Giovanni Segantini.

• Room of the Italian Pavilion of the Risorgimento, with important spaces dedicated to Garibaldi and another family from Pavia, the Cairolis. This family was greatly praised by Garibaldi.

The area where you can see temporary exhibitions is called the Scuderie project of the Visconti Castle.

The castle is not just art and history. Throughout the year there are many events such as concerts and shows that take place in the gardens as well as the biggest wine and food event in the province of Pavia, Autunno Pavese.