A Sicilian Romance: The Island of Ortigia 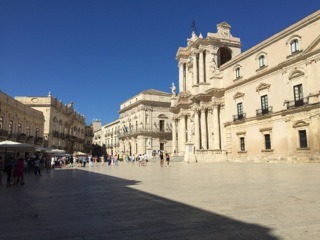 Spending a weekend in Sicily is not only possible, but it’s also a necessity! And it is even more beautiful than what you would expect. At least for me, a native Umbrian, Sicily has been a recent discovery and now that I’ve been, I’m totally enthralled. I decided to go back for a romantic getaway on a sunny weekend in September. I chose the Island of Ortigia, the old city of Syracuse.

Syracuse is a very ancient city, home of artists and philosophers, and Ortigia is a concentration of beauty that exudes history from every brick.

From the two bridges that connect it to Syracuse, you can immediately reach the Temple of Apollo, the most important monument on the island and one of the oldest in Sicily. The ruins of the temple, surrounded by a very nice garden, are the entrance to the old city and are only the beginning of the journey in time that Ortigia offers its visitors.

In the square in front of the Temple, concerts and meetings are often organized and we were lucky enough to be able to listen to live music the night of our arrival. You can also find the best cafe in town, known for its exquisite cannoli and typical Sicilian breakfast of a sweet roll with a granita. This is the Sicilian remedy for renewing both the body and mind on torrid summer days. 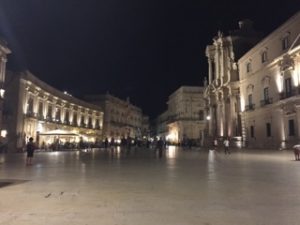 Continuing downtown towards the center of the island, you will have two choices: walking down the main street, full of boutiques, and up to the fountain of Diana, or taking the chaotic Via Cavour which leads to the famous Piazza del Duomo. Personally, I recommend the latter, because it is full of little characteristic shops. There are plenty of restaurants and cafes where you can take in Ortigia’s true atmosphere. Indeed, nothing is more beautiful than getting lost in the alleys and lanes and letting yourself be carried away by the scents of the Sicilian delicacies, coming from every direction.

Ortigia’s Piazza del Duomo is surrounded on all sides by a tangled web of alleyways. You’ll likely find yourself strolling along one of them serenaded by one of the many street artists playing a melody. The Cathedral is one of the most beautiful architectural examples in all of Italy. The façade is Baroque, like all the churches in south-eastern Sicily, but the remains of the ancient Greek temple on which it was built are still visible. Places like this make you realize that true beauty is immortal. 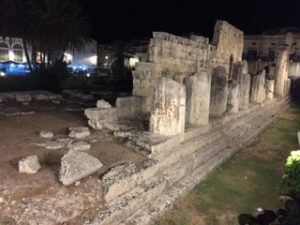 From here, you cross what I have renamed “the artists’ street” for its numerous stalls selling local handicraft items. You’ll arrive at the Fountain of Artesia, a small, semi-circular lake formed by a spring of fresh water. This peculiar fountain is close to the sea and has a group of papyrus springing up from its water (said to be the only spontaneously planted in all of Europe). Whether it’s because of the papyrus or the legend of Arethusa and Alpheus, you’ll be in awe of this fountain.

From here, you can continue on the promenade towards the extreme tip of the island and visit the Maniace Castle, dating back to medieval times. You can also go back and walk along the brand new port, perhaps under the shade of the tree-lined avenue that runs alongside it. If that is the case, you’ll have the added benefit of passing through a small park shaded by giant ficus trees. My advice is to sit here and listen to the birdsongs of the many species that populate the foliage of these majestic trees on clear sunny days, taking a break from the world. 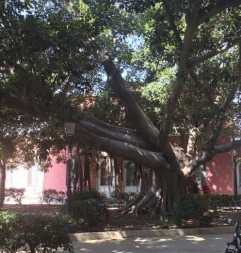 As you can see, much of Ortigia’s beauty is found in the open air, simply by wandering around the city in search of unique views and landscapes. The sea is just another example of its breathtaking atmosphere. Even though the coast here seems rocky and inaccessible, Ortigian ingenuity installed floating platforms for easy entry into the water.

I’ve barely touched upon the food here; it is almost impossible to eat poorly in Ortigia. There are countless places where you can sample real Sicilian cuisine and appreciate its excellent quality.

When our little getaway came to an end, we left the island with our bellies and hearts full, fully aware that it wasn’t our last goodbye.

Read more on Ortigia by other authors who have visited!

Article and photos by: G. Sdei