The Abbey of Grottaferrata Just Outside of Rome

In the heart of an area known as Castelli Romani, just south of Rome, you’ll find the town of Grottaferrata. It’s renowned for its wine, fantastic countryside, and its abbey.

Its origins are ancient: in the distant year 1004 Nilo, a monk from Calabria, decided to build his monastery on the land the Pope had given him. The settlement began before 1054, which was the year of the schism that divided the church into the Eastern Orthodox and Roman Catholic churches.

Nilo, who was a Byzantine monk, brought Byzantine liturgy and spirituality as well as art from this culture into the region of Lazio. The peculiarity lies in the fact that the abbey of Grottaferrata is a Byzantine church founded, not only in a western territory, (Latin Church) but right at the gates of Rome. 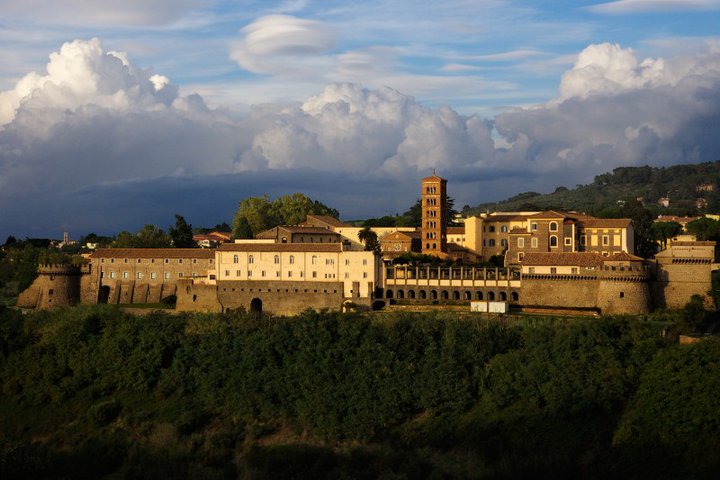 Numerous traces of its millennial history have been preserved in the abbey. Its original nucleus rises around a grotto with a window closed by an iron grate or a crypta ferrata. Hence the name Grottaferrata meaning “cave with an iron grate” in Italian.

The Church, dedicated to Saint Mary, preserves works of high prestige with the oldest ones dating back to the 12th century. It houses important works of art: the mosaic that overlooks the entrance portal, the marble baptismal font and the mosaic that lies inside the church above the altar, as well as the splendid icon of the Virgin called in Greek Theotokos, which means “The Mother of God”. Also noteworthy is the powerful altar, called macchina barberiniana, built in the seventeenth century. Walking along the right nave, you can admire the ancient crypta ferrata.

The famous painter Domenico Zampieri, better known as “Domenichino”, came here and frescoed the chapel with the stories of the Saint in the beginning of the 17th century.

From the external square, visitors can appreciate the peace of the monastic life, as well as the baptismal font, used to commemorate the most important Orthodox Church feast, the baptism of Christ.

The monastery offers archeological sites as well. From the square, you can descend underground into the cryptoporticus. Used throughout the centuries for various purposes, this area offers tourists a breathtaking panoramic view.

Outside, the whole structure has the typical aspect of a fortress thanks to its powerful defense towers ordered by Cardinal Giuliano della Rovere, who later became Pope under the name of Julius II. Pope Julius II is famous for commissioning great works of art in the City of Rome, such as the Sistine Chapel’s vault frescoes.

The abbey is a myriad of Byzantine art (practically the only one of this level in Lazio), where you can admire works of great painters and sculptors, as well as ancient Roman structures. All of this beauty within the intimate Greek monastery.

Within the complex, the Abbey Museum has recently reopened to the public. The museum preserves the church’s decorative apparatus and houses archeological pieces of great value (such as the funeral stele and the garland tomb).

You can visit the Abbey of Grottaferrata Monday through Saturday by appointment only.