Among the Gods: Sicily’s Valley of the Temples

If you read our article on the Scala dei Turchi then this one pairs perfectly with it as both sites are in the Agrigento province of Sicily. The Valley of the Temples, sometimes known as the “Valley of the Gods”, or its Greek name Akragas, is one of the best-preserved examples of Greater Greece architecture still existing today. Not surprisingly, the seven temples are a UNESCO World Heritage Site.

The City of Akragas

Colonists from Gela and Rhodes founded the city of Akragas in 580 BC. Within a fairly short amount of time, the city was booming and was enclosed by a 12 km wall. The population swelled to an astonishing 200,000 residents. It thrived until the Carthaginian conquest in 406 BC.

In 210 BC, during the Punic Wars, it fell to the Romans who renamed it Agrigentum. It survived the invasions of the Arabs, Berbers, Spanish, Egyptians, Syrians, and Persians between 829 and 840 AD.

Amazingly, the temples were unknown to other Europeans until the mid-1800s. The seven temples are all Doric and were renamed during the Renaissance period because evidence that would confirm to which god the temple belonged has been lost over time. 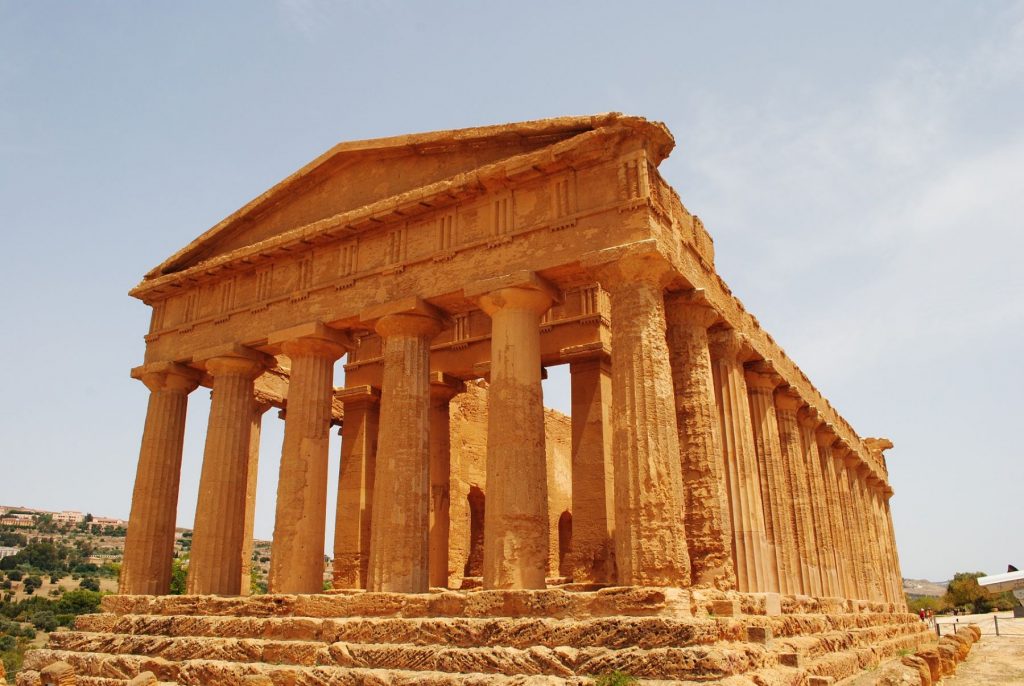 The most stunning example is the Concordia Temple which dates to the 5th century BC. Its condition makes it one of the foremost specimens of Greek architecture today. Its base is 40 x 16 meters and it has a facade of 6 columns. The roof would have been covered with marble tiles. During the 6th century AD, it was converted into a church and the entrance was moved. The sepultures date to the Middle Ages.

The Temple of Castor and Pollux (Dioscuri)

Although not in the same condition as Concordia, this temple dedicated to the twin brothers born out of the union of Jupiter and the Queen of Sparta is the symbol of Agrigento. It was partially rebuilt in the 19th century and only four columns exist today. 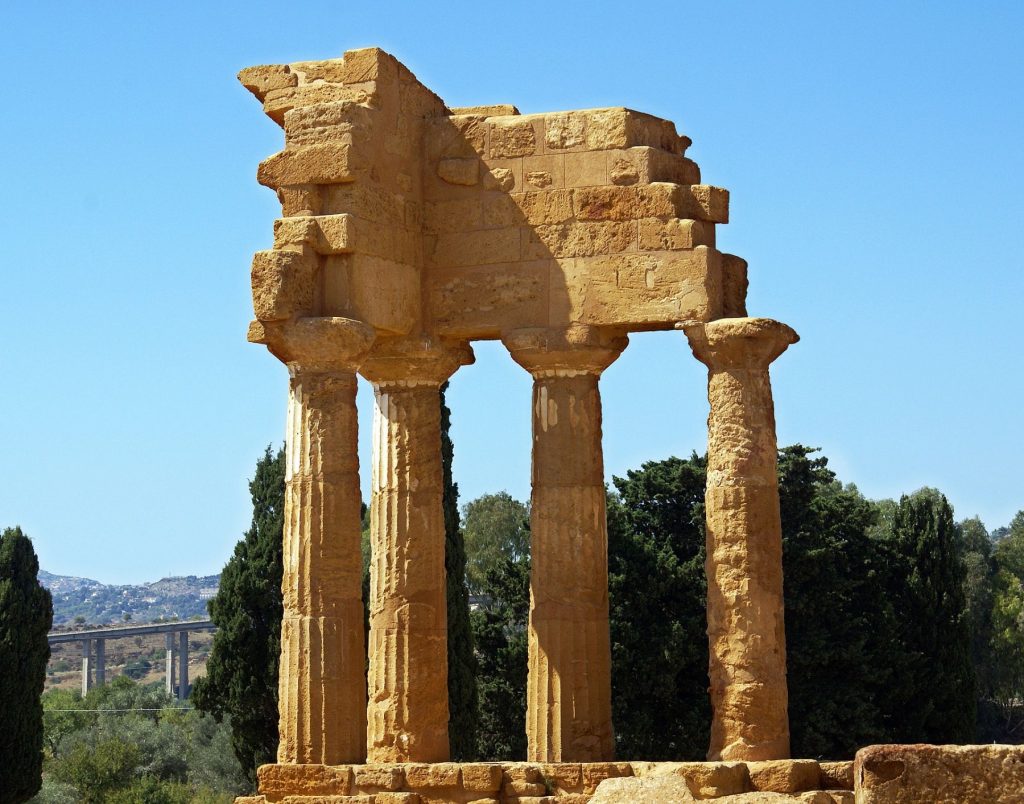 Probably dating to about 430 BC, little is left of the original building. In the 1920s there were actually colonial-style homes built alongside it!

This structure probably dates to somewhere around 450 BC and there is evidence that it may have been burned during the Carthaginian conquest in 406 BC. It’s located at the highest point in the park.

A funeral tower that dates to the late Hellenistic period and was actually part of the Roman necropolis Giambertoni.

This is the oldest of all the temples and during the Roman era, it was probably used as a temple devoted to the Cult of Asclepius.

Used as a quarry during the Middle Ages, sadly, not much of this temple remains. It was probably one of the largest temples in all of antiquity and was actually never completed. Documents state that it still didn’t have a roof when the Carthaginians sacked the city in 406 BC. Even though it wasn’t complete, it must have been quite a sight to behold as it was surrounded by 8-meter tall atlases or giant statues.

The Pietro Griffo Museum of Archaeology located on the site holds almost 6,000 artifacts from the immediate area and other parts of Sicily as well. It is an absolute must for any visitor wanting to get a better understanding of the rich history of Akragas and its many subsequent manifestations.

This is a very large archaeological park (1,300 hectares). Come prepared to walk; however, disabled and less-mobile guests rest assured as the park has routes designed to accommodate most guests.

Guided tours and an app are available. Before your visit, make sure to visit the official website which has all the details you’ll need for a perfect visit! 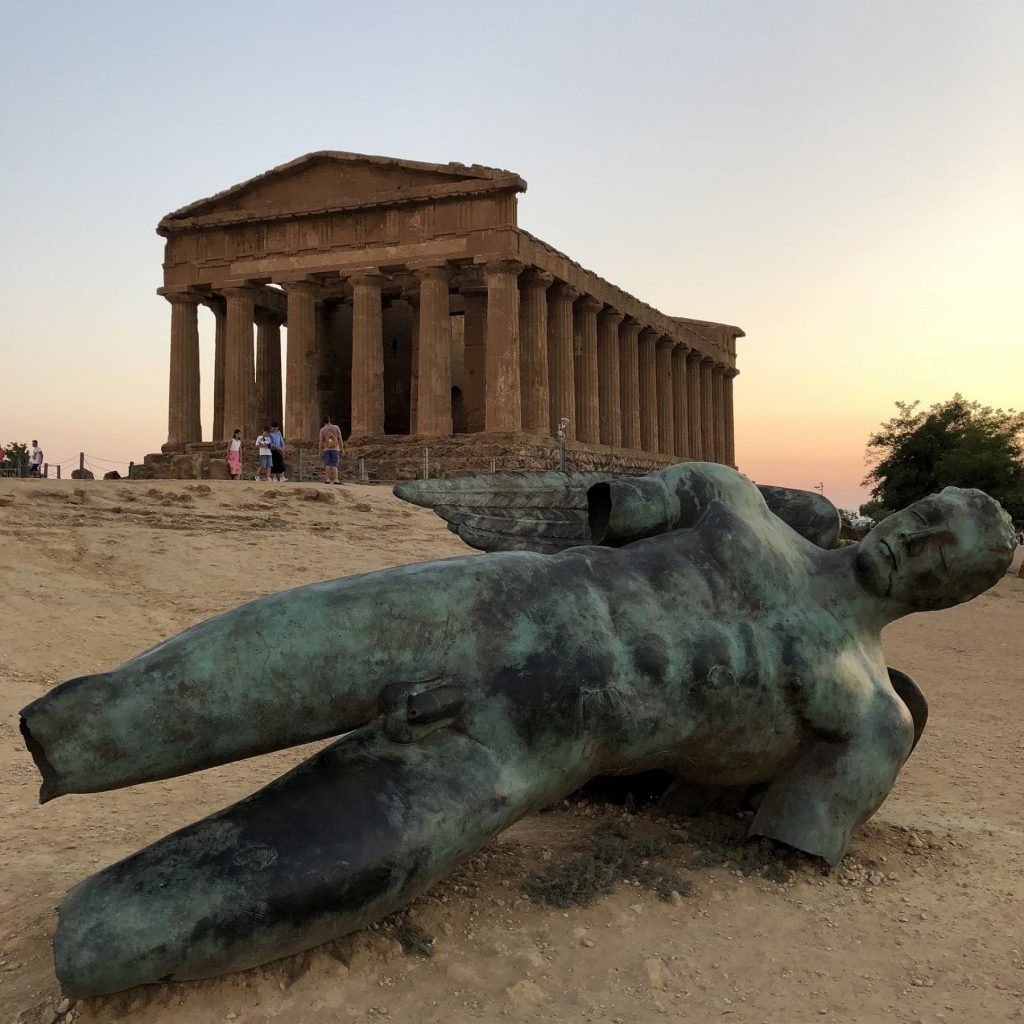