Our journey begins in Segesta. According to ancient documents and the historian Thucydides, the city dates back to the ninth century BC, when Trojans fled after the destruction of Troy. The people took the name of the Elymians. The city reached its splendor around the fifth century BC, despite the long diatribe with Selinunte for the domination of the area and for the dominance in the trade. From the 4th century BC began the decadence that culminated with the destruction by the vandals in the fifth century A.D. It no longer reached the prestige of the past and in the medieval period it was reduced to a small village built by the Normans around a castle. 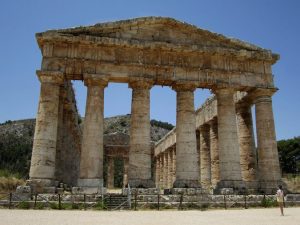 The temple and the theater are of great importance today. The temple was built in the 5th century BC on a hill outside the city walls. It has six by fourteen columns. The entire colonnade of the peristasis is still visible today. From the studies done it would seem that the temple was never completed. The 10 meter high columns are not yet grooved. Its position and its state of conservation make it majestic and scenic.

The theater was built on the top of Mount Barbaro, on a site that was already a place of worship in previous centuries. It has a highly scenic position, with a splendid panorama of the sea and the hills that can be seen as far as the eye can see. It was built in the 3rd century BC according to the dictates of Greek architecture. It rests partially on the rock below and partially on retaining walls. The cavea of ​​over 60 meters is made of local limestone blocks. With two staggered entrances, it can hold up to 4,000 people and in summer it is used for evening theatrical performances.

During your visit to Segesta you can see the ancient walls of some neighborhoods of the city, some monuments relevant to the medieval Segesta, the sanctuary in the Mango district and other ancient remains. 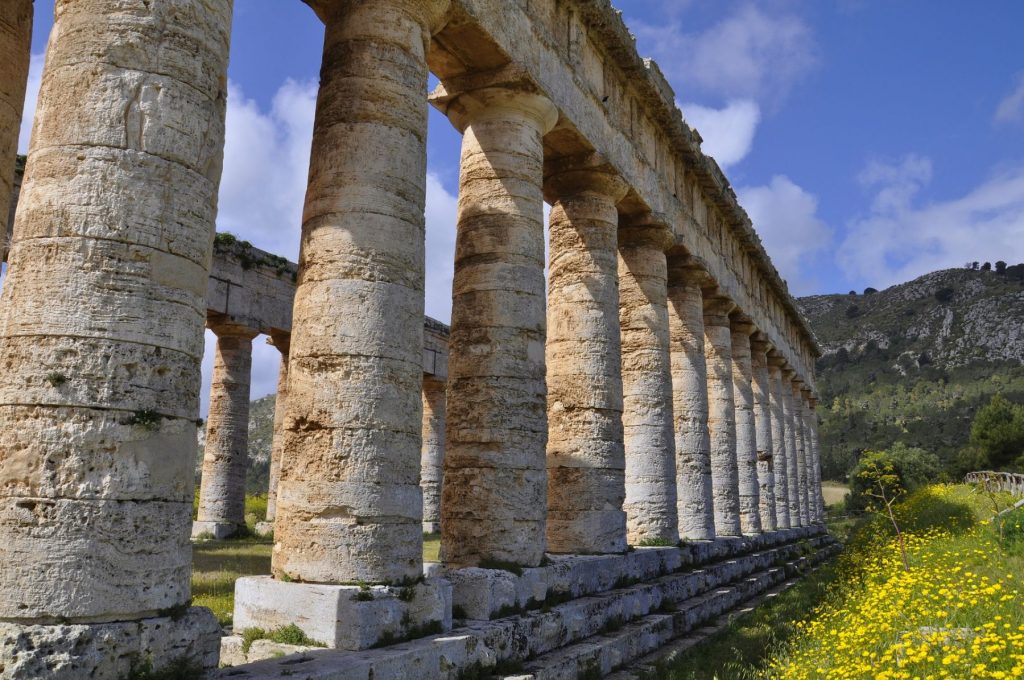 Selinunte was an ancient Greek city, located in the municipality of Castelvetrano, along the southern coast of the province of Trapani. The name Selinunte derives from “selinon” (celery) that grows spontaneous and lush and that was reproduced in the coins issued by the city. Founded around 650 BC, it reached its maximum splendor between the sixth and fifth centuries BC, reaching even one hundred thousand inhabitants. It was the westernmost Greek colony in Sicily, bordering the Carthaginian area.

In continuous antagonism with Segesta, it was definitively destroyed in 409 BC. by the Carthaginians. When the city was destroyed the population was largely suppressed or enslaved. Although in some subsequent periods it was partly rebuilt, it no longer reached its former glory. The final blow was inflicted by the earthquakes between the sixth and ninth century AD, which reduced the city to a pile of ruins.

Today it is the largest archaeological park in Europe. It has an area of ​​270 hectares and is divided into the areas of the Gaggera Hill to the west, the Acropolis to the center, the Manuzza Hill to the north, the ancient settlement, the eastern hill and the necropolis. The entrance to the park is from Marinella di Selinunte or from the Triscina district.

The acropolis is located on a limestone plateau overlooking the sea. You can still admire the walls and towers, the urban layout, with two main intersecting streets, in turn intersected by other minor ways. The temple E (temple of Hera) and the temple C have been almost completely reconstructed. Of the other temples one can admire the remains, partly standing and partly still in the position in which the earthquakes left them.

Among the many finds, the most important is the Efebo di Selinunte, a bronze statue dating back to the fifth century BC, which can be admired at the Civic Museum of Castelvetrano. 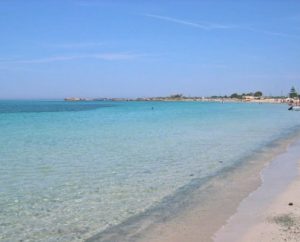 Between Trapani and Marsala, after the Saline reserve of Trapani and Paceco, is the Stagnone Lagoon. It is a vast area of ​​the sea with a depth of just over a meter, rich in posidonia seagrass, and closed to the west by the Isola Lunga and by two other small islands (Scola and Santa Maria) and right in the middle of the lagoon the Island of Mozia.

Mozia was an ancient Phoenician city, located on the island of San Pantaleo, and founded around the 8th century BC, according to the stories of Thucydides. The fortifications surrounding the island date back to the 6th century BC. The city reached its peak between the 6th and 5th centuries BC. In 400 BC, it was completely destroyed by Dionysus of Syracuse and was almost completely abandoned. Seat of monastic orders, excavations began around 1800. Schliemann excavated in 1875, without obtaining results. It was bought by Joseph Whitaker (archaeologist and heir of an English family who found fortune in Sicily with the production of Marsala wine) at the beginning of the 20th century. Whitaker began the excavations in 1906, and continued them until 1929, revealing important findings.

Today you can get to Mozia with a small boat from the mainland near the salt pans of Ettore Infersa where salt is still cultivated in the traditional way, handed down over the centuries. In a few minutes you’ll reach the island. You can admire the remains of the walls, whose length was 2.5 kilometers and covered the whole island; the necropolis with funeral urns (Tofet), the remains of houses, and a structure that looks like a dry dock or a port for docking ships of the time (kothon). The main feature of the island is the Whitaker Museum, built to house all the local archaeological finds. You’ll find the marble statue from the Hellenistic era- Giovinetto di Mozia– of majestic and of rare beauty with an elegant, finely worked tunic standing 180 cm high. The statue has repeatedly represented Italy in important international events. In recent years, she has been exhibited at the British Museum in London, at the Getty Museum in Los Angeles, and in London during the last Olympic Games.

The ancient city of Erice or Eryx is located on the summit of Monte San Giuliano about 750 m above sea level. According to Thucydides, Erice was also founded by Trojan exiles who, together with the native population, would give rise to the Elymian population. It is also mentioned by Virgil in the Aeneid. Eryx was conquered by the Aghlebids in 831 and was renamed as Cebel Hamid (in Western sources Gebel Hamed, meaning Mountain of Hamid). It was ruled by the Arabs until the Norman conquest. In 1167 the Normans renamed it Monte San Giuliano, a name maintained until 1934. 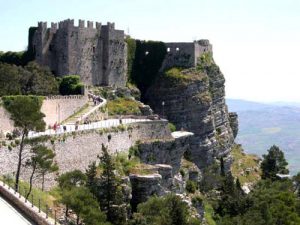 The visit to Erice is fantastic! You’ll find yourself in a medieval wonderland with fascinating churches, houses, cobble stone streets and views like none other. The city is surrounded by walls that date back to the 8th century BC. They are called cyclopean walls for the size of the boulders that make up the lower part. The upper part of the walls dates back from the Carthaginian to the medieval period. The town was once called the “city of a hundred churches” which were formerly connected by underground tunnels allowing for communication. Today the passages are mostly underground and traces can be found during the restoration of existing buildings.

You’ll want to visit the Norman castle from the twelfth century, built on the remains of the ancient Roman temple of Venus Ericina; the Castle and the Towers of Balio, the Garden of Balio, the Pepoli Castle, the Spanish Quarter, Porta Trapani, Porta Carmine and Porta Spada. Of the abundant churches, don’t miss the Real Chiesa Madrice with its tower, the Church of San Giuliano, and the Church of San Martino.

Erice is also famous for its almond sweets that can be tasted in countless shapes and colors and the Genovese (sweets with yellow cream), which tourists enjoy in large quantities when they visit!

It is connected to Trapani by three roads (about 13 km) and by a funicular.

Other Points of Interest

Mazara del Vallo boasts the Church of Sant’Egidio, where the bronze statue from the 4th century BC, the Dancing Satyr, is housed. The Museo Archeologico Baglio Anselmi di Marsala in Marsala houses the only example of a Punic ship known today and dates back to before 241 BC. The stern and port side were found, as well as objects that were part of the ship’s kit and cargo.

Trapani is truly an experience not just for its incomparable waters, but also for its history.

Post Views: 1,591
Redattore
The Beaches of Trapani
Syracuse, Sicily: The Magdalen Pathway and Other Points of Interest