It was always dear to me, this solitary hill,

and this hedgerow here, that closes off my view,

from so much of the ultimate horizon.

But sitting here, and watching here,

in thought, I create interminable spaces,

greater than human silences, and deepest

quiet, where the heart barely fails to terrify.

When I hear the wind, blowing among these leaves,

I go on to compare that infinite silence

with this voice, and I remember the eternal

and the dead seasons, and the living present,

and its sound, so that in this immensity

my thoughts are drowned, and shipwreck

seems sweet to me in this sea.

These are the words of the famous poet Giacomo Leopardi. If the reason for your visit to Recanati is the well-known writer, this article is perfect for you! With this itinerary, you can experience Leopardi’s birthplace and immerse yourself in the exact environment of his poems.

Giacomo Leopardi was born on June 29, 1798, in Recanati, then part of the Papal States, to one of the noblest families in the country. The first of ten children, he began a self-taught education and then moved on to his father’s library. His dedication to studying lead him to have physical, back, and vision problems. In addition to this, his excessive religious upbringing and strict social conventions deprived him of much-needed affection.

During his adolescence, he transitioned from astronomical and classical studies to poetry. In 1817, he began writing Lo Zibaldone where he collected his ideas and thoughts. Over the following years, the deterioration of his sight leads him to philosophy, thus entering an atheistic and materialistic period from which The Infinite was born. In 1822, after a disappointing trip to Rome, he returned to Recanati where he wrote the Operette Morali in which his philosophical ideals regarding human unhappiness and the passage from historical pessimism to cosmic pessimism become evident. After short stops in Milan and Bologna, Leopardi finds hospitality in Tuscany. Pisa and Florence are the epicenters of his intense social relationships. On returning home from the Pisa, he writes To Silvia. Finally, he spends the rest of his life in Naples in a villa on Vesuvius where he publishes almost all his works. He died here at the age of 39 on June 14, 1837. 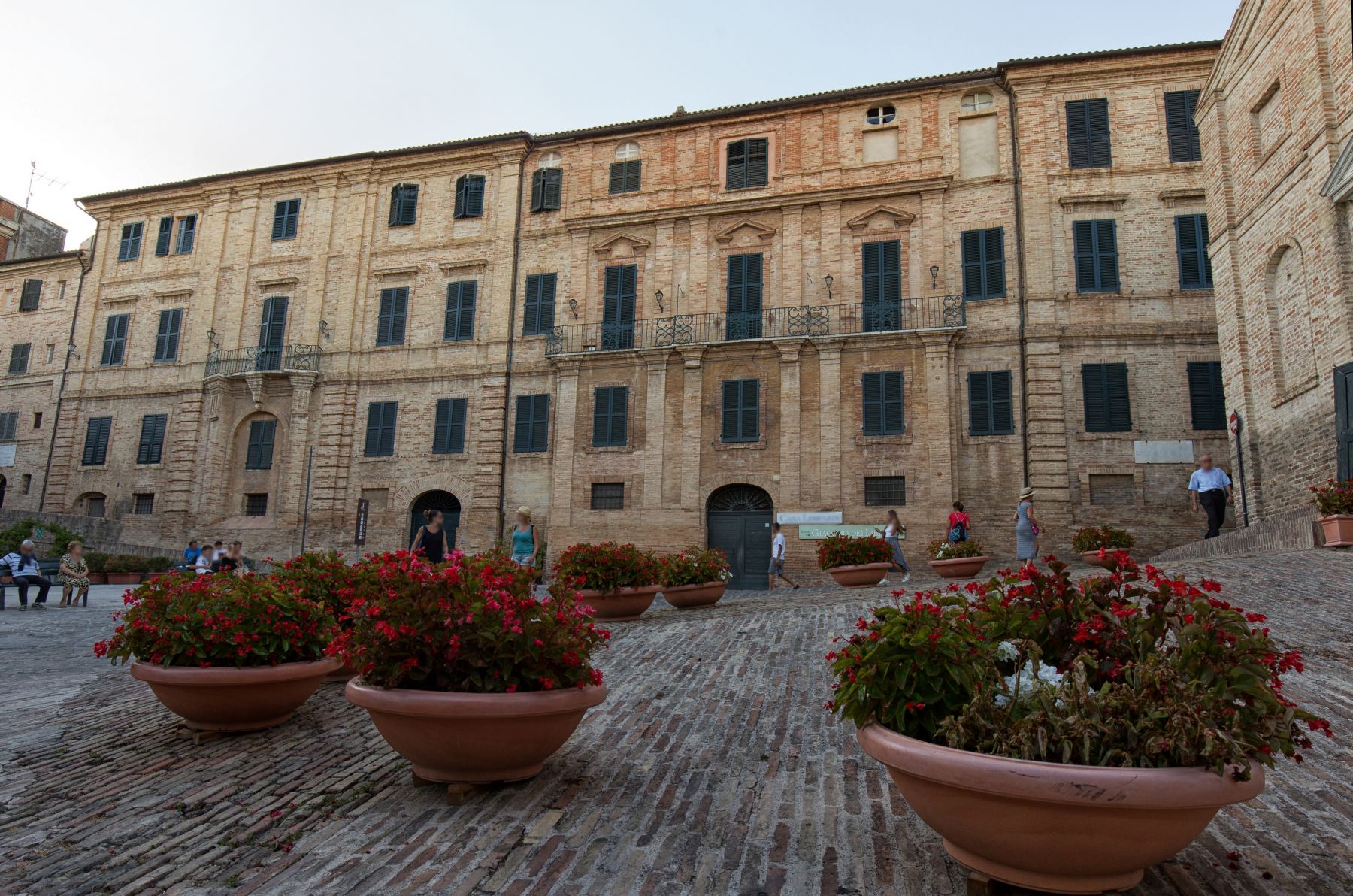 Casa Leopardi is the place where the poet was born and raised. From the outside, it’s not a very impressive building on an artistic level, as it is characterized by simple lines classic of eighteenth-century architecture. Inside, there are authentic books and decorative paintings belonging to Leopardi. By visiting his home you’ll be able to retrace what the poet himself saw, felt and then wrote in his lines and in his verses.

The year 2020 has much in store for Palazzo Leopardi. Beginning March 21, the private apartments of the Leopard family, which have been inaccessible for almost 200 years, will be open to the public. The visit will be extended up to the bedroom and the window from which the poet admired the moon and drew inspiration. Also, the sitting room where he spent time with his siblings Carlo and Paolina, the garden from where he could see the Sibillini Mountains. They are the places of the author’s daily life that will allow the visitor to identify with him.

For more information about tickets visit the official website (Italian only).

In front of Leopardi’s birthplace, we obviously find the square that inspired the famous poem Saturday Night in the Village. In this square, we also find other inspirations of the poet: Silvia’s house. Silvia’s house, actually Teresa Fattorini, is located on the first floor of the stables belonging to the Leopardi family. Originally it housed horses and carriages, while upstairs were the employees’ quarters. Built in 1796, it was later restored and opened to the public in 2017. Silvia’s house is composed of small rooms furnished with characteristic furniture of the time. 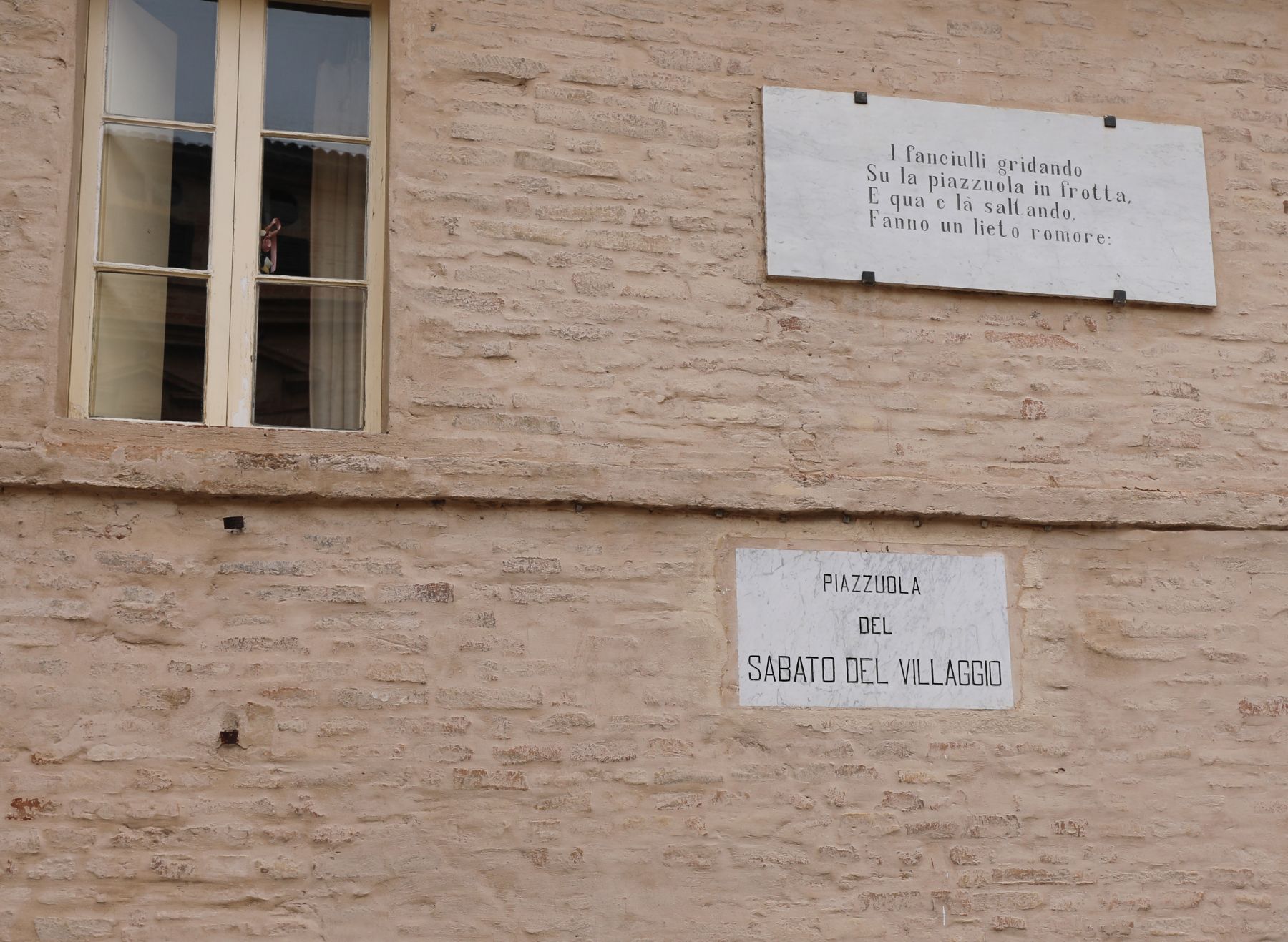 The hill mentioned in The Infinite is located very close to Leopardi’s house. It is nothing other than a hill of Mount Tabor, the poet’s favorite destination for his walks. With direct access from home through a vegetable garden, Leopardi went here to admire the view and then draw inspiration from it.

The Tower of the Solitary Bird

The tower is part of the San Agostino Church complex and cloister in Recanati. It was a source of inspiration and remembered in the poem The Solitary Bird, but was, unfortunately, damaged by lightning in the late nineteenth century.

As we all know, Leopardi did not live his entire life in Recanati. The poet visited several regions and cities during his short life by meeting friends and colleagues who are remembered in his works. The best known is certainly Ranieri, whom he met in Florence and with whom he then moved to Naples in 1833. His travels also took him to Milan, Bologna, Pisa, and Rome, which according to the poet was not as beautiful as he imagined. He died in Naples in 1837 and it is here that his tomb is found, precisely in the Vergiliano Park.