Caccamo: A Medieval Village in the Palermo Province

Not by any means one of the more well-known towns when visiting Sicily, Caccamo is truly a gem that very few people get the chance to see. Not many tourists wander about the streets here and those who do are likely visiting a relative.

Caccamo is a small medieval village with about 8,000 residents that rises up on a rock promontory in the province of Palermo. At  500 meters above sea level, in order to reach it, you’ll need to drive along the Termini-Caccamo. With several hairpin turns, the road snakes up the hill making it perfect for car races. For years it has been a favorite for rally races which generally take place in August. I wouldn’t advise trying your hand at racecar driving here, however!

As soon as you reach the village, you just need to go up the main street and park your car before reaching the old town. In a few minutes, you can easily reach the feudal castle, the largest in Sicily and the symbol of Caccamo. The castle is in a strategic position because it overlooks the whole valley of the San Leonardo river and its majesty represents the power and richness of the lords of the past.

So many legends have been told about this castle, making it all the more intriguing. Among the most famous is the story of a Lord’s daughter who had fallen in love with a soldier. When the Lord found out about their romance, he sentenced the soldier to death and locked his daughter in a cloister where she supposedly died of a broken heart. Legend has it that the daughter’s soul still wanders the castle during a full moon holding a pomegranate in her hand and reciting a nursery rhyme that tells of eating all the seeds without ever touching the membrane of the fruit. If none of the grains fall on the floor, then the lucky man will find a treasure. 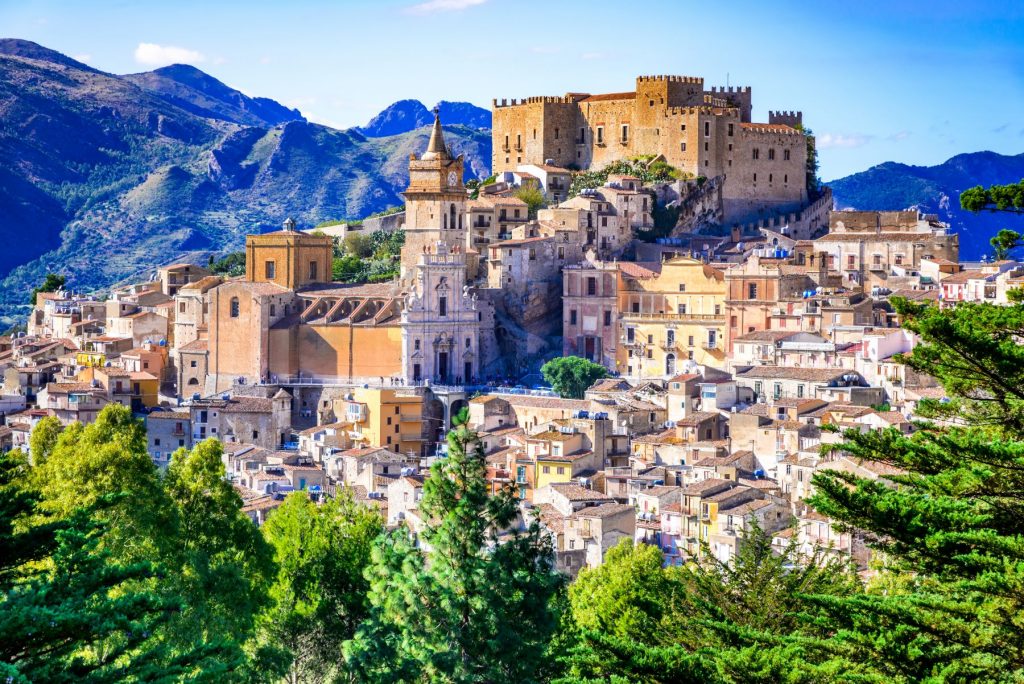 Just below the castle, where granaries were once located, you’ll find the famous restaurant and pizzeria called ‘A Castellana”. It serves traditional Sicilian dishes, delicious pizza, and is more of a museum than a restaurant with its interior paying homage to the farming traditions of the area.

One of the most important events in Caccamo is that of the “La  Castellana  di  Caccamo” (the Landlady of Caccamo). It is a long parade that commemorates all the nobles over the past eight centuries. This historical reenactment is really a sight to see with people dressed up in period costumes as lords, nobles, ladies of the court, knights, and soldiers. Keeping with tradition, one beautiful girl is honored with the title of Castellana di Caccamo and symbolically given the keys to the castle.

Going up the main street, you’ll meet a descending staircase on the right which leads to the beautiful church of San Benedetto alla Badìa. Its facade may be uninviting and you may be tempted to skip a visit here, but that would be a grave mistake. Those who do enter are astounded by its exquisite Baroque interior.

Adjacent to the church and near the old slaughterhouse, you can experience the thrill of walking down the narrowest alley in Italy (about 63 centimeters). Although, you might want to try it before you binge on all Caccamo’s delicacies!

The Old Butchery Canzone is a historical building that dates to 1918 and serves up Caccamo’s famous sausages ranging from ingredients like walnuts, pistachios, honey from Sicilian black bees.

Another traditional event is the Sausage Festival that typically takes place in October. People come from miles around to enjoy a delicious sausage sandwich known as “paninu ca sasizza”  and stroll through the streets filled with the aroma of smoking sausages.

If you want yet another adventure that is very close by, you can get back in your car and head towards Lake Rosamarina, just 3 km away. Rosamarina is one of the biggest artificial lakes in Sicily and one of the most important water supplies to the city of Palermo. Recreation and leisure activities abound for both adults and children like hiking, kayaking, fishing, and camping.

Or maybe you’d prefer relaxing by the water and ordering a cocktail while enjoying the seductive view of the lake at sunset. Maybe you’ll even daydream about that handsome guy you met today in Caccamo whose name, like 90% of the males in town, was surely Giorgio.