Castles Along the Riviera Romagnola

An itinerary from Rimini to Tivoletto

Are you spending your holidays along the Riviera Romagnola and feel like exploring beyond the sea? Follow us on a visit to three castles, a half-day journey inland and through history.

The journey starts in the hills near Rimini, where only a few kilometers away you’ll find Coriano. 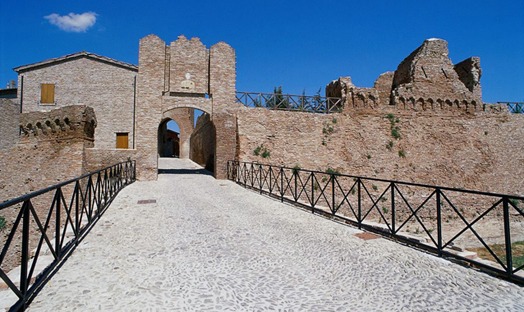 Nowadays, Coriano is more famous for being the hometown of Marco Simoncelli, a motorcycle driver who died in 2011 during a race in Sepang, Malaysia. You can even visit a museum dedicated to him. In the past, Coriano was the first outpost of the Malatesta family out of Rimini. Its function was to protect the city from several raids and to give shelter to the guards. Built in 1328, today only rubble remains, but walking among the old stones is still a charming experience.

After Coriano, you can travel down the valley of the Conca River and turn right in Osteria Nuova. Pass the bridge and continue to Montefiore Conca; you can’t miss it because the castle will be right in front of you. At a certain point, the street will become very steep, so drive slowly along the curves and imagine medieval chariots going up the street to the village of Montefiore to sell eggs and vegetables. Upon the hill, stands the castle of Montefiore. 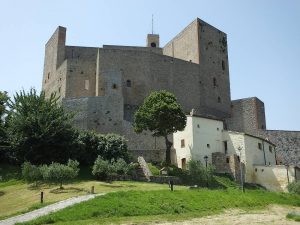 The fortress of this village, Rocca di Montefiore Conca, was built exclusively for defense before 1300, and less than half a century later, it had already been expanded to include residences. It was one of the most important castles of the Malatesta dominion until the mid-1400s. Afterward, it passed from a noble family to another because of its strategic position in the valley, as you will see from its terraces with panoramic views. You can visit the interior of the castle and appreciate archaeological finds and works of art. The castle also hosts many cultural events and the whole town of Montefiore is part of the circuit of “Italy’s most beautiful villages“. 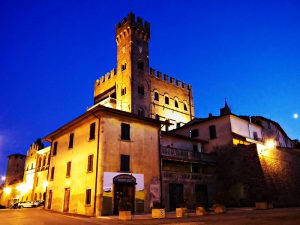 As you leave Montefiore, you’ll see the castle of Tavoleto in the distance. Driving from Montefiore, you may not see any cars along the road. When you arrive near the castle, you will see how different it is from Montefiore. In fact, the existing castle is of fairly recent construction and was built on the remains of the old castle. But the history of the castle of Tavoleto is older. Tavoleto was the border of the Montefeltro family’s dominions, and its castle was the scene of numerous battles between them and their enemies, the Malatestas. Thus, when Federico da Montefeltro defeated Sigismondo Malatesta and finally conquered Tavoleto, he destroyed the existing castle to build another one in its place (designed by Francesco di Giorgio Martini). This happened in 1458, and the castle withstood until the mid 19th century. Since then it has undergone numerous rebuilding efforts. Tavoleto was also the scene of a bloody battle during World War II when it was assaulted and freed in a knife fight by a Gurkha battalion. In fact, the town was important because of its strategic position which you’ll see from the panorama of the Foglia River Valley from a large terrace on the road, right in front of the castle, before returning to Rimini and its beaches and sea.