Churches in Sicily: the Cathedral of Caltanissetta

The Church of Santa Maria la Nova in Caltanissetta

The Church of Santa Maria la Nova in Caltanissetta is in the city centre. Built in the the mid-16th century, it took this name to distinguish itself from the old Mother Church, Santa Maria la Vetere. Although the building was completed in 1620, the church was operational before the official date.

It was given the title of the Cathedral only in 1844, when Caltanissetta became a bishop’s see. 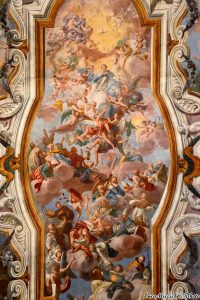 The “original” church didn’t have the current Latin-cross plan, but the part behind the main altar was missing. The change took place after the 1943 bombing, during World War II.

The Americans attacked Caltanissetta with the intention of blocking the communication paths of the Germans. The latter, in the meantime, had already abandoned the city, but the news did not reach the American air force, which decided to attack the city. However they did not hit the Central Station, but many buildings including the Cathedral. The Americans repaid the city for their mistake, and with these funds the church was renovated.

The building today has a basilica plan  with a nave and two aisles, divided by powerful pillars with a vaulted roof. The whole vault was frescoed by Guglielmo Borremans, a Flemish painter working in Caltanissetta in the 18th century, by using a very particular style: the “trompe-l’oeil”. The painter painted on the ceiling as if there were large windows open to the sky, where it is possible to see scenes of Paradise. Around it, there are episodes of the life of St. Peter and St. Paul.

Borremans also made the altarpiece dedicated to the Virgin, painted in warmer and less luminous colours. 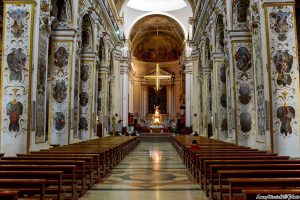 Along the aisles there are several chapels, each one preserving works of art. In particular, the crucifix realised by Frate Umile da Petralia, the silver simulacrum of the Immaculate Conception, the great painting of Our Lady of Mount Carmel made by Filippo Paladini, other beautiful works by the local seventeenth-century painter Vincenzo Roggeri and the chapel dedicated to St. Micheal Archangel, patron saint of Caltanissetta, have a great importance.

Outside, the church has a white façade, characterised by two superimposed orders: the lower one is divided by pilasters, in which the three access portals open, and the upper order, consisting of a central body surmounted by a triangular tympanum and two side bell towers.

If you are in Caltanissetta, do not forget to visit another beautiful religious building, the Church of San Domenico.