Civita di Bagnoregio is by far the most mysterious, magical place I have ever visited. It is on the World Monuments Fund watch list as an “endangered” city. It is known as “the dying city” in Italian because in the winter months, the population dwindles to an average of 10 people and in the summer, rises to only about 100. Daily tourists during the summer months can increase the number of visitors to around 2,000. 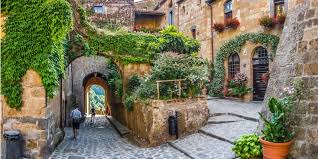 It was built by the Etruscans in the 6th century B.C. upon the soft, volcanic rock known as tufa or tuff. It is precisely for this reason that it is in danger of collapsing under its own weight due to erosion.

Since 2017, it has also made the UNESCO World Heritage Site list (although currently under the title of “tentative lists”). In the meantime, the city has begun charging a small entrance fee of only 5 euro per person which has helped to cover some of the restoration and maintenance costs.

Bagnoregio is the main town prior to crossing the bridge into Civita di Bagnoregio; both places offer accommodations, although Civita is of course, more limited. We visited in mid-April in what would still be considered “low season”and our “home base” for the trip was Lake Bolsena, which is only about a 30-minute drive. Another option would be Orvieto, also majestically perched upon a tufo mountain, which would also make a great home base.

We parked at the closest parking lot available to the bridge itself and posed for numerous photos while walking across the bridge towards Civita. There weren’t many tourists on the day we visited which made for wonderful photo ops at every turn. You can easily pick up a few souvenirs, have lunch, and meander through the entire town in a couple of hours.

It was a relaxing afternoon away from the noise of the big cities and completely worth the visit. It had been on my bucket list for some time, and I hope for posterity’s sake that it never disappears back into the earth and that it will still be perched there, upon the mountain, for centuries to come.