What to See in Rome: The Pantheon

The Italian capital city of Rome is Italy’s number one tourist destination and one of the top travel destinations in the entire world. The cradle of Western Civilization offers everything from ancient history to some of the best designer shopping in Europe if not the world. There is so much to see here that one could easily spend an entire year and still not see it all! So for those of us that only have a few days, we have compiled a detailed guide of the Eternal City’s top 5 sights that you absolutely cannot miss. Let’s begin with the Pantheon.

The Pantheon (luckily for English speakers this is one of those rare monuments that is written the same in both English and Italian) has been continuously ranked as the number one tourist attraction in Rome seeing a whopping seven million visitors each year.

This architectural marvel holds some astounding records including the best preserved, the largest brick dome in the history of architecture, the first temple built for the commoners, the first Roman pagan temple to be consecrated into a Christian church, and the most imitated of all classic monuments. The great Michelangelo himself is quoted as saying that the Pantheon was “the design of angels, not of men”.

Closing in on its 2,000 year anniversary, the original structure dates to the year 25 BC! The Pantheon as we see it today was completed around 128 AD under Emperor Hadrian who succeded Trajan during the height of the Roman Empire. Interestingly, Hadrian had the Pantheon’s inscription read “It was built by Marcus Agrippa, son of Lucius, consul for the third time” crediting the original building some 150 years prior.

Its astounding construction has stupefied the greatest architects the world has ever known. Sixteen granite columns each standing over 14 meters tall adorn the entrance. Some of the rose-colored granite was imported from Aswan in ancient Egypt. The bronze door is a massive 7-meters tall. 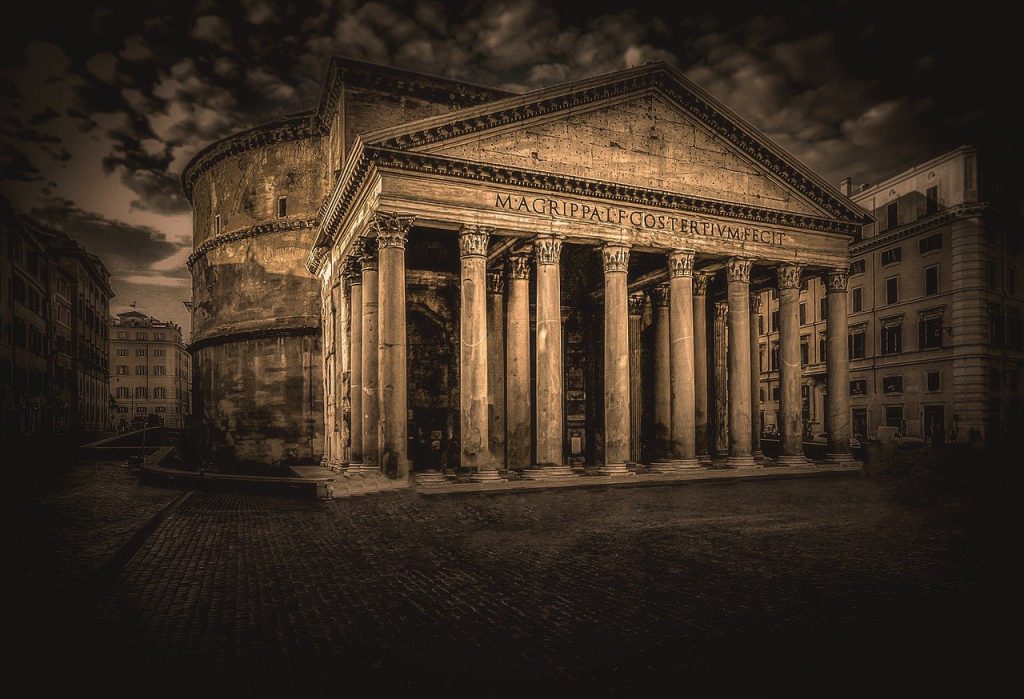 You’ll enter into an ethereal space that is a perfect sphere, meaning that the height of the dome is equal to its diameter, 43 meters or 142 feet to be exact. It was purposely designed this way so as to place all of the gods at the same level. At the center of the dome is a perfect circle, the Oculus, which was designed to allow natural light in as there are no windows. But what about when it rains? Of course, the brilliant architects thought of this too and created the floors with a perfect gradient so that water would drain effectively.

Its design inspired Renaissance architects including the great Palladio. All the way across the Atlantic Ocean, even Thomas Jefferson’s Monticello estate was modeled after the Pantheon.

The Royal Family and Raphael

Today, the Pantheon is the burial place of some of Italy’s royal family including Vittorio Emanuele II, his son Umberto I as well as Umberto’s wife, Queen Margherita. It is also the burial site of one of the greatest painters of all time, none other than Raffaello.

Since its conversion into a Christian church in the year 609 AD, the Pantheon still serves as the Basilica of Santa Maria dei Martiri where mass is regularly held. A reservation is required on the weekends as well as Green Pass at this time.

Visit the official website for complete details before your visit.