In Italy, there are places where reality and imagination are lost in a vortex of unparalleled mysticism. This is the case of Craco, an ancient uninhabited village that stands out on the heights surrounded by the typical gullies, in the heart of Basilicata, a few steps from Matera. A place both fascinating and gloomy, which as of late has been rediscovered by tourists and has become a must-see destination for those seeking an authentic and unique experience of this area known as Lucania.

It’s been referred to as a “ghost town” like many others similar to it throughout the Italian peninsula, but today, we could say that Craco has somewhat come back to life. The history of Craco is long, ancient, and at times painful. This small village in the province of Matera, has remained imperious and solemn on a hill, surrounded by boundless wheat fields and with the characteristic gullies known as calanchi, deep furrows carved into the land around the perimeter.

Because of its uniqueness and history, Craco is one of the most sought-after destinations in Lucania which lures visitors with its legends and mottled beauty. Unfortunately, in 1963 the residents had to leave the village when a landslide practically destroyed it and made it inaccessible, forcing the inhabitants to move to the new municipality of Craco Peschiera. 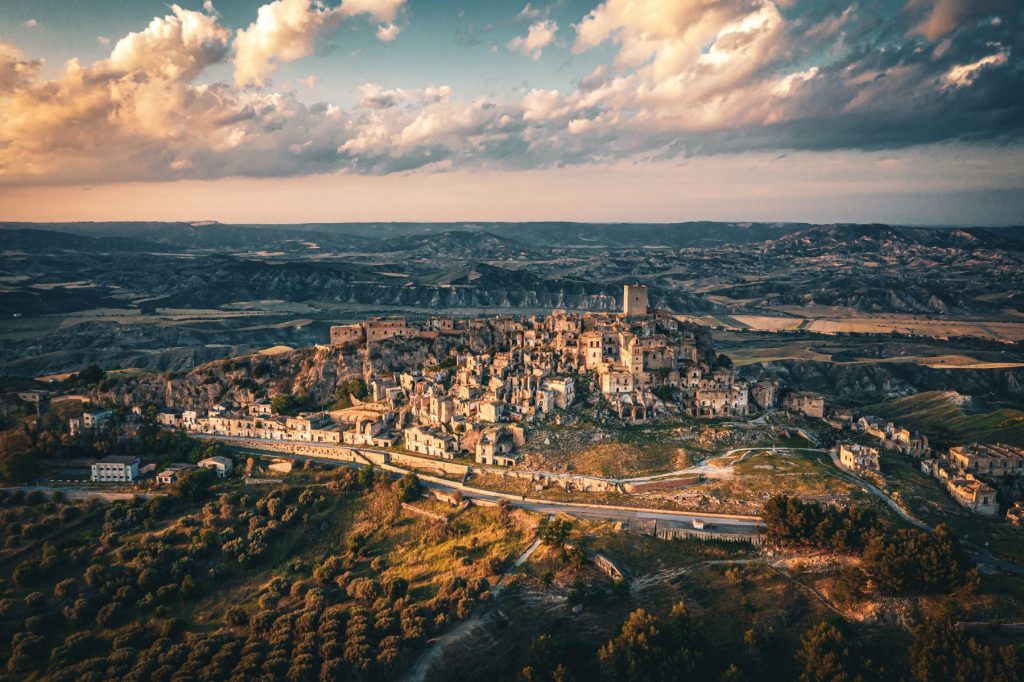 What remains of the original village today are some ancient houses perched on the rock, positioned around the Norman tower that dominates the entire scene.

Those who have visited it swear they have heard the voices of the ancient inhabitants echoing in the distance, along with the tolling of the bells of the archaic churches now torn apart and made into corpses by the landslide; almost as if to maintain a millenary history, that of a heart that has stopped beating but has remained there, intact, where time has stopped.

To date, a well-calculated revitalization effort has allowed the ancient village of Craco to be opened to the public and draw tourists, by reservation and through a safe, guided tour that allows you to enter the heart of the ghost town.

Craco’s origins, including the name and the settlement itself, are subject to various interpretations and controversy. The first and most accredited dates to 1060 with the name of Graculum (small, plowed field) which referred to the wheat fields in the surrounding area. However, the first traces of human presence were found not far from the historic center and consist of tombs from the eighth century BC, before the area came under the control of an Italo-Byzantine ecclesiastical order.

The ancient village has ruins that date between 1154 and 1168 when it developed as a military nucleus of great importance during the reign of Frederick II. In 1276, Craco was already a university center, an important element that is also identified in the architectural remains left in the city.

Unfortunately, the village is also known for its history of banditry. First in 1807, and then in 1861, Craco was attacked by bandits, and destruction and death ensued. As the story goes, a group of bandits was shot under the bell tower of the main church, the Chiesa Madre.

At the beginning of the twentieth century, the imminent threat of a tragic catastrophe would become evident. Craco’s eventual fate was sealed due to its location and the composition of the land. Its sandy, clay hill marked by ever deeper chasms and cracks, eventually gave way in 1963. The colossal landslide that interrupted Craco’s life forever forced the population to flee their homes and take refuge in the valley in the new municipality of Craco Peschiera.

Today, the wind, the voices of Craco’s ancestors, the destitute remnants, the memories of a timeless story, are the only things that remain of Craco, the ghost town. 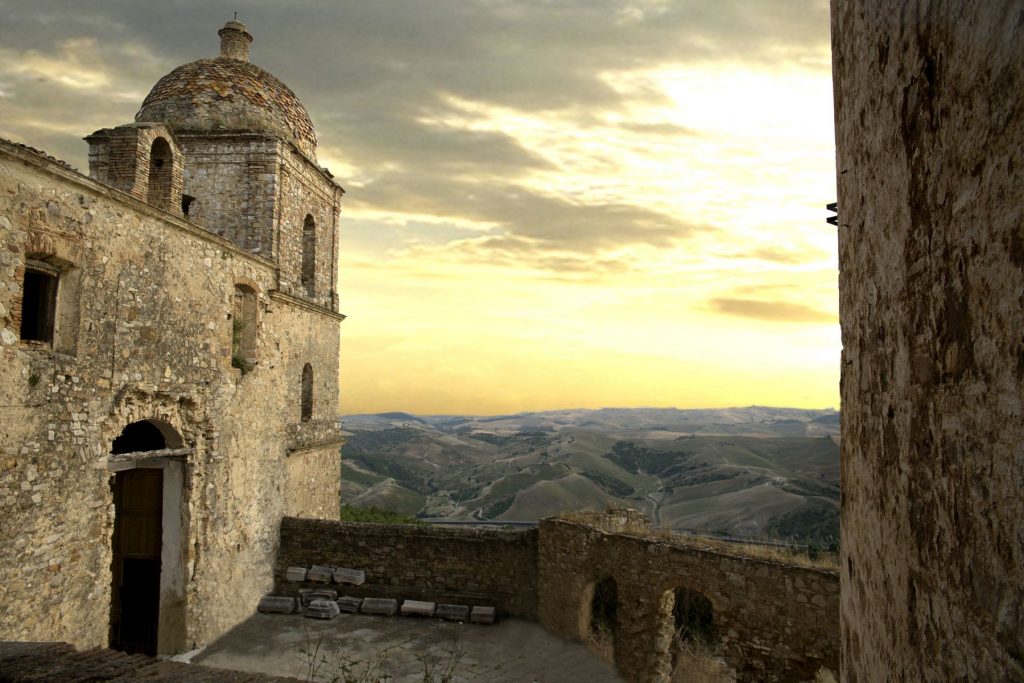 Despite its sad end, Craco remains, a custodian of a past that fascinated visitors absorb in awe.

From afar, at first glance, you’re captured by its mystical beauty and enticed to reach out and touch it with your hand. The entrance is protected by a large gate, which leads to the avenue of the tour of Craco Vecchia. The guided tours have safety measures in place requiring visitors to wear helmets to protect them from falling debris.

The tour takes visitors along the main roads and central square in the historic center. If you close your eyes you can almost visualize the noble palaces, such as the frescoed Palazzo Grossi near the mother church, that would have been bustling and flourishing in the 15th century.

Another historical place along the tour is Palazzo Carbone, a monumental building dating back to the end of the 15th century, which was later renovated in the 18th century.

After looking at what was once Palazzo Maronna, the tour arrives at the historical and artistic core of Craco: the 13th-century tower, il torrione. Although only the original entrance and splendid tower remain today, its commanding position still warrants the name of “castello” by the locals.

From the tower windows, your gaze falls among the fields, prairies, and the distinctive gullies furrowed deep into the clay soil so unique to this land. 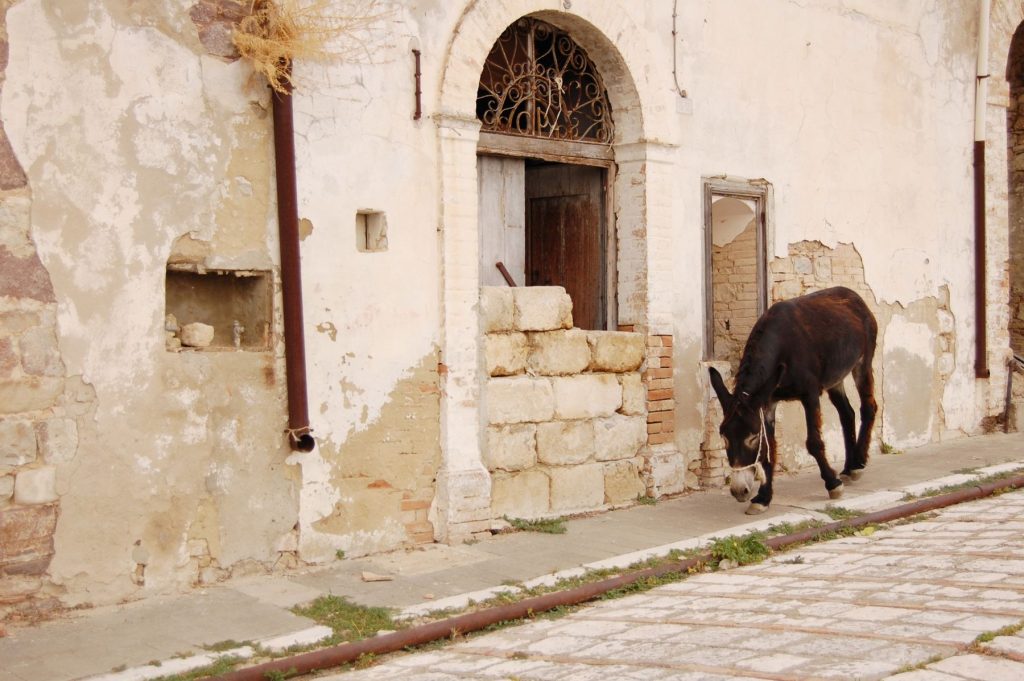 The landscape here is so particular and scenographic with its semi-skeletal architecture and surreal atmosphere, it makes Craco a highly coveted film set for various genres.

The ancient center of Craco has seen numerous projects take shape from the end of the 70s through the new millennium. Both Italian and non-Italian directors, overcome by the magnetism of this place where time seems to have stopped in its tracks, have made good use of the landscape for their screenplays.

The first famous film shot in Craco was Christ Stopped at Eboli (1978) by Francesco Rosi; followed by King David (1985) by Bruce Beresford; Il Sole di Notte (1990) by the Taviani brothers; Ninfa Plebea (1996) by Lina Wertmüller; and La Lupa (1996) by Gabriele Lavia. At the end of the 90s, came Terra Bruciata (1999) by Fabio Segatori and the unforgettable The Passion of the Christ by Mel Gibson in 2004, who chose Craco as the setting for the scene of Judas’ hanging.

Craco Vecchia is a must, no one would object to this, but while you are here, it is definitely worth exploring the surrounding area and discovering even more of what Lucania has to offer.

Outside ancient Craco is the Franciscan convent and the Church of San Pietro Principe degli Apostoli, built around 1630 (today, only the apse remains).

The Mother Church dedicated to St. Nicholas is striking for its majestic entrance, a feature that is also found in the bell tower. It is built in three architectural styles and topped by an external dome, majolica tiles, and a bell-shaped structure.

Traveling further north from Craco Vecchia, you can visit the Church of the Madonna della Stella, dating back to the first half of the 17th century and whose main facade has an ornate wooden door, dating back to the mid-nineteenth century. The main altar has been preserved, in carved marble with inlays, as well as a wrought iron gate placed between the nave and the presbytery. The structure was affected by the disastrous landslide that hit the Craco area, so much so that, originally, it occupied a space undoubtedly larger than what is now visible. 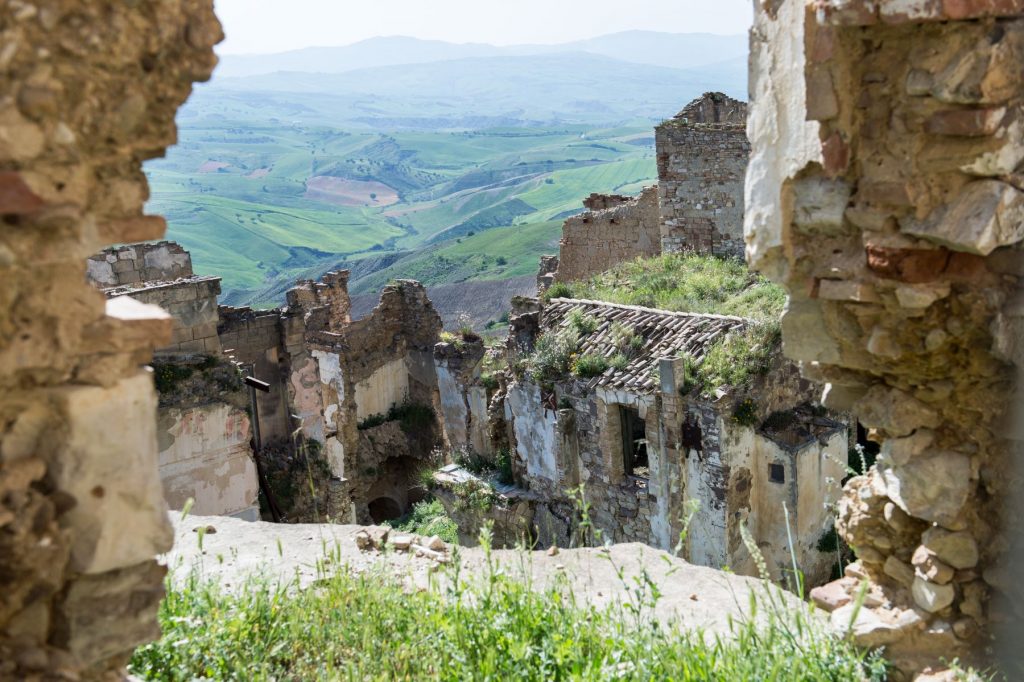 If you get back on the state road, you’ll see the remains of the small Church of Sant’Eligio, precious because, despite the catastrophic events, it still retains part of a marvelous fresco depicting the Crucifixion with Saints, dating back to the 16th century.

In short, Craco is one of the most fascinating ghost towns in Italy: uninhabited, yes, but not completely abandoned. A place where history and legend have come together and given life to a landscape that is both unique and shocking at the same time and guaranteed to be unforgettable for those who venture.