What to See and What to Do in Ispica

When you hear about the area Val di Noto you immediately think of that part of south-eastern Sicily washed by the Ionian Sea and the Mediterranean Sea characterized by the most important cities of the provinces of Ragusa and Syracuse. Seasonal tourism combined with gastronomy, cultural events, beautiful architecture and landscape, and religious celebrations are the real flywheel of the local economy. The symbolic and elegant city of Noto, pearl of the Iblei, cannot be missed.  It’s a destination for tourists from all over the world who are attracted by its architectural beauty, local gastronomic goodness and its slow, gentle flow of everyday life.

Ragusa Ibla, another nearby city, captivates with its nightlife, characteristic medieval streets, churches and squares. It also happens to be the set of the most beloved Italian television series seen all over the world, Il Commissario Montalbano.  Also destined to cinematic success and growing tourism is the city of  Scicli. Its natural beauty blends well with the stately buildings with grotesque masks and flowered balconies in the baroque architectural style. During the Easter feast of the Risen Christ (called U Gioia) those same balconies hold hundreds of believers who overlook the square.

There is also Modica, a city of noble families where the centralized power of the whole Val di Noto once resided.  Modica has become famous all over the world thanks to an old artisan chocolate recipe, now a symbolic product that characterizes the territory. Let’s not forget the many churches scattered around the city, some of which are very important, such as the Duomo of San Giorgio, a marvelous impressive building in Baroque style that dominates the upper and lower parts of the city.

There are many other towns in Val di Noto that lie hidden like rare flowers in a meadow yet to be discovered. Ispica for example, known for tourism for its Forza Park archaeological site and for the ancient beauty of its Caverns. Ispica also offers 13km long natural trails, seventeenth-century and eighteenth-century basilicas, Art Nouveau buildings.  Its beaches boast crystal clear water and very fine sand like that of an African desert. 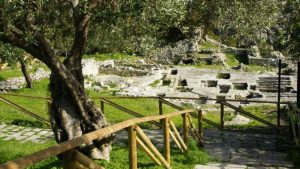 The archaeological area and necropolis of Parco Forza

If you have several days te explore Ispica’s vast territory you’ll be able to appreciate it in its entirety, because Ispica is a city that loves to be uncovered slowly and reveal many surprises. Your tour could start right from the archaeological area of ​​the Parco Forza, walking through paths carved into the rock and visiting the natural caves that people used as a refuge during the Second World War. From here you can enjoy a panoramic view of the caverns of Ispica, just as the lords of these lands did centuries ago from the balconies of the “fortilitium”, the fortified citadel. The citadel was the impregnable residence for centuries of the noble family of Statella who dominated the territory from 1493 until 1812. The frightful earthquake of 1693 that caused the whole Val di Noto to shake, destroyed the city walls forever and left only the foundations of the marquise palace and part of the pavement still in tact. Inside the archaeological area you’ll find a panoramic amphitheater, a small museum containing relics from different periods ranging from the first colonization of the island until the twentieth century. The mythical cave of 100 stairs is a deep cavity dug into the rock that descends up to meet an underground aquifer used for the water supply of the castle. 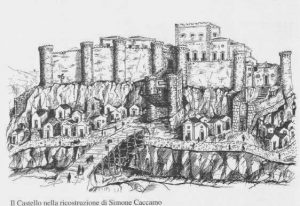 After visiting the archaeological park you can go trekking and descend down to the Cava, or cavern and enjoy the fascinating natural trails or you can go up towards the modern historical center on a stair path that’s been carved into the rock. You’ll be amazed by how many natural caves you’ll encounter along the way that have been re-purposed by the locals into pretty residences complete with natural gardens and panoramic verandas. These small houses with gardens formed the Jewish quarter of Cartidduni. At the end of your climb you can visit the lovely Carmine district, with its church dedicated to the Madonna del Carmelo and the Convent of the Carmelite sisters. Going back to the central square called Unità d’Italia, you can admire the church of St. Antonio, the Church of Sciabica and the Basilica of Holy Annunziata (Santissima Annuziata). Annunziata is home to an important event that takes place on Good Friday, called “u patri cruci” in dialect, which is a sacred representation of the martyrdom of Christ on the cross that attracts many visitors from all over Sicily, Italy and from the world. As you walk the adjacent streets, you can admire the many stately Art Nouveau buildings and their large balconies that were witnesses of the glorious past of Ischians between the eighteenth and nineteenth centuries. 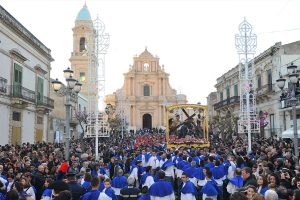 Some of these buildings have been part of a renovation project led by private individuals, others by the region of Sicily. Palazzo Bruno di Belmonte is the current municipal seat and an undisputed example of early 20th century Art Nouveau architecture present throughout the Val di Noto. In the center of the city in Piazza Unità d’Italia you can admire the solid architecture of the church of the Matrice dedicated to St. Bartolomeo. It is one of the oldest in Ispica and will forever be remembered in cinema thanks to the film by Pietro Germi, “Divorzio all’italiana”. Another noteworthy building is the Palazzo Antonino Bruno with decorative art noveau elements and modica stone balconies that offer a wide view over the whole square. The Basilica of Santa Maria Maggiore and the Loggiato del Sinatra, built by the architect Vincenzo Sinatra and inspired by the Bernini colonnade in San Pietro, also stand out for their importance. The church is considered the most important of the city and is the setting for the feast of Holy Thursday, the day when the confraternities walk in procession, “patri a culonna”,  to pay homage to the statue of Christ scourged at the pillar. Exactly like the manifestation of Christ at the cross on Good Friday, the two statues are carried in arms in a procession from late afternoon until late at night on two separate days. They’re carried through the main streets of the city paying homage to some churches and places considered sacred along the way. The Holy Week period remains the most important for the city of Ispica, which awakens from its winter lethargy. The streets are full of tourists coming from all over the world and people pour into the various ceremonies so as not to miss the events of the Holy Week. Other places worthy of interest are the Convent of the Franciscan friars of Jesus placed at the top of the walls of the Quarry, lying like a sentinel guarding the city and visible from highway 115 towards Siracusa. It was once considered an important educational center with a library that holds ancient rooms. 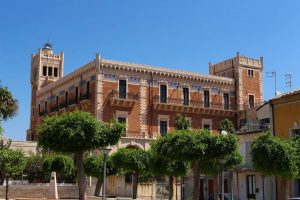 The palace of Bruno of Belmont- now the county building of Ispica.

Val di Noto is not only appreciated for its Baroque and Art Noveau architecture, but also offers a chance to enjoy the local cuisine. If you are a wine and food enthusiast and want to taste the typical dishes of the area, you will find a myriad of agricultural and agritourism  companies.  They offer a relaxing holiday, natural foods, and the best wines of the area. Tourism linked to wine has made great strides in the last ten years, representing one of the main reasons for visiting these rural areas. The establishment of the Denominations of Origin for wine and an intense activity of events by the most important wineries of the territory, has contributed significantly to this increasingly growing tourist flow.

If you enjoy exploring mysterious places, the Catacombs of St. Marco are just 2km from town and the Necropolis of Contrada Crocefia just 3km going towards Modica. represent interesting archaeological sites to visit. If you love being surrounded by nature and birdwatching protected animal species, then go to the Longarini and Cuba Pantani, on the Ispica-Pachino coastal road, where you can admire rare birds such as flamingos, herons, diurnal birds of prey and other protected species.

Finally if you love the sea and basking in the sun on fine, soft sand, take a dip in the crystal clear waters of St. Maria del Focallo. Less than 11 km from Ispica, it’s a place where you can relax and enjoy long summer days at the sea and the lively nightlife. If you prefer more wild places let yourself be enchanted by the charm of the cliffs of the Faraglioni of Punta Cirica and Punta Castellazzo.  In whatever season you decide to visit South-eastern Sicily, you will always find something to do because the endless discoveries of the Val di Noto last not just one season but all year round.