The most colorful time of the year has come, and with it, the cobblestones of the Italian squares are covered with multicolored confetti. Carnival, from the historical point of view, is considered a period of celebration and renewal so much that until the Middle Ages it was called “the feast of madness”. According to the Catholic tradition, however, the Carnival period precedes the beginning of Lent, in preparation for Easter. The name alone makes reference to the tradition of consuming large quantities of food, including meat (carne), on the evening of Ash Wednesday.

The Carnival in Abruzzo takes on another nuance linked to the hard work in the fields. The Carnival period symbolized an end to the long, frigid winter and the sweet awakening of spring and the mild temperatures that gave new life to the agricultural and pastoral traditions in the region.

Today, colorful masks and cheerful costumes invade the squares of the main cities to transform a normal Tuesday at the end of winter into a carefree day for children and adults. 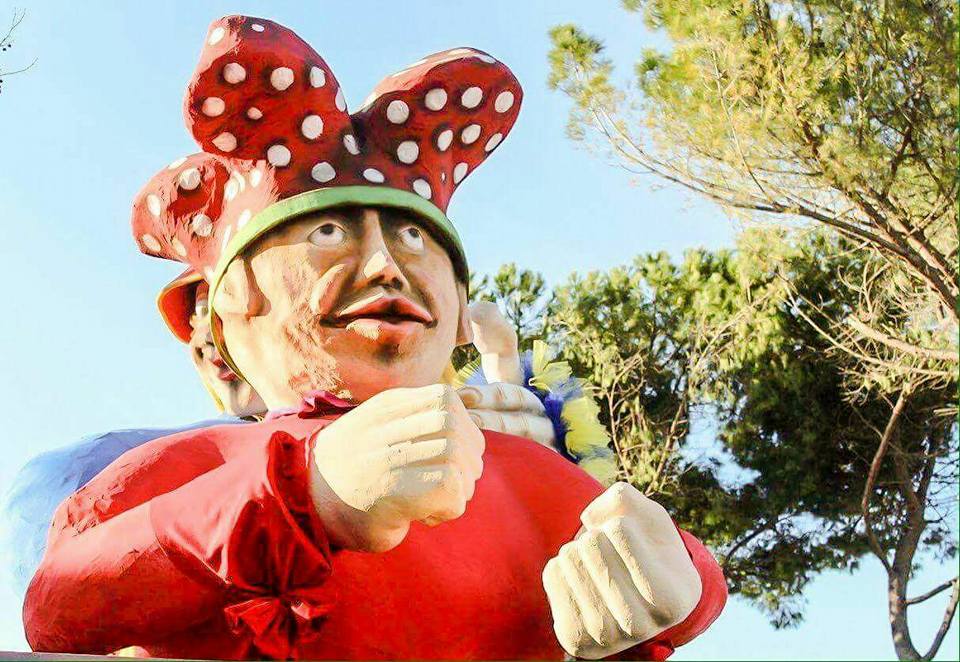 The Carnival of Francavilla al Mare (Chieti province), also known as the “Carnival of Abruzzo”, is the most long-lived in the region and has been celebrated since 1948. This year’s dates are from February 16-25, 2020.

The allegorical floats that parade through the streets of the town are skillfully constructed and decorated by paper mâché masters who unleash their imagination by referring to political, cultural or historical events.

The festive parade would not complete without Patanello– the mask that symbolizes the Carnival of Abruzzo. “Zi Patanè” was an Abruzzese cobbler and sacristan who lived between the end of the nineteenth century and the beginning of the twentieth century. Lover of good wine and taverns, Patanello was famous for his playful jokes.

Thanks to his personality and his cheerful character, he did not go unnoticed by a Neapolitan painter who was on holiday on the coast of Abruzzo. He decided to paint a carnival mask inspired by Patanello. 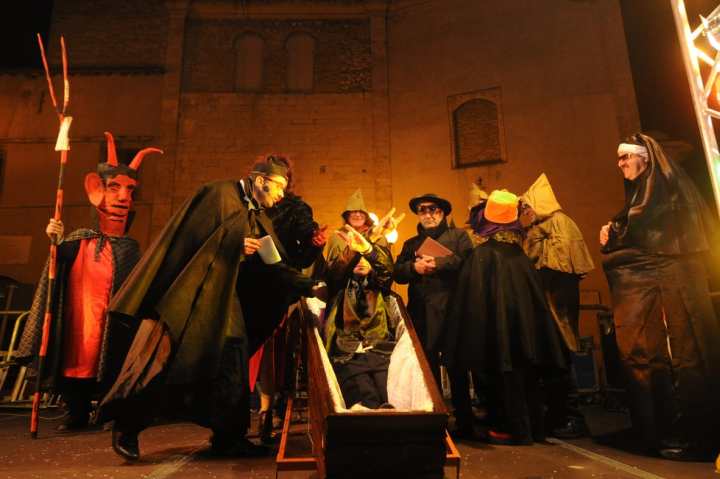 Joyful and colorful, but also gloomy: the Carnival in Abruzzo also has a dark side. In Montorio al Vomano, in the province of Teramo, the death of Carnival is celebrated. This tradition dates back to the late 1920s when some local boys, rebelling against the strict rules that prohibited the Carnival celebrations, decided to host a funeral for Carnival on Ash Wednesday. The traditional procession still winds through the streets of the town but is anything but sad.

Like any self-respecting festival in Abruzzo, the Carnival also boasts its unique sweets. Unfailing and omnipresent, the element that unites the Carnival sweets of Abruzzo, is the oil in which these small and delicious specialties are deep-fried. Cicerchiata, most common in the areas of Chieti and Pescara, are small, fried balls covered with caramelized honey and colored sprinkles. Frappe or chiacchiere are fried strips of dough sprinkled with plenty of powdered sugar.

The famous Abruzzese poet, Gabriele D’Annunzio, included all the famous imagery of Carnival in his rhyme, but also made a clear reference to Ash Wednesday when he reminds us, “dalla polvere era nato, ed in polvere è tornato.”

“From dust you came and to dust  you shall return.”

Post Views: 837
Redattore
In the Footsteps of Shakespeare: the Castles of Romeo and Juliet in Montecchio Maggiore
Regional Park of Bracciano-Martignano in Lazio