What if one morning we were to wake up and find ourselves in a world of jousting and horsemen some 500 years ago?

It’s the morning of the last Sunday of Carnival: the historic city center of Oristano in Sardinia is suddenly filled with the sounds of drum rolls and trumpeting; a majestic procession escorts a herald on horseback; the announcement of an imminent equestrian joust is made and citizens and horsemen are convened into the square facing the cathedral to witness the race… It’s the Sartiglia.

Twice a year, on the last Sunday and Tuesday of the Carnival festivities, the citizens of Oristano (located on the central western coast of Sardinia) and tourists from all around the world convene to relive the spectacular race. Since the 15th century, the ancient Sartiglia race has been at the heart of the Sardinian tradition. 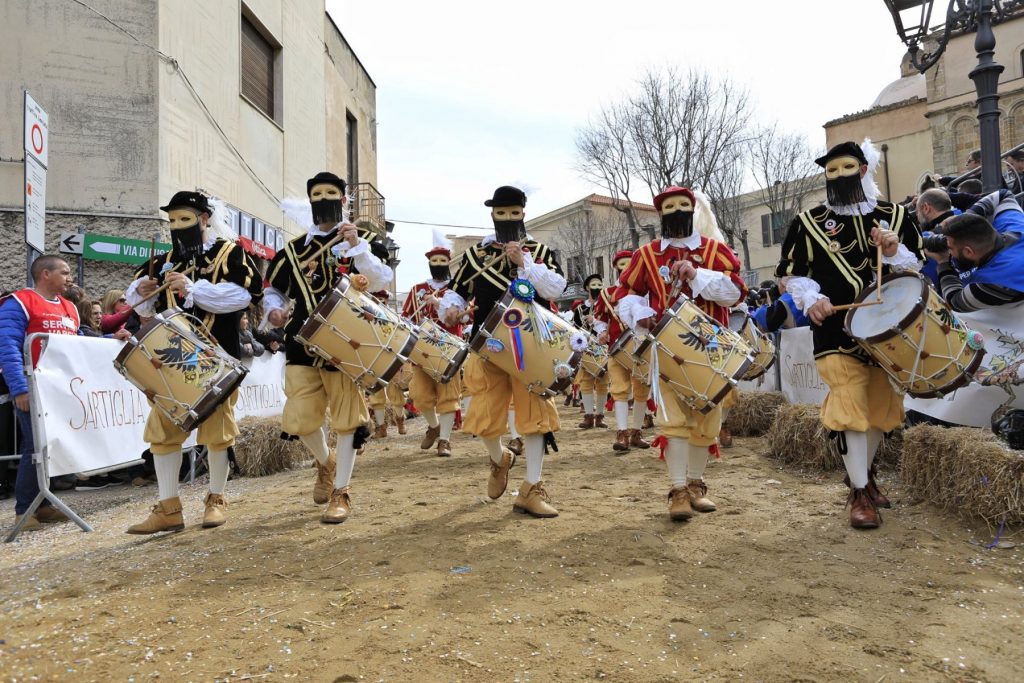 Curated by the ancient Farmers’ and Carpenters’ Guilds, the jousting ritual begins and adheres to a specific and solemn ceremony. During the morning of the race, su Componidori (the lead jouster) partakes in the dressing ritual and puts on the ancient ceremonial clothes and mask. Once dressed, his feet will not be allowed to touch the ground until the end of the Sartiglia. Only the spectators who received a special invitation will be permitted to watch the ceremony. Everyone else will be watching on the maxi screen in the Eleonora d’Arborea square.

The lead jouster then climbs onto his horse from the platform and rides to the cathedral square holding his scepter made of violets that symbolize the forthcoming spring. Among the jubilation, applause and drum roll, among the bright colors of the traditional Sardinian costumes and of the horses’ harnesses, the challenge begins. Su Componidori and the horsemen’s aim is to skewer the silver star hung above the street with the point of their sword, while on horseback of course. The race is a showcase of exciting skills and an amazing exhibition. The first phase of the festival officially closes with sa Remada, the incredible performance by the lead jouster, who blesses the community with his scepter while riding in a completely reclined position.

But the emotions are just beginning- it’s time for the pariglie, in which groups of three horsemen ride side by side at full gallop and prove their limitless courage by carrying out breathtaking acrobatics on horseback. The pariglie come out one after the other and will leave the audience breathless until the sun sets when after one last incredible parade, the horsemen and su Componidori will retire for the “Undressing” rite. This time, the audience can watch and celebrate the lead jouster and the end of the Sartiglia. If you’re lucky, you might just run into a horseman on his way back from the race and he might give you one of the many colorful ribbons that decorate his horse: a good luck charm for the new year.

The celebration will carry on until night time, among laughter and the delicious aroma of the traditional Sardinian sweets zippulas. 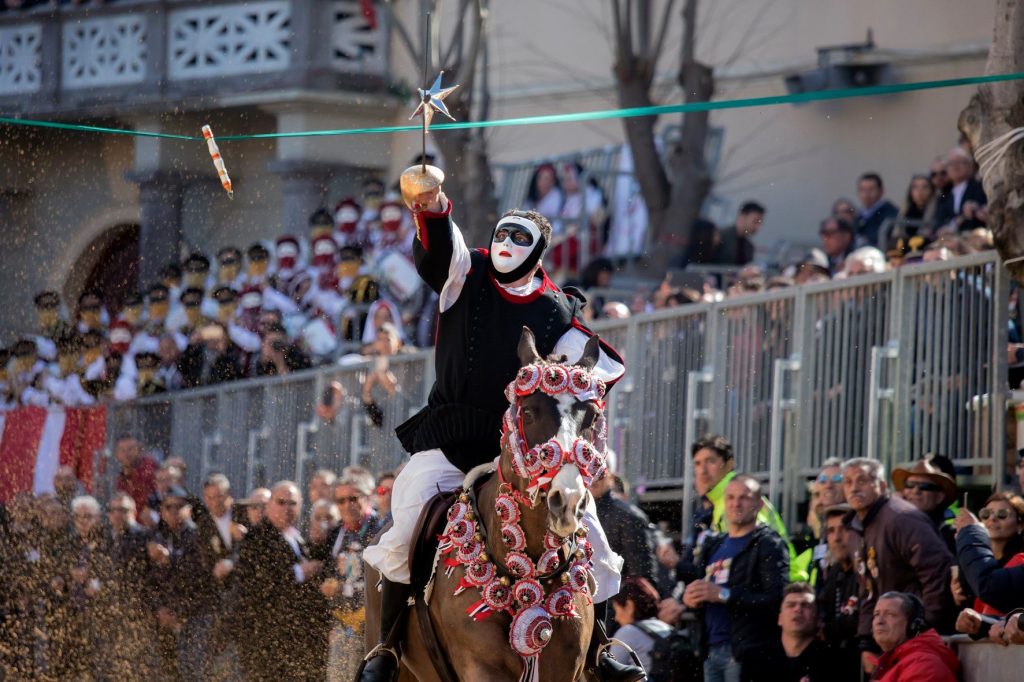 So, there you have it- an original and exciting way to spend Carnival.

I can still remember my first Sartiglia. I was just a little girl, dreaming of costumes and streamers. I can remember the merry atmosphere of the feast, the rhythmic and hypnotic sound of the horses’ hooves on the cobblestones, the colorful ribbons that feasted my eyes everywhere I looked, the rustling sound of the masaieddas‘ dresses (young girls dressed in traditional Sardinian costumes). I hear the joyful shouts every time a horseman skewered the silver star; I see the thrilled gazes around me every time a horseman, standing on his mates shoulders, riding at full gallop, performs his acrobatics. The air is consumed with dust as the horses hurtle down the street. I remember leaving the festival with butterflies in my stomach telling my mum that I wanted to become su Componidori. Back then, I didn’t know that a daydream could become reality- female Componidoris do actually exist. I wanted to ride, to take a chance as a lead jouster, to take part in that ancient, amazing and mysterious magic that pervaded the city on that festive day that seemed to be frozen in time.

In the end, I didn’t become a horsewoman and I have never skewered a lucky charm star. I simply saved a colorful ribbon, a precious gift that is part of my memories, and an extraordinary desire to go back to that moment.

This year the Sartiglia takes place on February 23rd and 25th and in my opinion is an event for the entire family that cannot be missed.