After tremendous success in recent years, the Dromos Festival is back in Oristano ready to amaze, provoke, and entertain its guests. This year’s theme is Casta Diva!

An annual theme serves as a common thread for the festival’s conferences with national and international guests, concerts, and exhibits all in a festive and welcoming atmosphere. The musical talents are among the best in the business performing in the most suggestive locations in the territory of Oristano. This year the festival will take place from July 7th to August 31st.

Some of the themes in years past have been: “Prigioni”, about mental, spiritual and cultural clutches; “Il segno di Eva”, dedicated to female independence and freedom; “I have a dream- L’utopia necessaria”, about the prospect of social changes and the utopian dream of a better society.

To commemorate the fiftieth anniversary of 1969, Dromos will bring us a new theme for reflection- “Casta Diva”. It’s the name of the aria sung to the moon in Bellini’s opera Norma. The theme commemorates the fiftieth anniversary of the first lunar landing (30 July 1969), when  three US astronauts placed the famous sign with the words: “Here men from the planet Earth first set foot upon the Moon. We came in peace for all mankind” and changed history forever. In the same year, between August 15th and 18th, the world of rock music metaphorically went to the moon with the historic Woodstock festival. Only four months later, that achievement was immediately eclipsed by the violence and tragedies of the Altamont Free Concert in California.

The twenty-first edition of the Dromos festival will delve into the dark side that brings us together as human beings through music and through art in all its forms.

Everyone is a moon, and has a dark side which he never shows to anybody.
Mark Twain

The festival concerts and events will be held in various spectacular locations in the Oristano province including: the ancient Roman thermal baths of Fordongianus, the verdant amphitheatre of Bauladu, the woods of Mitza Margiani in Villa Verde and many others!

During your stay, I recommend you visit the archaeological site of Tharros, the site of Fordongianus, the natural area of Villa Verde and the Nuragic sites in Neoneli– just to name a few of the beautiful attractions in the area. If you want to experience true Sardinian traditions, then you definitely won’t want to miss the lorighittas festival (typical handmade Sardinian pasta) in Morgongiori on the first weekend of August. 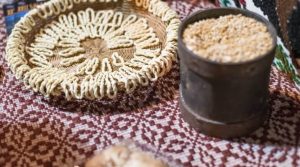