Summer 2018, has already begun. The weather is proof.

If you haven’t booked your holidays yet and are looking for beaches, sun, and also culture, the Frontier Cinema Festival in Marzamemi (Syracuse province) is perfect for you! From September 12-15, 2018, the small, seaside village of Marzamemi in southern Sicily will be transformed. This year marks the 18th edition of the festival.

Marzamemi is a place of culture and cinema. So many directors have chosen the Arabian courtyard, the desecrated church, the “balata”, the Brancati island and the rocks of the area to shoot memorable film scenes (e.g. Gabriele Salvatores’ “South” ). 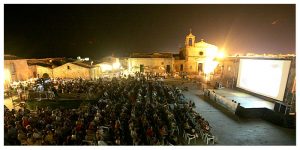 The festival welcomes you with its delicate atmosphere. Its creator, Nello Correale, defines it as “frontier, not as a territory on the margins, but as the part facing the … Cinema of the Frontier is not cinema of Periphery, the waste of a dominant cinema, centripetal, defending itself; But a questioning film, looking at the other, open to the new. A movie that is pointing to the outside, looking forward and not backward. Border Cinema considered in its symbolic value as well as geographical in the broadest sense of the term. Territorial, cultural boundaries, but also of the soul and languages; meeting point between past, present and future. Borderline not as a limit, boundary but as a window on the universe, on the surrounding and opposing universes. Intercultural cinema that looks for the characters that connect among the peoples rather than the divisors. This is the Border Cinema … “.

Marzamemi, a vacation to delight all five senses.