The most important of the traditions of the city of Lodi begins with the arrival of the new year. On 19th January, in fact, Lodi celebrates St. Bassianus, the patron saint of the city. 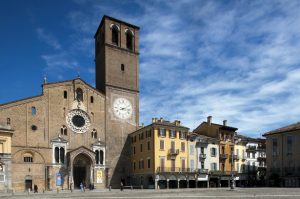 Lodi is a small town in the Po Valley, located between Milan and Pavia. The relics of St. Bassianus are kept in the crypt of the Cathedral and every year, during this day, the faithful citizens of the city venerate them. The Cathedral of the Assumption of the Virgin, or Duomo of Lodi, is a beautiful building with a Romanesque style and it is the oldest monument of the city. In fact, its construction dates back to 1158, and it is said that the first stone was symbolically placed on August 3rd, the day the city was founded.

The St. Bassianus’ festival is not just a religious event. It is very important for the natives of Lodi because it is an opportunity for them to showcase their oldest traditions which have been handed down for years and will live on through these festivals. 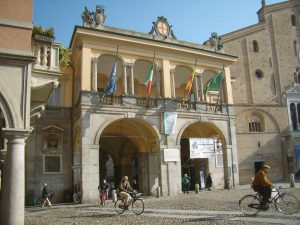 The most important of them is the St. Bassianus’ Fair, which is a collection of stands selling handmade products in the main square of Lodi, Piazza della Vittoria.  This piazza is the only one in the world to be surrounded by arcades on all four sides. It has a diamond-shaped square plan and it represents the heart of the city. The Cathedral and Palazzo Broletto, the headquarters of the municipal administration, with its neoclassical loggia are both located here.

Beginning on the morning of January 19th you’ll be able to taste the typical, local products, the symbols of the territory of Lodi. 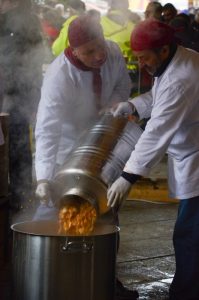 The first is tripe. Called büseca in Lodi’s dialect, it is a local dish made with beans, tomatoes, carrots and celery and it is derived from different parts of cow stomach. It has always been a “poor man’s dish” for its availability even for families that couldn’t afford the luxury of beef.

During the St. Bassianus’ festival, under the arcades of the square, the Alpine residents serve it steaming hot, accompanied by a glass of mulled wine. The residents of Lodi even stand in line to eat it. According to tradition, in fact, tripe is thought to bring good luck in the new year, and it seems that in the past it made the population stronger against the plague.

in Lodi dialect which means that if you eat the St. Bassianus’ tripe you’ll feel good all year long.

If you walk among the stands, you can find other typical products: filsón and raspadüra. 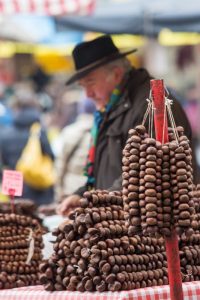 The filsón are braids of roasted chestnuts woven into four rows and hung, tied together with a twine. When they are harvested, they are cooked just a little, then dried and preserved. The chestnuts are harvested directly in Piedmont, in the province of Cuneo. This product symbolizes a tradition that has deep roots in the territory of Lodi. So much so that in the last century, in some areas of the province, there was an actual profession called the filsuné, or the person who harvested, produced and sold them from autumn until Easter.

The raspadüra, on the other hand, is a way of serving the Grana Padano cheese. In Italian, the word means “scraping” and the procedure consists of scraping or shaving off thin flakes of Grana with a special knife. It can be eaten alone or with cured pork meats, especially mortadella, walnuts or mushrooms. You can also use it to top risotto and polenta dishes. 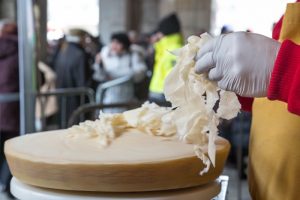 If you have the opportunity to go to St. Bassianus’ festival, you will be taking part in the area’s most traditional and prized celebration and the town anxiously awaits you!