Things to Do in Venice: the Historic Regatta

Venice, one of the most chic places in the entire world, gifts us not only with its sheer existence but also with several events during the year. One of these is the Venice Historic Regatta which celebrates the art and discipline of rowing which has been practiced for thousands of years in the lagoons of Venice. 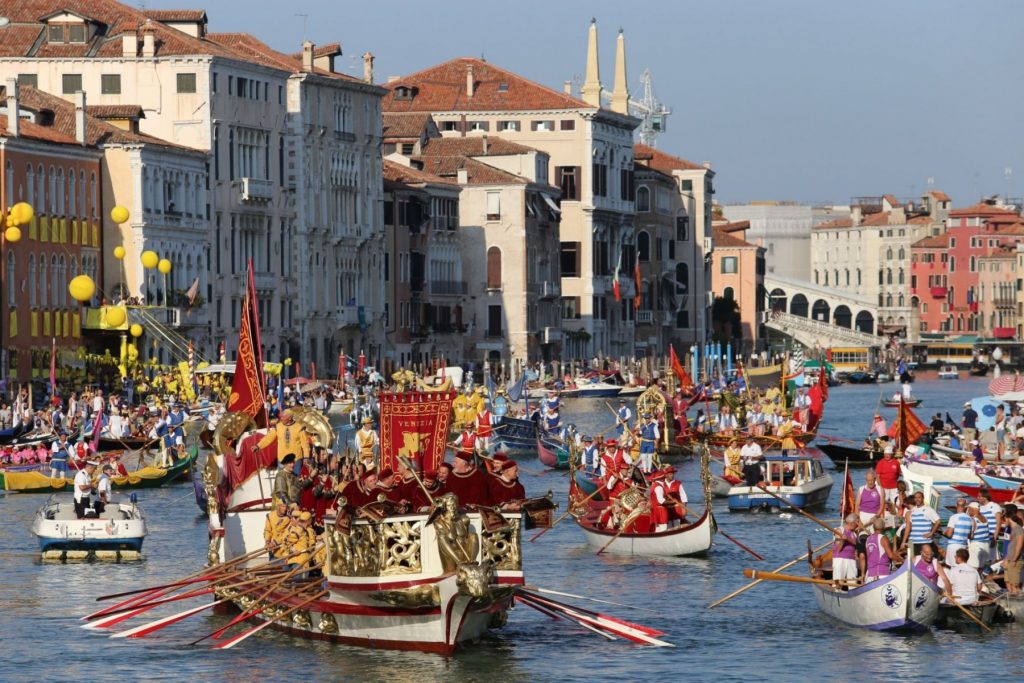 Today, the Historic Regatta has become even more fascinating with the addition of the historic procession on the water that precedes the race. Lots of typical sixteenth-century boats coast through the lagoon with their colorful flags and costumes. They transport the “Doge” and his wife in a fantastic reconstruction of the ancient Maritime Republic.

The Origins of the Historic Regatta

The first evidence of the competitions date back to the 13th century, but they almost definitely would have begun even earlier. Historically, Venice has always had to defend itself and to have the best fleets of rowers. In fact, the word “regatta” itself probably derives from the word aurigare (to compete). Initially, the races were challenges between boatmen or gondoliers and the embellishments on the boats were sponsored by private individuals. After the fall of the Venetian Republic in 1797, the races did not cease to exist, but were instead shifted from privately-funded to public. Then in 1899, it finally took the name that would last- “historical regatta”.

On the day of the regatta, the San Marco basin and the Grand Canal are filled with boats of all kinds (you will probably only recognize the name of one): pupparin, mascareta, caorlina, gondolino, gondola, balotina, sandolo and disdotona. Four competitions ensue which are divided by age and type of boat. Nowadays, the crowds get the most excited about the gondolini regatta. The most important stages are: the spagheto (the cord) in front of the gardens of Sant’Elena; then the paleto which is the fixed pole in the middle of the Grand Canal where the winners are determined; and the machina which is a floating building in front of Ca’ Foscari where the competitions end and where the winners are awarded.

If you would like to witness this elegant, historic event in Venice, here’s the program of events:

August 23: Disnar celebration of Venetian rowing and tradition – info on the website www.disnar.it

August 29: 6.00 pm Blessing of the gondolini, Water procession in the Grand Canal, presentation of the crews

After the caorline and after the gondolini – International Rowing University Challenge
Challenge on 8-oar galleons between the crew of the Ca’ Foscari and Iuav University of Venice and the teams of the Universities of Trento, Suzhou Vocational University and the University of Wien.
Route: from Rialto to Ca ‘Foscari

As if the Historical Regatta weren’t enough, the city of Venice has other events planned simultaneously such as: the artistic installation “The Twin Bottles: Message in a Bottle”; a challenge between the Venice and New York fire departments; the Watermelon Festival and various concerts.

To ensure a perfect view of the Rialto, seats in the floating stand can be purchased online or by calling the Hellovenezia call center +39 041 2424.

For all the details and ticket prices visit the official site of the Historical Regatta of Venice.