Hiking Along the Path of the Gods on the Amalfi Coast

The Path of the Gods, or in Italian, the Sentiero degli Dei, is named after a legend that claims it was the passage of the Greek Gods to save Ulysses from the sirens that were on the island of Li Galli. It is one of the most fascinating hiking routes in the Mediterranean, particularly the Amalfi Coast. 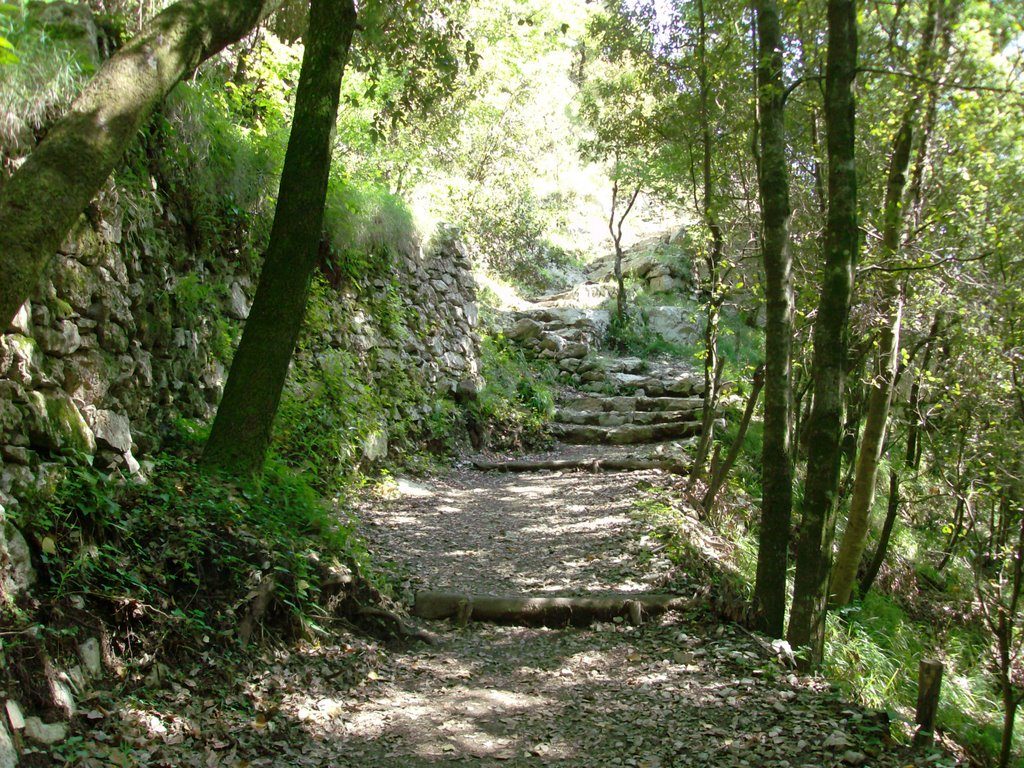 The path was known since ancient times as the only way of communication and commercial trade routes transporting grain, coal, milk, spices, textiles, ceramics, wines and oils between Positano and the plateau of Agerola. In addition, popular legends tell of how the path was used by brigands and criminals who found shelter and security here due to its seclusion. For centuries, it was the only road that connected the villages of the Amalfi Coast.

The 7.8 kilometer-long trail takes about 4 hours and connects Agerola to Nocelle, a hamlet of Positano on Mount Pertuso. Once in Agerola, there is an info point in the square where you can pick up a guide map for the Path of the Gods. It is practically impossible to get lost since the entire trail is marked with red and white signs. 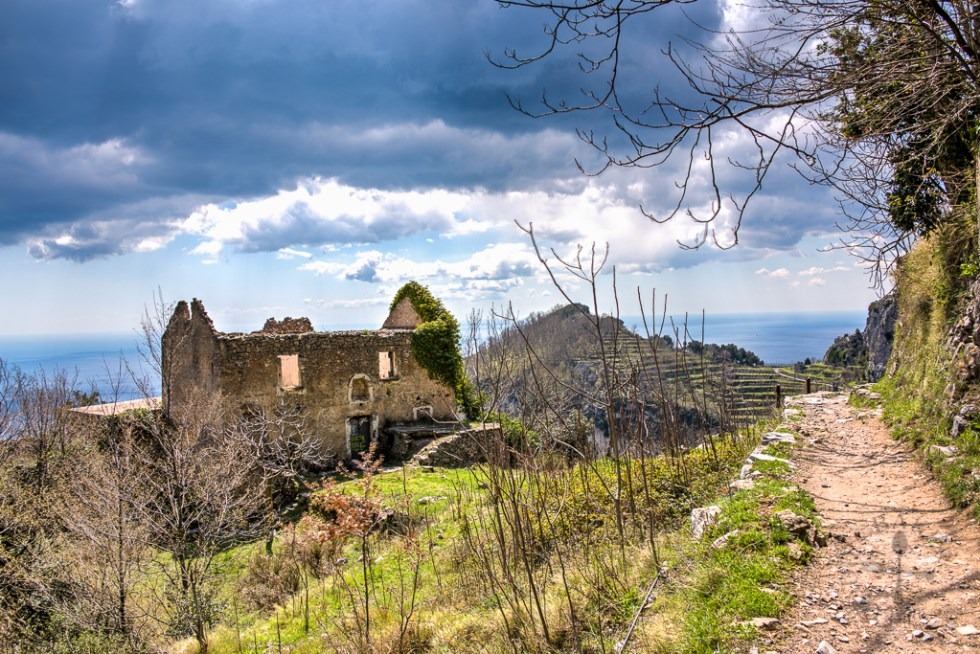 The route starts in Bomerano (632 meters above sea level), from where you can already admire panoramic views. Then you’ll continue through a precipitous descent towards the Grotta Biscotto (528 m), from where a source of drinking water springs up and where you’ll see cliffs and precipices, more than 200 meters deep that are lost in the void. Near it, there are ancient rocky settlements, suspended from the cliff, evidence of Saracen raids.

You’ll continue walking all the while gawking at breathtaking views and interesting stone houses including the famous pistil with its limestone spire. From there, you’ll climb up to a junction: on the right, you can follow a high variant, but this itinerary goes toward the left toward Positano/Prajano/Nocelle. 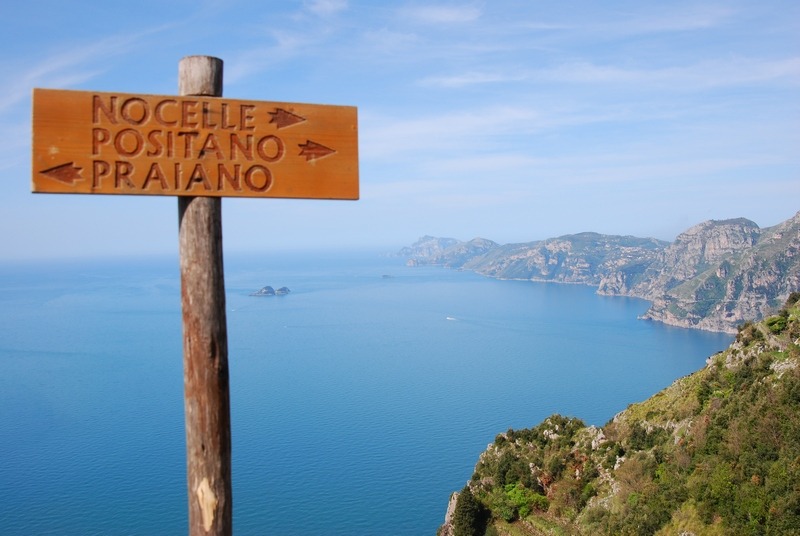 Here the landscape changes dramatically and wide panoramic views open up with the island of Capri, the final part of the peninsula of the Lattari Mountains and the isles of the Gauls.

This area is completely immersed in the Mediterranean scrub and covered with strawberries, heather, myrtle, and fennel. When you enter the woods, it’s as if you’ve entered a completely different world with the scents of chestnuts and maples. 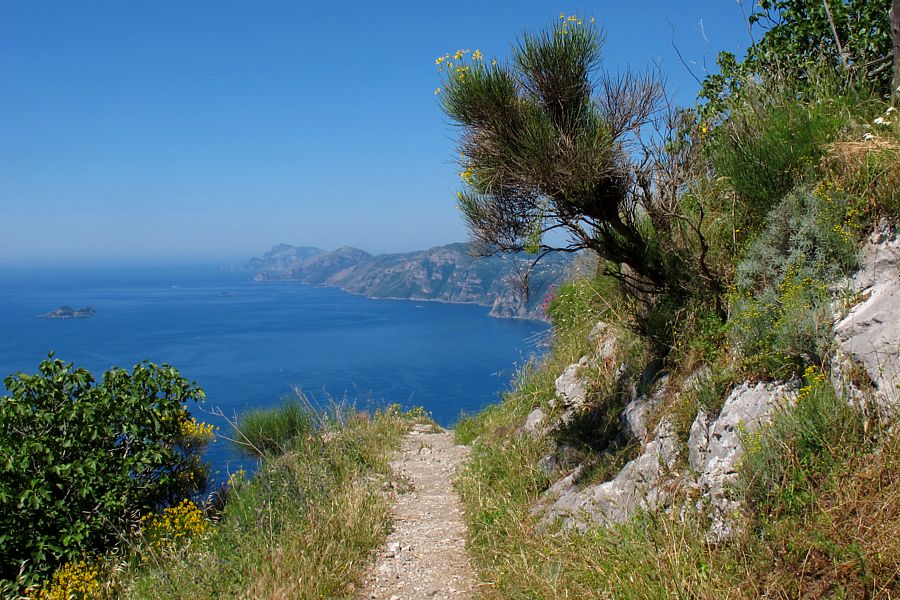 In these places, people, especially the elderly, live and work in harmony with the natural landscape. You’ll probably encounter locals picking fruit from terraced fields, planting seeds, carrying wood by mule or horse, or even hauling fresh goat’s milk. Then you will find a small terrace where you can enjoy one of the most beautiful and enchanting views: a colorful cascade of houses clinging to the mountain ridges that descend vertiginously down to the white marina: Positano.

After the last hairpin bends characterized by rocky ups and downs through prickly pear cactus, the trail meets the first houses in Nocelle (420 m), where you will be greeted by the “Kiosk of the Path of the Gods“. This quaint rest stop is full of the local colors and flavors of the Amalfi Coast, where you can have a refreshing lemonade while sitting on the panoramic terrace.

Unfortunately, or fortunately for the brave, the path does not end here. In fact, in order to continue towards Positano there are two options:

1. Going down 1,680 steps to reach Arienzo and continuing for about 1.5 km on foot to Positano.

2. Taking a local bus to get to Positano.

For those who choose to descend along the 1,700 steps, once you reach the main road of Arienzo, you can continue on foot along the SS163 towards Positano. In the summer, we suggest going another 300 steps to reach the beach of Arienzo where you can relax for a while.

And here the journey comes to an end. But the experience of hiking the same trail that has been trekked for centuries will remain with you forever.

Article by: A. Iasevoli