Himera: a Glimpse of Ancient Greece in Sicily.

Driving from Termini Imerese towards Cefalù, along the SS 113 state road, near Buonfornello, exactly in front of the pizza restaurant Baglio Himera, you’ll see the wonderful Temple of the Victory dating back to 480 BC.
How many surprises are hidden around the corner! 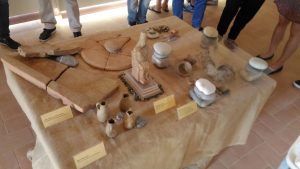 There, you’ll find the new museum centre Pirro Marconi in which the foundings of the recent excavations carried out on site and in the so-called Tamburino level have been exposed. These are part of the wide complex of the Archeological Park of Himera. The sixth archeological excavation campaign, carried out thanks to a twinning between the Palermo Regional Pole and the University of Brema in Switzerland and completed on 21 July, involved professors, archeologists, students and a geophysicist. From the early hours of the day, under the burning Sicilian sun, with deep commitment, passion and dedication they have brought to light important results and interesting discoveries about the use and life of the former Greek settlement.

Located in the middle of the gulf between the promontories of Termini Imerese and Cefalù, at the mouth of the river Imera, in a commercially favourable position for the development of a colony, Himera played an important role in the political equilibrium of central-northern Sicily in the 6th century BC. Founded in 648 BC by the Chalcidians of Zankle, Himera was the battlefield of the famous “Battle of Himera” in 480 BC between Greeks and Carthaginians. Greeks, victorious for the first time, decided to erect the Temple of the Victory in memory of this battle. The Carthaginians, however, obtained their revenge in 409 BC when, following an armed intervention in Sicily, they destroyed some Greek colonies, including Himera, whose inhabitants, after a few years, together with some Carthaginians joined together to found the nearby Thermai Himeraiai, or rather the current Termini Imerese, even if the site was never completely abandoned.

The Archeological Park of Himera is structured on two leves, the lower town with the Temple of the Victory and a small residential district and the upper town with four places of worship and the actual urban settlemement. Here there is the Antiquarium where the most important foundings brought to light during the archeological excavations are exhibited. You can find architectural decorative elements, votive objects such as statuettes, jars for ointments, but also bronzes, terracotta objects and amphoras. 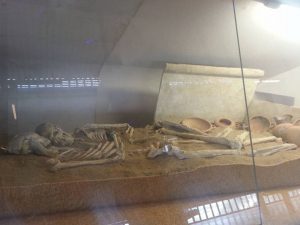 A section of the Antiquatium is dedicated to the necropolis which houses, among several skeletons and small anmphoras containing the bones of children,  the tomb “of the newlyweds“, a man and a woman whose bodies have been buried embraced and whose cast still consecrates their love. This sight ususally softens the hearts of visitors.

The site has often been the object of desecration, not only by the so-called grave-robbers that go in search of antiquites to sell them to the black market, but also due to the works for the constrution of part of the highway that have led to the loss of many finds. The construction of the double track of the railway has brought to light the necropolis connected to the battle of Himera where more than thirteen thousand tombs have been found. The National Railway Company have financed the excavation campaign, allowing the discovery of what has been considered one of the largest necropolis discovered in recent years.