The historic villas of Messina are a little hidden and silent in their majesty. They are the testimony of many different lives, which have been a source of pride for the city. Recently, some of them have been opened to the public, and everyone has been surprised by the elegance, history, and amazing sea view. 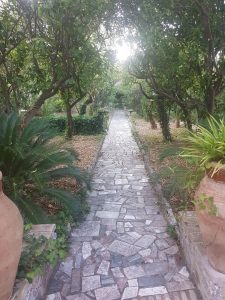 A “historical residence of a historical family”, as the website states, is Villa Cianciafara in Zafferia, in the south of the city center. It is a villa that tells anecdotes of lives jealously guarded and entrusted to the memory of the heir of the noble family, prof. Giuseppe Mallandrino. Son of Pasquale and Nicoletta Cianciafara, he is a perfect host, willing to open his house to visitors. The villa suffered damage in the disastrous earthquake of December 28, 1908, which demolished part of the city.

Professor Mallandrino tells how the terrible event was experienced by his grandfather, Filippo, whose mother lost his life due to the collapse. The moving story of its discovery, which only took place on January 4, is narrated in the book L’ultimo principe sotto il vulcano (The Last Prince Under the Volcano). Cianciafara is a family linked to other well-known names, for example to Count Philip’s cousin Tomasi di Lampedusa, his wedding best man, and author of The Leopard.

Another important name is that of the Filangieri, a family tied to the progenitor Angerio, a clever Norman soldier who arrived in Italy following the Norman king Robert Guiscard. His descendants were first called “Filii Angerii” and later known as Filangieri. The property, in addition to the manor, included a small private chapel, farmhouses and the old oil mill, where the photos, etchings and engravings made by Count Filippo along with the other pieces in the collection belonging to the family are preserved. 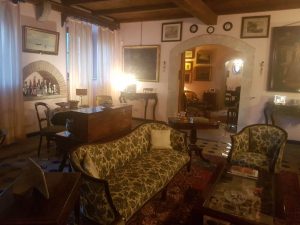 Visiting the manor, the value of a second and larger collection cannot go unnoticed: there are various family portraits that testify to both its historical and noble origins; there are the coats of arms of the Filangeri, the Tasca and the Cianciafara families. There are also works of art, such as the portraits of Ferdinand and Maria Carolina, sister of the most famous queen of France, Marie Antoniette of Austria, some engravings by Durer, a Madonna with Child by Antonello da Saliba, and a painting by Giovanni Tommaso Laureti, whose sketch is, instead, displayed at the Louvre.

The style of the wonderful furnishings is that of the 18th century Sicilian villas, with sofas and armchairs in Louis XVI style. On the upper floor, one can find the floral fireplace and chandeliers and, in the music room, a beautiful Austrian stove belonging to the grandmother from Bergamo. 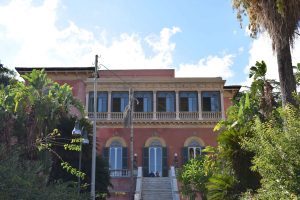 A few minutes away, on via Marco Polo, there is also villa De Pasquale in Liberty style, built by Eugenio De Pasquale, who founded his fortune on 15 hectares of cultivated lands with jasmine and orange blossom, which stretched from the villa to the sea. Today, very little remains of these lands, but the buildings are still preserved.

Villa De Pasquale is a refined example of the taste of its inhabitants. De Pasquale and his wife were fine collectors, one of the reasons why we find both marble sculptures outside and inside the house. 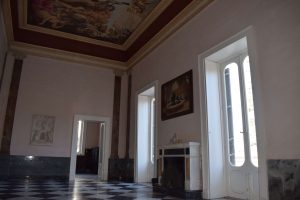 In addition to these, there are paintings, such as those in the boardroom and the music room, while on the upper floor there are books and a large table that housed the numismatic collection, in restoration at the superintendence of cultural heritage of Messina.

The last floor is the top one and has a grand ballroom. How could we not imagine, dreaming, the big parties, the music, wide-swinging skirts in the center of the room, the greetings among the guests, shining in their formal dresses. The room, damaged in the earthquake at the beginning of the century, was rebuilt in 1912, keeping the original ceiling decorated with panels depicting details of Titian’s “Sacred and Profane Love“.

Leaning out of the big window in the room, you can see glimpses of the Strait of Messina, that make you realize what kind of view the family and the guests could enjoy. From here, you can also see the small building, called the pantheon, where they used to dry the flowers and make delicate essences. 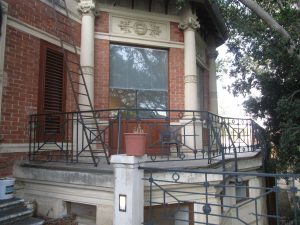 Villa De Pasquale was certainly not the only one overlooking the sea, because even the English Sandersons, at the end of the nineteenth century, enjoyed such a position. Located on the coast of Messina, in Via Conlare Pompea, Villa Sanderson-Bosurgi (from the name of the successive owners) offers a large garden that covers the entire property along the hill.

Once you are on the way up again, you can admire the other buildings until you reach the top, where a part of one of the villas has been preserved. Next to it, you can find a restored one, which nowadays is used as accommodation for Erasmus students.

The view from there is lovely. 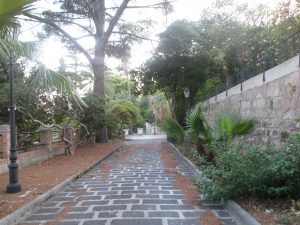 You can lose yourself by admiring the spectacular panorama right in front of you. Even though it is still the Strait of Messina, the unusual position makes us look at it with new eyes, revealing different details. From this perspective, we can admire the changing colours of the Calabrian Apennines, that the sunlight shapes at every hour of the day, whispering to the soul, always hungry for authentic beauty, that what it is looking for is there, that the amazement it needs is in front of your eyes.

Villa Sanderson-Bosurgi, as well as the Cianciafara and De Pasquale ones, offers these sensations and almost leads to look with envy to those who, at the turn of the nineteenth and twentieth centuries, could enjoy not only a breathtaking view, but also the magnificence and history that invade these beautiful places.