Island of Ortigia: Art, History and a Beautiful Sea

The Island of Ortigia is the oldest nucleus of Syracuse. Linked to the town by the Ponte Umbertino, Ortigia is surrounded by blue waters, where you can see sailboats, fishing boats, and other ships.

The aroma of saltiness and the shining sun on the sea waves beckon you to take a tour by boat where you’ll be able to see grottoes along the coast. Among these, there’s a heart-shaped cave which is a favored destination for romantic trips.

History reigns in Ortigia where, just before entering the real core of the island, the majestic ruins of the Temple of Apollo (6th century B. C.) rise with their columns in limestone. This is a reminder of the Greek past of Syracuse, a town that rises from the dust of time, leaving its evidence. Don’t forget that in the hinterland the Greek theatre of Syracuse still welcomes spectators with numerous performances inspired by ancient comedies and tragedies. 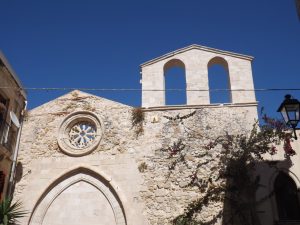 The magnificent Fountain of Artemis in piazza Archimede, which shines in its own light during the evening, leads to via della Maestranza, full of shops and perfect for shopaholics. Here you’ll find contemporary clothing shops next to artisans.

Walking up the alleys of this part of the town, you’ll reach the Giudecca, the ancient Jewish district. Go inside the church of Saint John the Baptist, built with the typical limestone. Its architectonical features recall something older. This roofless building set on arches, with a fifteenth-century portal with a rose window on top of it was built on a fourth-century A.D. basilica. Visiting this church is a great experience: you have the opportunity to admire the yellow and rose reflections of the light on the stone, with the blue sky above your head. An ancient synagogue most likely used to be situated next to the basilica.

Going on with the tour, you can immerse yourself in the narrow alleys colored by fuchsia and red bougainvilleas. Then you can visit the oldest Jewish ritual bath in Europe,  situated just under the residence-hotel “La Giudecca“. It’s the mikveh of Casa Bianca, accessible thanks to a long staircase carved in the rock. The aim of the brief guided visit is to let you know the fascinating history of the site while learning important information about the ancient Jewish culture.

Sicily is also famous for the so-called “pupi“, colorful puppets dressed as knights with brilliant armor. You can also decide to visit the museums dedicated to them and learn more about this southern Italian tradition carried on by the Vaccaro family. Inside the museum, you can see the studio where paperback cutouts are mixed with colored tubes and paintbrushes under the watchful eye of wizards, witches, and other fantasy creatures. 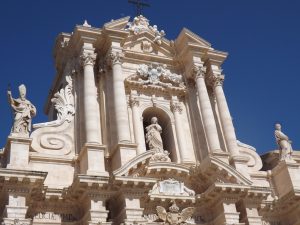 Turning to other historical alleys, you’ll arrive in piazza di Santa Lucia (Saint Lucy’s square) where the spectacular Cathedral (Duomo) rises in all its splendor with its magnificent Baroque façade. An attentive eye can catch some important details when entering the building: some giant columns support the roof, while rich Baroque fitments decorate the chapels. The Cathedral of Syracuse (Duomo di Santa Lucia), in fact, has an ancient story that once again is rooted in the island’s Greek past. The columns belong to the Temple of Athena (5th century B. C.). Christians incorporated them into Saint Lucy’s sanctuary, creating a case of historical, archaeological and devotional stratification.

Like sirens, the blue waters of the Syracusan sea need attention and it’s good to listen to their call, walking along the many alleys and eating cannoli or arancini. The Fountain of Arethusa, whose name comes from the nymph who took shelter in Syracuse, is just beautiful. Arethusa asked to be transformed into a fountain but Alpheus, who had fallen in love with her, chased the nymph until Zeus, moved by compassion, diverted Alpheus’ river to Syracuse.

The Castello Maniace overlooks the sea. It’s a masterpiece of military architecture ordered by the Holy Roman Emperor Federick II, also known as Stupor Mundi, between 1232 and 1240. Its high steeples in the rooms meet the strong defensive wall.

Finally, the Bellomo Palace Regional Gallery preserves and displays sculptures and artworks from destroyed convents of Syracuse and other places. It’s a little museum, divided into rooms situated both on the ground floor and the first one. From there, you can see the Palm Court courtyard whose walls are covered in coats of arms made of marble.

The tour of Ortigia doesn’t end here: its narrow alleys are full of details and stories of a distant past, aromas and colors, mixed with the traditions and smiles of the residents who will always have a place in the visitors’ hearts.