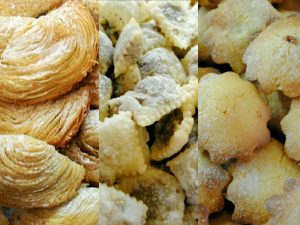 It’s not Christmas in Italy without the famous pandoro and panettone desserts, but in Abruzzo, the real stars of Christmas are the sfogliatelle, caggionetti and bocconotti. All three of them are filled with grape jam and coated with powdered sugar.

Sfogliatelle, although commonly associated with Naples, are a typical Christmas dessert in Abruzzo, particularly in the province of Teramo. The ancient history of the sfogliatelle from Abruzzo is linked to that of Naples. 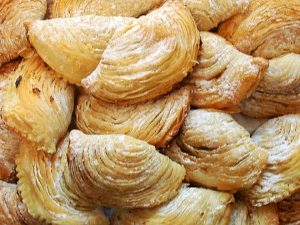 It was in the early 1900s when Donna Anna, Baron Tabassi’s wife, in the small hamlet of Lama dei Peligni, inherited the recipes of the Neapolitan pastries from her mother-in-law, who was originally from Campania.

Having different ingredients available than the traditional ricotta cheese – used as a filling in the Neapolitan version – and lard, Donna Anna changed the original recipe and used grape jam for the filling and lard between the pastry layers, making the dessert crumblier and softer. Walnuts and cooked must were also added to the grape jam for the filling.

The original recipe, which marked the birth of the current sfogliatelle from Abruzzo, was only revealed in the sixties by the Tabassi family cook. Nowadays, every woman from Abruzzo adds her own special ingredients such as cocoa, almonds, or vanilla to the customary grape jam. Some women even decide to completely change the filling, adding different flavors than the original ones such as lemon cream or Nutella. But what makes sfogliatelle perfect in every recipe is the final dusting of powdered sugar. 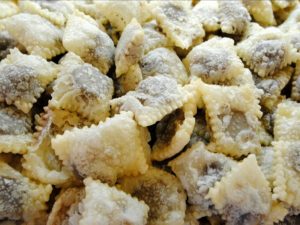 On any self-respecting Christmas tray, or uandir in dialect, sfogliatelle are also accompanied by caggionetti. Abruzzo’s Caciunitt, caggionetti or calcionetti, as they’re called, are a fried ravioli-shaped dessert with a delicious, soft filling. The filling is made of chestnuts, chocolate, and the traditional grape jam. They are an explosion of soft sweetness, contrasted by a thin crumbly texture on the outside. Obviously, caggionetti are even tastier if coated with powdered sugar. 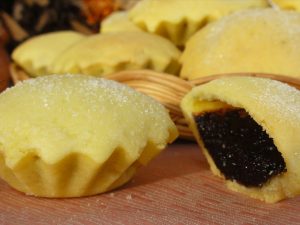 The third and last Christmas dessert typical of Abruzzo is bocconotti. Originally from the small town of Castel Frentano in the province of Chieti, its origins date back to the eighteenth century. Filled with grape jam, bocconotti are small, soft pastries sprinkled with powdered sugar. Their name literally means “bites”, because they’re so delicious and small that they can be eaten in just one bite.

It’s no wonder that during the holiday season every kitchen and every oven in Abruzzo is filled with the scents of these three delicious pastries. They’re totally worth a try on your next visit to Abruzzo!

Post Views: 3,347
A. Falasca
Courmayeur at the Foot of Italy’s Monte Bianco
Christmas Markets in Italy in 2021: the “Tyrolese Village” of Arezzo