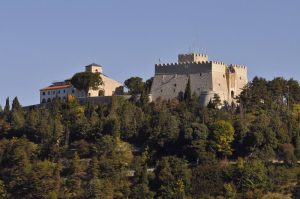 Walking along the narrow streets of the old town center, along the picturesque salita dei monti (“climb of the mountains”), you’ll reach the highest point of the city of Campobasso. On this rocky hill, 790 meters above sea level, you will find the Monforte Castle.

The staircase on the left of the entrance leads to the highest part of the castle, from which you can admire the surrounding landscape: the valleys of the Biferno, Trigno and Fortore rivers, the majestic mountain range of Majella and the mountains of Molise. On sunny days, when the air is clear, you can also see the waters of the Adriatic Sea. The rectangular tower, which stands at 808 meters above sea level, houses one of the highest weather stations in Italy.

A national monument and symbol of the city, the castle takes its name from Count Nicola II Monforte, who restored it in 1458 after an earthquake. During this time, the fortress reached its peak: the whole city was surrounded by walls, interspersed with six gates. The six towers on the Campobasso coat of arms refer to these six gates, which are now a part of the old town center of the city. 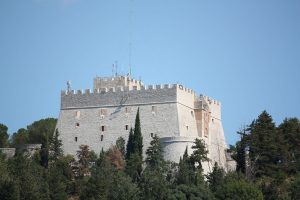 The origin of the castle is still shrouded in mystery. A parchment dating back to 1375 represents the first mention of its existence, but according to some scholars, it is a Norman building, erected where a Lombard wooden tower previously stood.

Whatever its origin, the castle is still a massive quadrilateral with circular turrets, Guelph battlements and a large rectangular tower. The windows are few and small, suitable for its use as a military outpost. On the portal of the castle, you can admire the coat of arms of the Monforte family: a cross with four roses. The main entrance was originally turned towards the city, while today the only practicable entrance is the one on the square, where the Church of Our Lady is also facing. In the basement of the castle, there are prisons, used until 1573. The inside of the castle, now without a ceiling, has a large courtyard, where the traces of the stairs leading up to the upper floors are still visible. 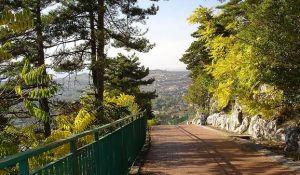 Park of Via Matris

During summer, the inner courtyard hosts events and exhibitions organized by the city. In August, you can see the historical re-enactment of the court: Cola of Monforte, his bride Altabella of Sangro, drummers, guards and swordsmen.

Nature lovers will also appreciate the park of Via Matris, a naturalistic trail that surrounds the Castle, stretching along the hillside.

Post Views: 3,104
Redattore
Taormina: One of the Most Beautiful Cities in Sicily
A Single Day Itinerary in Reggio Emilia