The region of Puglia or the Anglicized version, Apulia, is, unfortunately, no longer a secret. I say unfortunately because it is a region so pure, so simple, and so exquisitely beautiful that it would have been nice to keep it hidden from the rest of the world, even from the rest of Italy. It is the region that makes up the heel of Italy’s famous boot shape, but I can assure you, it is anything but. An area most known for its beaches that rival, if not surpass, any tropical island. Yet there are other villages that are not coastal that warrant your attention; one of these is Locorotondo. 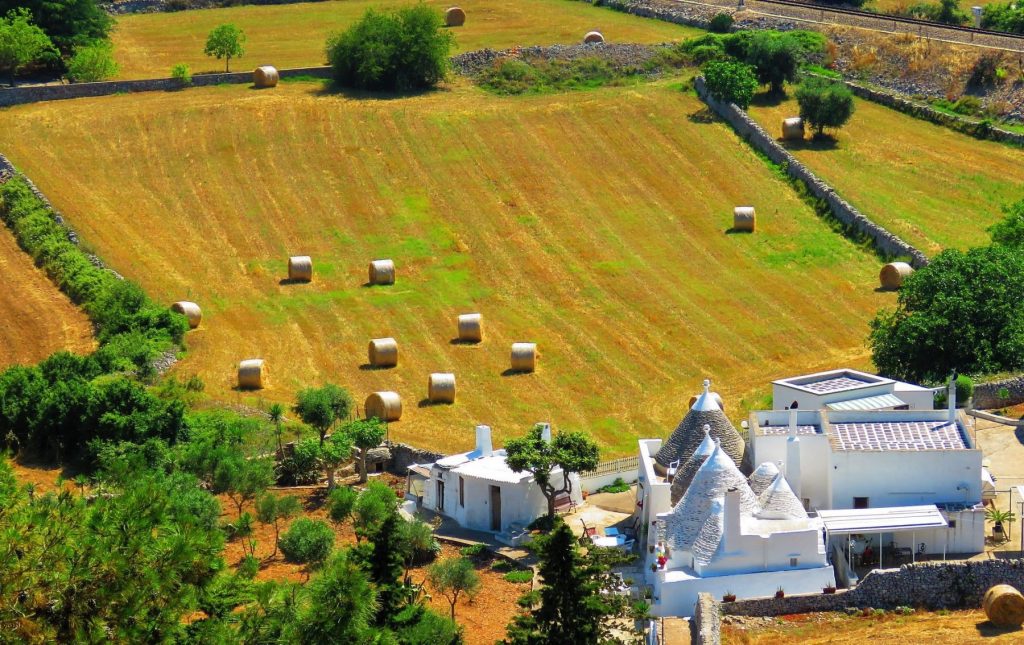 Locorotondo hasn’t gained as much popularity as nearby Alberobello or the area further south known as Salento partly because it is inland. Keep in mind that “inland” means it is still only a 25-minute drive to the sparkling waters of the Adriatic Sea.

If your Italian is rusty, rotondo means “round” and Locorotondo is just that- a round place. If you have never visited Puglia, it resembles Greece or even Morocco more than it resembles the rest of Italy with its vibrant whitewashed houses and churches and monuments built in the local limestone. At high noon in the summertime, the piazzas can almost be blinding. Blindingly beautiful, that is.

One theory, although not widely accepted, is that Greek soldiers who had fought in the Trojan War were shipwrecked off the coast and ended up settling here. Either way, there is no doubt that people have been farming this land for thousands of years.

The crops of the Itria Valley (Valle d’Itria) include durum wheat, wheat, grapes, fruits (especially cherries, figs, and stone fruit) and vegetables, legumes, nuts, and of course, olives. This area still prides itself in its agriculture and the outskirts of Locorotondo is actually still divided into distinct contrade or sections which are like mini-neighborhoods. Each with a school, a church, a common well, even a post office. The famous trulli houses are grouped together around a jazzile or a common square (known as a piazza in the rest of Italy). Some of the contrade go back hundreds of years and still bear the name of the noble families or saints. 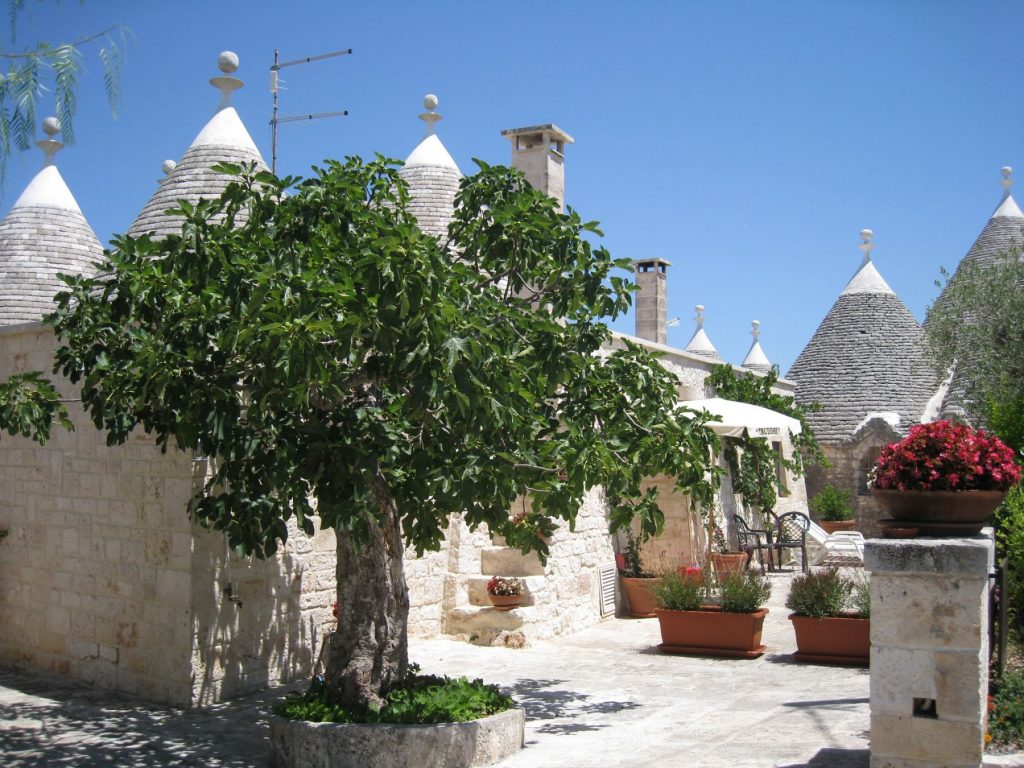 Sometime in the 1500s the oldest trullo of the entire Itria Valley was constructed and it is still standing today in the contrada of Marziolla. Contrada Marziolla is just one of the numerous itineraries that you will want to experience outside of the historic center. If you’re lucky, you might encounter a group of locals engaging in a hypnotic concert and dance of the traditional pizzica. It’s similar to the Neopolitan tarantella and originated to cure the evils of a spider bite (the tarantula), yet more frenetic and at a much faster pace.

The historic center is magical and you’ll find yourself taking pictures constantly as you meander through the streets admiring each and every characteristic balcony. If it seems to you as if the residents were in competition with each other as to who can display the most beautiful flowers, you would be correct. Every year, the town holds a competition for the most beautiful balcony. It’s clear as to why this town has earned itself the prestigious titles of one of the Most Beautiful Villages in Italy and the Italian Touring Club’s Orange Flag Award.

Like all Italian cities, there are numerous churches here to visit. First and foremost, the Chiesa Madre, or the Cathedral which dates to 1790 (“new” by Italian standards). The Church of St. Nicholas (San Nicola) with its stunning frescos is older and its facade much simpler dating to 1660. Don’t miss the Church of Madonna della Greca with its characteristic cummerse roof  (pitched) so typical of Locorotondo and reminiscent of northern Europe. 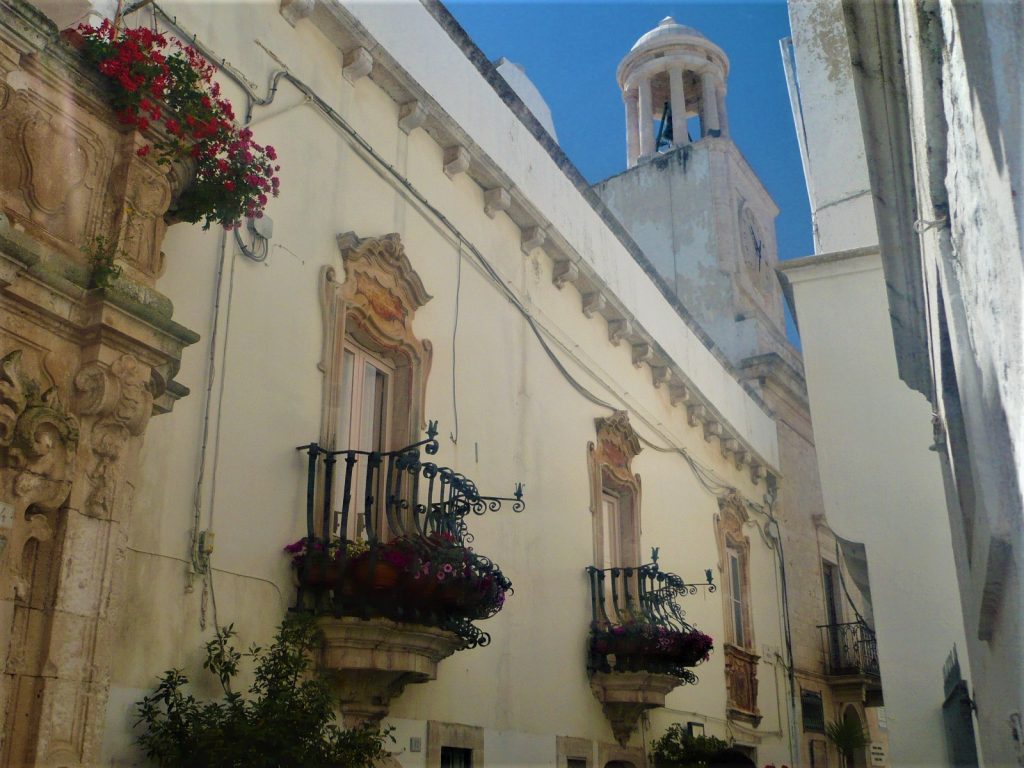 The locals’ pride in their town, in their traditions, in their agriculture, and in their food is pleasantly obvious to the visitor. It shows in all they do.

The signature dish of the entire region is, of course, the homemade orecchiette pasta that takes its name from the shape of the ear. Being somewhat inland and rural, Locorotondo’s staples include hearty vegetable dishes using wild greens as well as legumes such as favas. Lamb and even horse meat are widely prepared here. Sweets include the use of local figs, honey, and almonds. White wines are widely produced and Locorotondo DOC is one of the most well-known.

Holy Roman Emperor Frederick II supposedly said that if the Lord had known about Puglia, he would never have sent his people to the Promise Land of Palestine. You’ll just have to visit to see whether or not you agree.