The Medieval Borough of Casertavecchia

For tourists, Caserta is the Italian Versailles, the town of Van Wittel’s Royal Palace that was built between XVIII and XIX century. Actually, the origins of Caserta are much older. Its name derives from the Latin name Casa Hirta that refers to the position of the old borough built on a hill. During the Saracen invasion and the devastations of lowland towns, the clergymen and the inhabitants of surrounding areas, mostly those who came from Calatia, found a safe shelter in Casertavecchia. 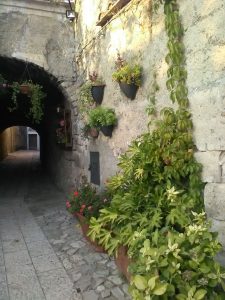 The population of Calatia notably increased during XII century, with the construction of the present cathedral, which is dedicated to St. Michael Archangel.
Nowadays the cathedral, the bell tower and the ancient medieval borough are important tourist destinations. There are many folk events in Casertavecchia and its surroundings: Casola, Pozzovetere e Sommana.
It takes me 15 minutes to get from my house in Pozzovetere to Casertavecchia. As soon as I come to a crossroads, I can see St.Rocco’s Chapel on the left. The building – dating back to XVII century – has only one, lateral portico and an eight-meter bell tower. The chapel is very simple- Spartan. It is open to the public and to worshippers on 16th August, St. Rocco’s day. On the right, there is a big lawn with grazing ponies. 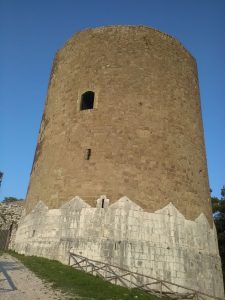 To reach the medieval borough I descend a steep road lined by pines until I come to the fortress.  Built in 879, during the Swabian and the Norman domination it became a proper castle. The Normans ordered the rebuilding of the fortress and the building of a great circular mastio. Maybe it was ordered by Riccardo, Tommaso di Lauro’s son, who was educated at Federico of Swabia’s court. He married Federico’s daughter in 1246. The tower was built with square tufa blocks that lay on a limestone hoof. It is one of the biggest in Europe, and its diameter is second only to Aigues Mortes tower, in Provence. It is about 30 meters tall and 19 meters in diameter.
After getting through the mastio, I can lean out from an observation deck to admire the landscape. From there, I can admire the Royal Palace, Mount Vesuvius, the sea and even Ischia when the weather is good. But the breathtaking landscape that can be admired from many parts of the borough is not the only attraction of Casertavecchia.

Walking through the narrow alleys I photograph every flowery corner and I begin to smell the distinct aroma of meat roasting on an open flame. I have a look at a menu that serves many wild boar recipes. On the left, there is a souvenir shop and a cafè displaying delicious traditional cakes in its windows. I can finally see the bell tower of the cathedral! I hurry to reach the cathedral. Every time I enter this church I remember my art teacher telling us about the so-called “columns of bare”: marble columns whose capitals – that are mostly Corinthians – are different from each other and come from old Roman buildings. According to the legend, fairies transported the heavy columns along the hill. The cathedral was built with grey tufa from Campania. The facade, on the west side, mirrors the three interior aisles. Zoomorphic sculptures stick out from the walls. The bell tower was completed in 1234 by Bishop Andrew, during Frederick II’s reign. It is 32 meters tall and it is similar to the Aversa bell tower. The ogival arch, which is intersected by a road that leads to the castle, is clearly gothic. The first and second floor have double arched windows. The bell tower cell is octagonal.
In front of the cathedral is the old Minimi monastery. The two rooms have been obtained from the ancient monks’ canteen and the barn of the monastery, and they can accommodate up to 240 people.

Leaving Vescovado Square, I come to the most famous house in Casertavecchia, the House of Bifore. This XI century noble residence was built by Ursula Panniz, a German tourist that fell in love with the borough and moved her handicraft shop here. Ursula invented the famous spiritelli. They are pots with wooden tops that were decorated with funny faces. According to the tradition, if one writes his own wish on a sheet of paper and puts it into the pot, the little spirit or leprechaun makes the wish come true. According to another tradition, one should think about one’s wish and insert a coin in a hole on the ground floor in front of the double-arched window. If it lights up, the wish will supposedly come true. Ursula died in 2014, but she wanted the spiritelli to become the symbol of Casertavecchia and to be made by all the craftsmen of the borough. The story of her escape from post-war Germany became a book.

When my visit to the borough comes to an end, I walk towards the woods and, reading a poster, I discover a new aspect of this town: it is a step of the Micaelic Way of Mount Tifata. The Italian Alpine Club (area of Caserta)  created the so-called Tifatinvita: an annual two-day excursion from Maddaloni to Sant’Angelo in Formis, passing through Casertavecchia. This suggestive itinerary between history and nature is steeped in St. Michael’s worship. St Michael, indeed, is the patron of Maddaloni and on its hill- called Mount St. Michael- there is a sanctuary that is dedicated to the archangel. Also, Casertavecchia Cathedral and Sant’Angelo in Formis Benedectine Abbey are dedicated to St. Michael. Tifatinvita is a train-trekking itinerary. The route starts from Maddaloni (but could also start from the opposite side). The participants visit Maddaloni, St. Michael’s sanctuary (427 meters) and the Carafas’ Castle, from which they can admire the plain of Campania and Naples. 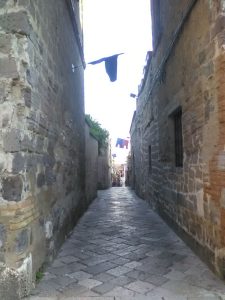 When they reach Casertavecchia (496 meters) they visit the ancient borough and finally they eat and sleep there. The following day they leave from St. Rocco’s Chapel and reach Mount Virgo, which is the highest portion of the journey (620 meters). Walking towards S. Leucio, (200 meters) they see the Royal Site and then Vaccheria (191 meters). The following stage is Mount Tifata (630 meters) from which the participants can admire the Volturno valley. Finally, they visit Sant’Angelo in Formis Benedictin Basilica and the former Alifana station, where the route ends. If they want, they can walk for an hour to Santa Maria Capua Vetere. The journey from Maddaloni to Casertavecchia is 10 km. The segment from Casertavecchia to Sant’Angelo is about 16 Km.
Many events are organized throughout the year in the nearby borgos of Casola, Sommana and Pozzovetere. For example: the ASD WILD WEST Regional Championship and the asparagus festival during the first week of May.

Article and photos by: Anna Visconti