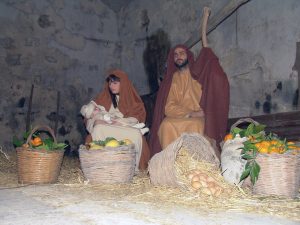 A Nativity play is an important representation of the Holy Bible lived with a devout religious sentiment in all the Catholic countries of the world. In Italy, a greater religious fervour for Christmas traditions can be found in the southern regions, particularly in Sicily, where for centuries the ancient tradition of the Nativity play has been handed down from generation to generation.

In addition to its religious and representative value, Ispica’s Nativity play is also an opportunity to rediscover the ancient professions that have now disappeared. It’s a way to honour this heritage for future generations.

Christmas is also the time of year when families prepare local, traditional dishes, and visit places of religious sacredness – often located in natural areas of indescribable beauty – where Nativity scenes are represented.

Ispica, a small town of 15,000 residents in the province of Ragusa in the extreme south-east of Sicily, offers tourists a rare opportunity to go back in time, discover historical sites, taste the unique flavors of the local cuisine, and experience deeply religious traditions. 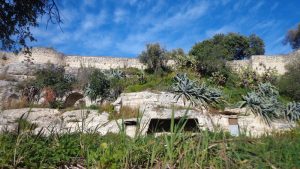 Defined as the most beautiful and visited Nativity scene of Sicily, Ispica’s Nativity play has drawn over 70,000 people in its last three editions. It’s located in the charming Cava d’Ispica, a natural canyon where a large river once flowed. It is one of the most important landscapes in Sicily from a natural and historical point of view.

The setting for the Nativity play is the real natural caves of soft limestone rock which house prehistoric necropolises, Christian catacombs, rupestrian oratories, monastic hermitages and dwellings of various types. They were continuously constructed from the Ancient Bronze Age until at least the fourteenth century. The name of this area is  “Parco Forza” and is located in the lower part of the valley, near the city. In a setting worthy of a movie production, the representation of the Nativity, the shepherds’ adoration and the Three Kings’ arrival come back to life through the local farmers and shepherds, who’ve devoted their lives to pastoral farming and to the production of hot ricotta cheese. All the ancient trades are represented here: the baker, the welder, the cooper, the carpenter, the carter, the farrier, the rope maker, the tailor, the embroiderer, the harvester, the broom maker, the potters and the stonemason.

Ispica’s Nativity play is not only a tourist attraction at Christmastime, but it’s also a way to honour Sicily’s ancient – but still very much celebrated – bucolic and pastoral tradition.

This year, in its 21st edition, the Nativity play can be seen on December 23, 25, 26, 30 and January 1 and 6, from 4.30 pm to 8.30 pm in Ispica’s old town centre (formerly called Spaccaforno) near the Cava. It can be reached by a shuttle bus that departs from the modern town centre, located on top of a hill where the city was rebuilt after the violent earthquake of 1693.

Ispica’s Nativity play is a charming, once-in-a-lifetime experience and visitors will be enchanted by the local landscape that bears a striking resemblance to Palestine.

If you love interesting, unforgettable experiences, traditional cuisine, and ancient traditions, you must visit Ispica! You’ll always be a welcome guest!

Article by: A. Gianna