Open Cellars on St. Martin’s Day is but an autumn revisitation of a more important and famous event: Open Cellars or Cantine Aperte that is celebrated in May all over Italy. In November, we chose the Sannitica Cellars, but in May we move to the area of Irpinia in the Avellino province of Campania just 50 km east of Naples. 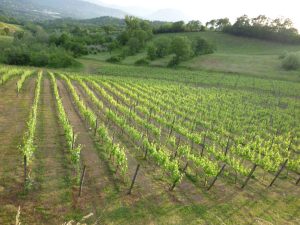 In Campania there are more varieties of wine grapes than in France. Vineyards in Campania have great possibilities. The name Irpinia comes from hirpus which meant wolf in Oscan (an extinct Indo-European language). In Irpinia the art of wine dates back to the age of the Greek invasion. For this reason, Francesco De Santis decided to establish a school of oenology and viticulture in Avellino. In Campania there are four kinds of wine that have been awarded with DOCG (guaranteed and controlled appellation of origin); three of them are produced in Irpinia: Greco di Tufo, Fiano di Avellino and Taurasi. We will certainly have the opportunity to taste them during our guided tour through the area of Atripalda. Roses are planted in vineyards because they are like a canary in a coalmine; the roses will serve as a warning in case of illness, infestation or lack of minerals. If these wonderful flowers, indeed, are attacked by mildew or red spiders, they alert winemakers, and prevent the infestation of the vineyards.

I’d love to spend more time admiring the beautiful landscape from the observation deck, but our guide is waiting for us in the cellar. Actually, the guide is one of the managers of the winery and he begins talking numbers and about trade with China. Then he shows us many rooms that are used for producing wine and he carefully explains the process of champagne making. Finally, he leads us to the tasting room. The cellar offers three different kinds of wine, served with ham, cheese and breadsticks. The first one is Greco di Tufo. It is light with scents of white peach, apple and wisteria. It is fresh and savoury and tastes like almonds. The second one is Dubl, a dry champagne made with the Falanghina grape. After a one year fermentation in bottles – as our guide told us during the tour – this champagne is extremely pleasant and dynamic. My favourite wine is the third one! It is Ros’aura, a fresh and intense cerasuolo rosé made from Aglianico grapes, that tastes like strawberry and raspberry. 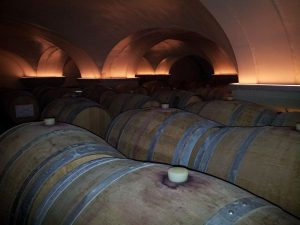 When our tasting ends, we decide to dine in Montefredane, 10 km from Atripalda at a biological firm that produces: hazelnuts, marmalade (apples, strawberries and onions) and wine, obviously. The hilly soil and the mild weather allow the estate to produce Fiano of Avellino DOCG and Aglianico Irpinia DOC. The first one is a yellow wine with a flowery bouquet that tastes like apricot, pear, hawthorn berry and toasted hazelnuts. The second one is a ruby red wine with scents of cocoa, tobacco and fruit. The Aglianico grapes are also used to produce Taurasi, which is the first Southern wine that was awarded with DOCG (guaranteed and controlled appellation of origin). Taurasi is a great ageing wine: at least 3 years. Having dinner at the estate we can appreciate: onion marmalade, barley bread and Fiano wine.

Wine therapy was developed in France in the Bordeaux area by winemakers that decided to combine the benefits of grapes and thermal baths. The first wine therapy applications were simple baths or compresses with wine, must and grape marc, but it was difficult to have those treatments after September. Nowadays, thanks to modern cosmetology, one can exploit the benefits of wine therapy throughout the year. It combats free radicals, restores elasticity to skin, purifies and tones the body. Red grape leaves are a natural remedy for fragile capillaries; they favour microcirculation and protect veins and arteries. Wine therapy sessions can last about two hours and can include: a whirlpool, nebulized shower with colour therapy, Turkish bath with grape marc scrub, wine therapy tub (filled with hot water, wine and must) and sipping herbal tea in a relaxing ambience. 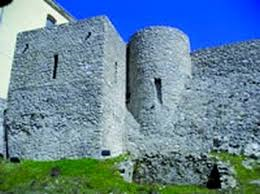 If you are in Montefredane, I suggest visiting the castle that sits at 600m atop a hill in a dominant position over the Sabato valley. The fortress and the borough – dating back to the XI century – became a possession of Francesco Marino Caracciolo, prince of Avellino, in 1650. After numerous reconstructions in XVII and XVIII centuries, they were abandoned in XIX century. Nowadays we can still admire the perimeter walls and a cylindric tower.

For more information on the Cantine Aperte event in May, visit: Wine Tourism Movement