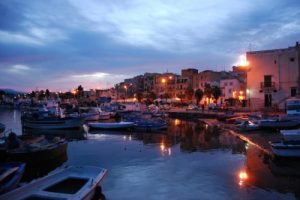 When I read this quote I realized that I’ve had a similar thought several times in my life. Living on the Sicilian coast, the sea is almost taken for granted. It’s there, you know it. But when you move away for study or work (and in Sicily, this happens often), you realize how much its presence is not so trivial, and what a positive effect it has on your physical and psychological health and on your life in general!

Surely, those who live in cities far away from the sea are justified, and most likely, live very well without it. They probably assume that the sea has no purpose other than to sunbathe or swim. It’s a legitimate assumption by someone who has not experienced life on the coast.

The sea is always beautiful, in any season, and in all weather conditions. Have you ever had an appointment and been too early? A visit to the sea helps you pass the time. When you’re alone, the sea and a good book are the best company you could ask for. 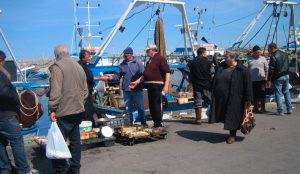 The sea is constantly changing- from season to season, from day to day. In winter, the sea can be mysterious. One day it can be so calm that it almost convinces you it’s not real with its stillness and silence. The next day, however, the wind can blow hard and the sea rages so much that you tremble with fear at the very thought of being caught in the middle of it. I do not know why, but in both cases, the sea transmits serenity to me. It is hypnotic, like the flame of the fireplace. It unleashes the frustrations and anxieties that you might not be able to. I think that’s why in Sicily, despite everything, people are very sociable and relaxed.

In Sicily, it is not unusual to have beautiful days even in winter, but everything changes with spring. The difference is palpable. The days get longer, people get out more, and in search of what? Gelato of course! A casual stroll along the promenade is part of the culture here. The temperature allows you to peel off that winter clothing without freezing, breathe in the intoxicating smell of salty air, and relax to the sound of water lapping against the pebbles of the shoreline. 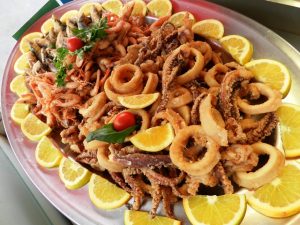 In towns like Porticello, you’ll see little restaurants* and taverns with tables outside and people dining in the sun. Fishing boats will be arriving with the fresh catch of the day, still moving, with eager chefs and locals alike ready to choose their special of the day for their menu.

Not everyone loves the sea, some prefer the mountains, others do not know how to swim or fear spending too much time in the sun, but they can still appreciate it. The sea belongs to everyone and is for everyone. The sea has many properties: it is a source of energy, it strengthens the body, it makes the islanders nostalgic when they are away, and looking at it, even if from afar, is good for the spirit. In Canada, seawater is prescribed and sold under the name of “Ocean Plasma” because it is scientifically proven to help treat symptoms of certain diseases. Just think what a few weekends a year, or a holiday in Sicily can do.