Continuing the journey of the beautiful coast of Abruzzo, we could not miss the appeal of two of the most characteristic spots in the area: the Abbey of San Giovanni in Venere and the village of Rocca San Giovanni.

The abbey stands majestically on a promontory in the town of Fossacesia, in the province of Chieti. To say that it is beautiful is too simplistic. Seeing it in the daytime, an overwhelming feeling of power overcomes you. In the dim light of the sunset, it evokes mystery as it’s illuminated by the discrete lights that surround it, dampening its apparent roughness. 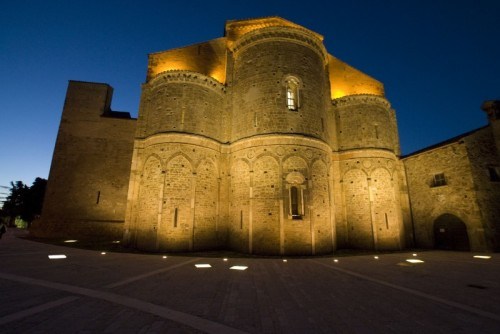 Composed of a basilica and a monastery, both built at the beginning of the thirteenth century, its name is derived from the cult of the goddess Venus. A very important figure, she was responsible for the care and conservation of the family. But later, in the battle against pagan cults, the temple was demolished and in its place was born a small church with an adjoining dwelling for the monks.

The year one thousand marked, according to an ancient belief, the end of the world and so the population spared no expense in its generous offerings that allowed for the expansion of the abbey complex. It has undergone numerous restorations over the years and today, it can be admired in all its splendor. The façade with its portal all in white marble (the portal of the moon) recounts the events of St. John the Baptist. 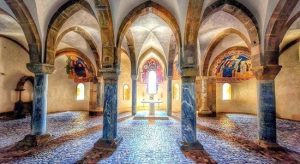 The elaborate exterior gives way to the essential simplicity of the interior, boldly Romanesque, and is divided into three naves that in turn, enclose twelve pillars and arches. The presbytery raised above the floor of the room helps to make the space even more majestic.

Then there’s the crypt characterized by five wonderful frescoes, with Christ protagonist in five different scenes of life.

Closely linked to the Abbey, the village of Rocca San Giovanni’s origins can be traced to Oderisio I, the abbot of the monastic complex. They had a common destiny outlined by difficult moments that saw the emergence of fires, earthquakes, raids by Turkish pirates, not to mention the warlike events such as the bloody battle of the Sangro river from which they were liberated in December 1943 by Canadian troops. 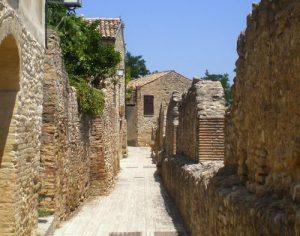 Despite all this, it has maintained a rich historical and architectural heritage and for this reason, is certified as one of the “Most Beautiful Villages of Italy”.

The most important symbols of both civilian and Christian power are in the splendid Piazza degli Eroi. The church of St. Matthew the Apostle with the adjacent bell tower and the municipal palace, of classical inspiration, dates back to the nineteenth century. The latter also has a collection of artwork (sculptures, paintings and engravings) and is designed in such a way as to overcome in height the nearby church, highlighting its superiority.

Remains of its medieval roots are evident in the massive city walls and the well-preserved Torrione dei Filippini, that defended the town and abbey in case of siege.

Getting lost in the alleys of this enchanting village is like taking a walk through history and tradition; a walk that can lead to the sea. 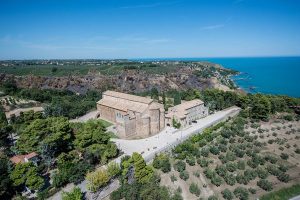 Yes, because the backdrop here is the crystal clear Adriatic. This stretch of coast is much loved and frequented by tourists as well as the locals who are lucky enough to benefit from it all year round.

Its depths are, among other things, embellished by a statue called the Christ of the Abyss by the Italian sculptor and engraver Vito Pancella. The bronze sculpture, commissioned by local divers and sunk in August 1994, is 80 centimeters high and weighs 15 kilograms. Located at a depth of over six meters, it’s positioned on a reinforced concrete base. Only last year, after 23 years, it was brought to the surface for maintenance and cleaning but was quickly returned to the sea of which it is now an integral part.

If you associate days at the sea with beautiful evenings filled with good food and excellent wine, then this area is an ideal destination for you. Rocca San Giovanni is actually called the “city of wine“. It boasts two impressive cellars, producers of the Montepulciano and Trebbiano d’Abruzzo DOC wines.