The Ancient Roman City of Altilia di Sepino in Molise

Altilia di Sepino in the Campobasso province was an important Roman city dating back to 290 BC. Located within the valley of the Tammaro river at the foot of the Matese mountains. Thanks to its location, it became a thriving town and a municipal seat after the social war (91-88 BC). 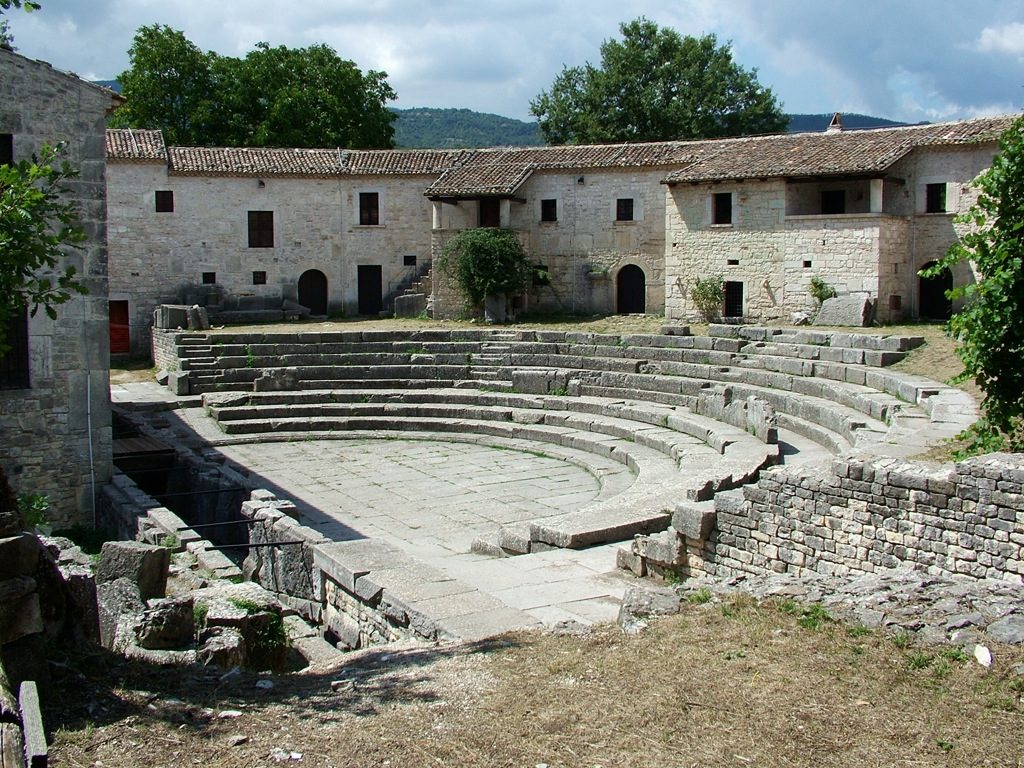 According to Roman expansion policy, the foundation of new cities were always built in important and strategic places and provided for a close relationship between the city and the countryside. The newly founded cities were inserted in the heart of this territory and assimilated its rigorous distribution creating a succession of regular blocks by repeating, in a quadrangular form, the arrangement of the castrum: the Roman military camp.

Roman cities were surrounded by walls, interrupted by openings in correspondence with the two main road axes that led to the surrounding countryside. The forum usually opened up at the intersection of the cardo and the decumanus. Then there were the theater, the amphitheater and the spas that repeated, even in distant provinces, the common language of Roman architecture.

In the walls that delimit it, built between 2 B.C. and 4 A.D. in opus reticulatum, four monumental doors open, conceived as triumphal arches with a single arch, placed at the ends of the cardo and the decumanus and a small door that allowed access to the theater directly from the outside. 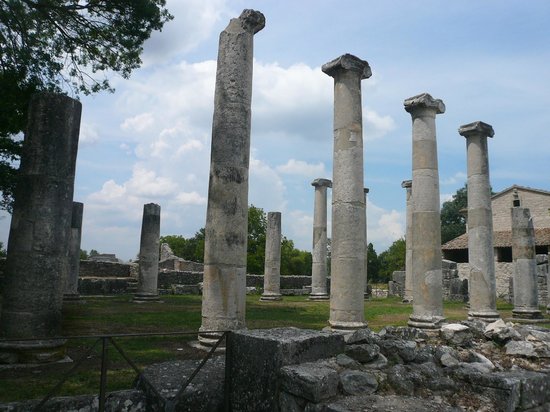 The two perpendicular roads connected the four gates: via Praetoria (east to west) and the decumanus; and via Principalis (north to south) and the cardo. The four gates take their name respectively from the places of origin of the paths and therefore we find the gates of Bojano and Benevento and on the mountain-river path, the Terravecchia door and the Tammaro door.

The general scheme, which is repeated in all the doors, takes up the theme of the Roman honorary arch: a single arch flanked by two towers. A clearly legible feature in Porta Bojano which features two barbarian statues on the arch frames and a relief on the keystone of the arch depicting a male bust. 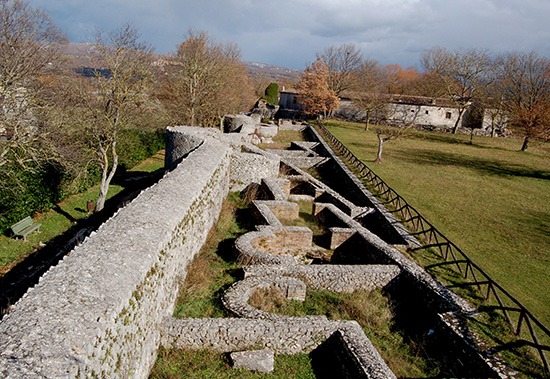 Among the most fascinating buildings, is the theater, dating back to the first century AD, located close to the walls. It still shows the two monumental tetrapile entrances, the prospect of the scenic building, the ima cavea and the media cavea. These structures were used as a foundation for rural houses built long after by the farmers who repopulated the place.

Along the decumanus are the shops, private homes, a cult building from the Augustan age, the macellum with a corridor leading to the central hexagonal courtyard on which the shops open, and the basilica, mainly intended for judicial functions, which with its columns with Ionic capitals defines the intersection between the cardo and the decumanus where the facade with the main entrance faces.

Opposite the basilica is the forum on which the main public buildings of the city overlook, such as temples and a spa complex.

Outside the walls, you find the necropolis and funerary monuments of the Augustan age belonging to Publius Numisius Ligus and Caius Ennius Marsus, characters who held important positions in municipal life.

Saepinum reached its peak in the early imperial years, but in the 4th century AD decay began. The demographic and political collapse, aggravated by the Gothic-Byzantine war (535-553 AD) and natural disasters provoked the progressive abandonment of the territory by the population.

More to see in the area: The WWF Oasis Guardiaregia-Campochiaro

Article and photos by A. Raucci

Post Views: 260
Redattore
San Giovanni in Marignano: One of the Most Beautiful Villages in Italy
Photography Exhibition in Turin: Masterpieces from the Bertero Collection