Milan, city of international fame, the capital of fashion and shopping and so much more. In fact, the Lombard capital and its surroundings can be explored from different perspectives: historical, architectural, artistic, and religious. So for all of you travelers and tourists, the choice is really up to you. Today, we’re exploring the cycling route of the Strada delle Abbazie!

I propose a tour that will allow you to gradually move away from the chaos of the city by spending a quiet morning or a carefree afternoon in its immediate vicinity. It is a new and alternative project, launched on 1 September 2013 by the Tourism Department of Milan and from the Pastoral Tourism and Pilgrimages Service of the Archdiocese of Milan and the Strada delle Abbazie (“Abbey Road”).

This cycle-tourism route (also accessible by car) is a fantastic way to get to know the outskirts of Milan, both for tourists and for Milanesi themselves! 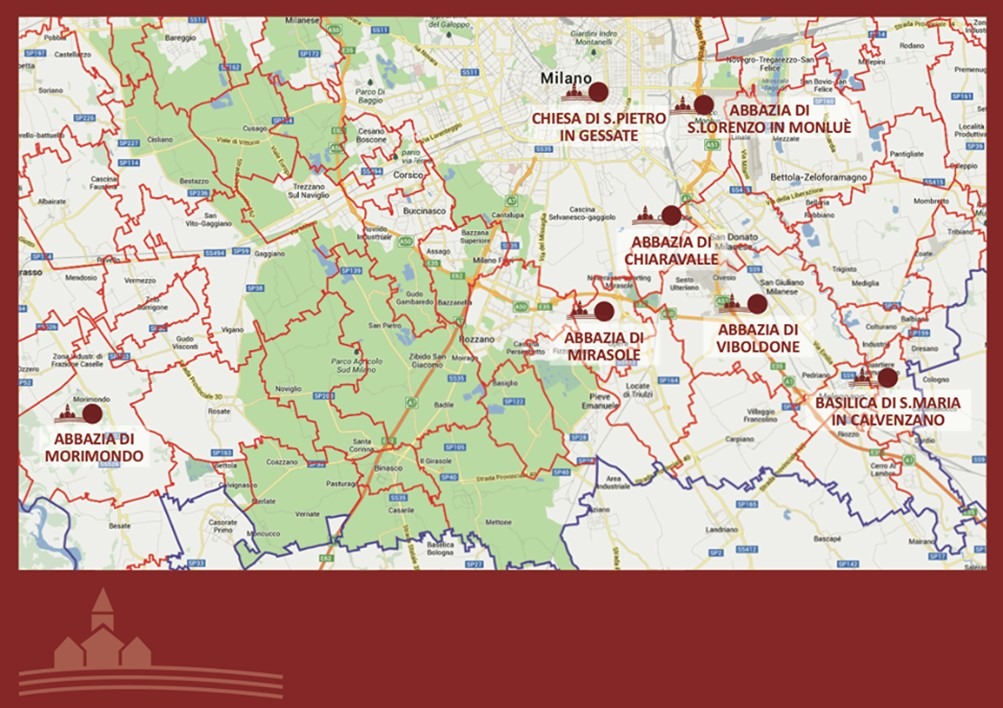 Seven, red brick masterpieces dot the landscape and date back to the Middle Ages and later. They were constructed and are still maintained by various monastic. The countryside is characterized by canals and paddy fields, fountains, but also mills, country roads and large farmsteads.

The sites of interest are in fact part of a predominantly rural path, which twists and turns in the southern area of the province of Milan. It initially skirts the Navigli Canals and then proceeds inside the Ticino Park and the Southern Agricultural Park (Parco Agricolo Sud), whose 46,300 hectares have been reclaimed since 1990 by monks. “A hundred monks, in a hundred kilometers” could definitely be the slogan for this campaign.

The itinerary starts just a few steps from the old town center of Milan from the Church of San Pietro in Gessate. This church is a century project by Guiniforte or Pierantonio Solari, updated over the years, but originally dating back to the 15th century. It contains precious testimonies of Lombard paintings of the time, among which, worthy of note, are the frescoes of  the stories of Saint Ambrogio located inside the Grifi Chapel and made by Bernardino Butinone and Bernardo.

From this first stage onwards, the route offers different options. The cycle-tourism path comprises several directions that can be divided into stages, up to a maximum length of 25 km. If you are visiting the capital, but you want to spend a few hours exploring the countryside, the best solution is to continue for three more stages.

The first is to proceed towards the ancient area of Mons luparium (on the eastern outskirts of the city) where, inside the grangia, a typical tiny rural village, the Church of San Lorenzo in Monluè stands. The building was erected in 1267 by the religious order of the Humiliates of Santa Maria di Brera. Here, if you stop at lunchtime, you can taste the typical cuisine of Milan at Antica Osteria Monluè, an elegant vintage-style farmhouse. 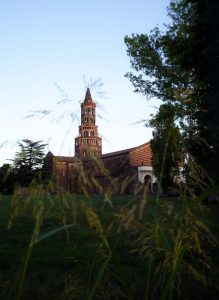 The Abbey of Chiaravalle, located inside Parco Agricolo Sud, between the districts of Vigentino and Rogoredo, is the second stop. It was founded during the decade following the 1150, by Bernard de Fontaine (also known as Bernardo da Chiaravalle, French monk, abbot and theologist who belonged to the Cistercian order).

The essential structure in terracotta, shaped like a Latin cross, was at first a prayer center and then it became a farm. The subsequent alterations, including the construction of the majestic bell tower of Pecorari and the 17th-century portico, accompany Bernardino Luini’s paintings (La Madonna della Buonanotte) and the Fiammenghini artists’ ones in the church transept, and in the east side, the murals representing Milan in the past, attributed to Bramante.

In addition to its artistic value, Chiaravalle offers a wide range of products made by the monks themselves and for sale at the Bottega dei Monaci. Aloe vera, honey, jams, sweets, sauces, crostini, and aromatic herbs are all delightful. 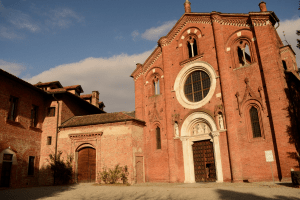 We’ll end with a jewel in the hamlet of San Giuliano Milanese, the Abbey of Viboldone. Completed in 1348 by the religious order of the Humiliati, laic monks dedicated to prayer and work, today it is inhabited by a community of Benedictine nuns devoted to the restoration of ancient codes and books. The church, consecrated to Saint Peter, is the only original building. Its interior is surprising: it is covered by precious frescos of Giotto’s influence and it is considered one the most interesting in northern Italy of the fourteenth century.

The actual tour does not end here! Three other abbeys including the Basilica of Santa Maria in Calvenzano, the Abbey of Mirasole, and the Abbey of Morimondo offer an excellent opportunity to visit for those of you who want to move further away from the city and into the countryside.

Post Views: 2,108
S. Zanini
What to See in Alba in Italy’s Piedmont Region
Sanremo: Luxury on the Italian Riviera