For many people, the mountains in wintertime only mean skiing and snow. Many renounce going to mountain destinations convinced that if they don’t ski, there won’t be anything else to do. In this article, one of our writers will take us on a journey along the trails of the Adamello Regional Park in Lombardy. 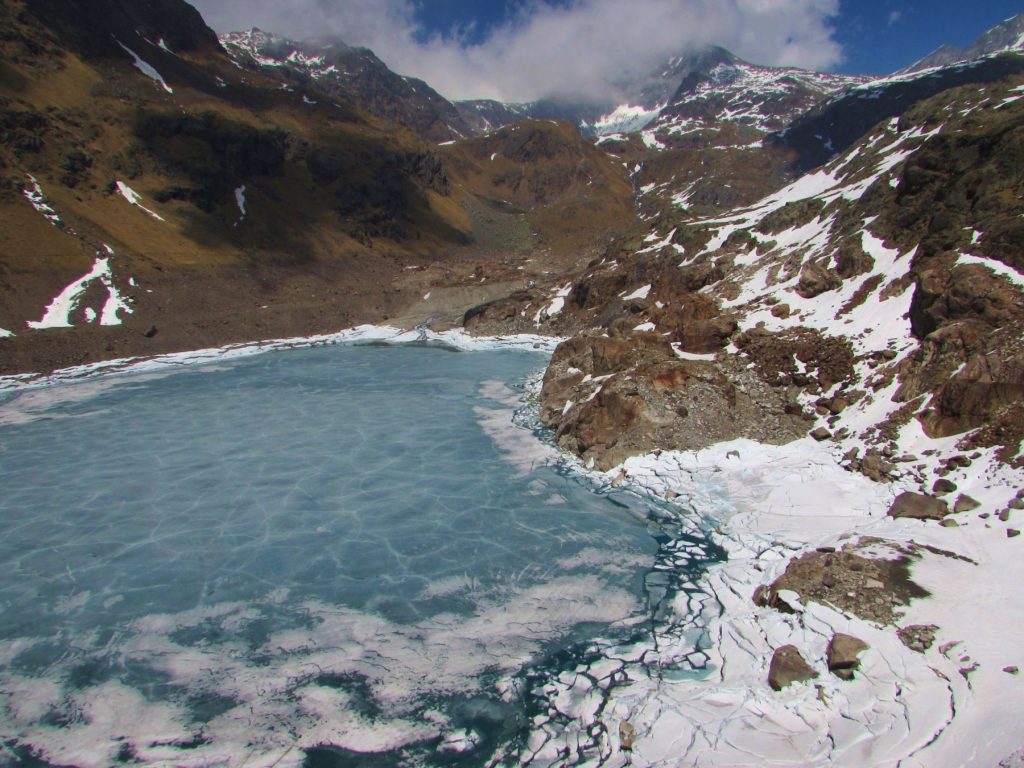 Just because temperatures drop and become frigid, that is no reason to give up mountain excursions all together. Many peaks take on a whole new look during the autumn and winter seasons that you would otherwise not experience in the spring or summer.

By arming yourself with excellent boots (or snowshoes) and patience you’ll see new landscapes and terrain. Some of the lakes will be frozen and can be appreciated in their dormant state.

The trail pictured in these photos is a very nice hike located just before the town of Edolo, at the end of Valcamonica. There are four mountain refuges and three lakes in a six-hour hike.

The classic itinerary starts from Malga Premassone to Lake Baitone with the refuge of the same name. Along the four and a half hour route, you’ll come to the Baitone and Tonolini refuges which overlook the small Rotondo Lake. The starting point is located at Ponte del Guat which can be reached quite easily. Following the only possible road to Valcamonica, (which starts approximately at Sulzano, touching Pisogne, Darfo, Bienno …) you’ll reach Malonno and a small sign for Zazza and Sonico.

After crossing an intersection with another road, you’ll follow a beautiful road (by car) through a green, mossy forest with very narrow, blind curves. In twenty minutes you will be at Ponte del Guat (elevation 1,540 m.) where you can park. Otherwise, you can reach the Malga Premassone car park (for a fee on a slightly unpaved road). 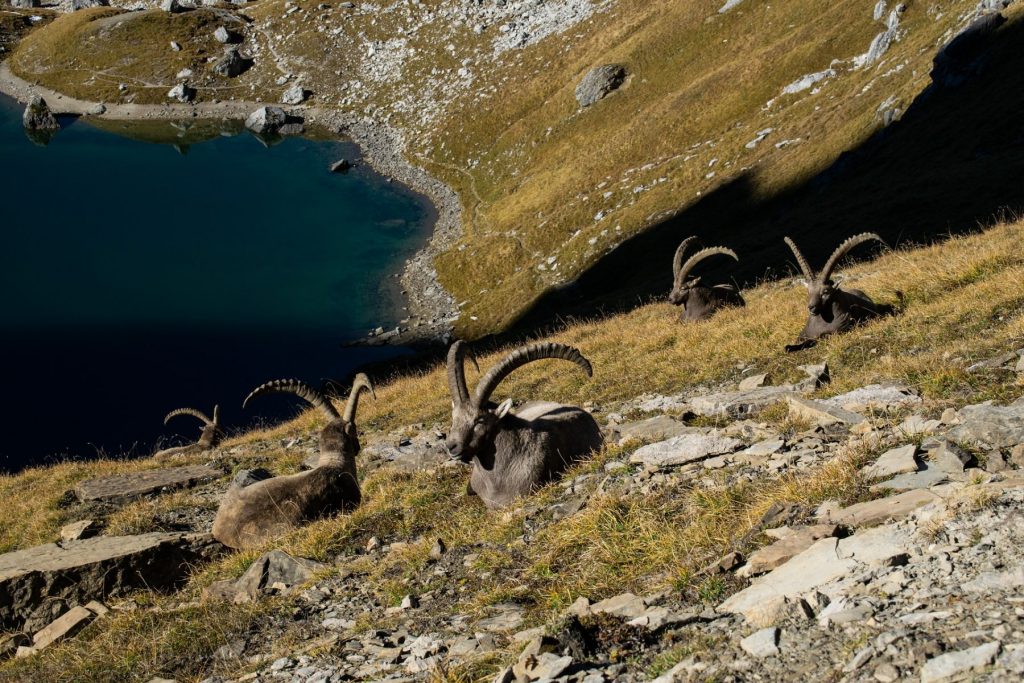 The refuge is very suitable for families with children or for a relaxing weekend, being in a large clearing crossed by a crystal clear stream and with a view of the Baitone. Once past Malga, there is a fork in the road almost immediately. Continuing to the right, you’ll face the “Miller Stairs” – a very steep rocky path – which leads into a beautiful valley often covered with snow until the end of May and to the Gnutti Refuge, a lovely chalet overlooking Lake Miller.

From here, you can go back to the hut or follow the Passo del Gatto, which leads to the Baitone refuge and offers a beautiful view of the valley below. Warning: it’s not suitable for those who suffer from vertigo given the very narrow and exposed path. Instead, taking the detour to your left, you will follow the most direct route to the Baitone and Tonolini, or a path half through the woods and half outdoors, with a wide view of the Gnutti refuge plateau and the surrounding peaks.

In truth, the first part is not that exciting, but a little monotonous. Most of the hikes in the Adamello Park only have one flaw- very long climbs and very long descents, with no middle ground. Whereas in the Dolomites, you’ll encounter lots of ups and downs in the demanding climbs that are interspersed with high-altitude plateaus. In any case, your effort will definitely be rewarded. After about an hour and forty-minute walk along an easy path, you’ll reach the imposing dam of the Baitone refuge. During the winter and with snow covering the path, the climb is longer and more demanding, especially without snowshoes, but it does not have dangerous or exposed sections such as the Passo del Gatto.

Once you reach the slopes of the dam, you can cross over to the opposite side and enjoy a magnificent view of the lake. In the summer, the water is crystal clear and almost turquoise. From here, you can already see the Tonolini refuge and its nearby waterfalls. You may even be able to spot numerous ibexes that climb the dam tens of meters high to recover the salt from the bricks and their cracks. Considering the wall is practically vertical, it is impressive. In winter when the lake is frozen the thick layer of ice takes on a beautiful blue color with white veins. Although the water level has fallen a bit lately, the view of Lake Baitone is always remarkable and it is worth stopping for lunch near its high banks.

From here you can choose from two routes to reach the Tonolini refuge. The first one, near the Baitone refuge (yellow with red shutters), is about half a kilometer shorter but less panoramic, while the second path is to the left of the dam. The latter, although a few minutes longer, is the most interesting. It runs along the western part of the lake, allowing you to enjoy a wide and wonderful view of the back of the dam, the lake, Plem Peak, and the horn of the lake.

The path is short and, after about twenty minutes on flatland, you’ll reach the last ascent of the day. From here you can admire three, twin waterfalls that disappear underground presumably to feed the lake. After as many minutes of ascent, you’ll finally arrive at the Tonolini refuge (2,450 meters). The refuge is made of stone and wood and its small round lake is appropriately named Lago Rotondo. On clear summer days, the reflection of the surrounding peaks in this body of water is beautiful. The refuge is small but very welcoming, and you can rest on the edge of the lake on one of the smooth, stone slabs. 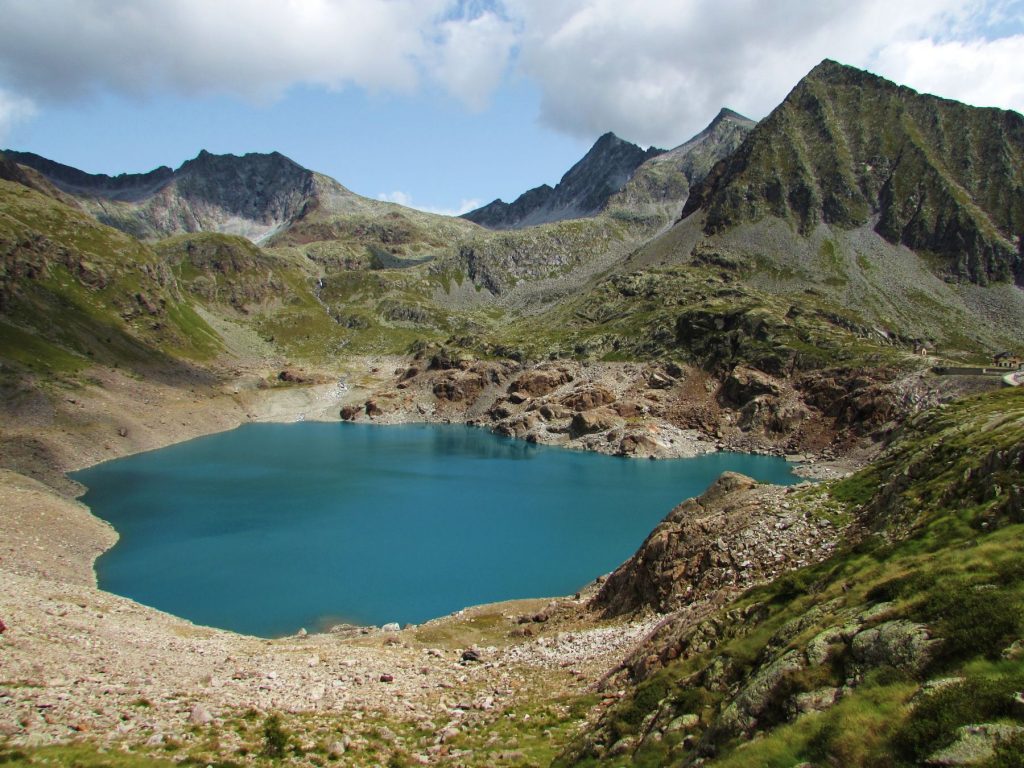 Those wishing to extend their excursion (by a lot), can follow path number 50 toward Gelati Lakes. These small lakes are practically always frozen. The climb is about an hour and forty-five minutes, but the rocky landscape and the numerous lakes are worth the effort. Otherwise, you can return via the Tonolini refuge towards the Baitone refuge and Ponte del Guat. You may want to choose the opposite route from your ascent for a change of scenery.

Summing up, the combinations and possible routes to the different refuges and lakes in the Baitone group are varied and suitable for anyone who loves the outdoors. Above all, it will be well worth the effort.

Post Views: 392
Redattore
Why You Should Visit Specchia in Italy’s Salento Region
Where to Stay in Trentino: the Agritur Pisani Agriturismo in Brez