Ponza Island: Off the Coast of Rome

The island of Ponza and its archipelago is a fabulous day trip from Rome. The Pontine Islands archipelago has some of the most beautiful beaches and waters in the entire region. Here are some helpful tips for your visit.

What to See in Ponza

Ponza is the largest of this group of islands. This small archipelago includes the islands of Gavi, Zannone, Palmarola, Ventotene and Santo Stefano. It is located in the Gulf of Gaeta (in the Tyrrhenian Sea), but it is perfectly connected to the “mainland” by frequent ferries coming from many cities. 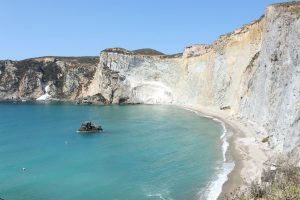 Let’s start our tour with Chiaia di Luna, one of the sandy beaches on the island of Ponza. The shape and color recall that of a crescent moon on a clear summer night, hence its name. This beach is the most spectacular and renowned of the whole archipelago, as well as being the largest. The sheer, vertical cliffs that plunge directly into the sea are striking. They are at the same time a source of inconvenience, since unfortunately this beach has been closed due to rock slides. In fact, Chiaia di Luna can only be reached by sea, and respecting a distance of 200 m from the coast is mandated by law. The sea is a beautiful, intense turquoise- crystalline and transparent. The sea bottom is sandy and perfect for long swims. 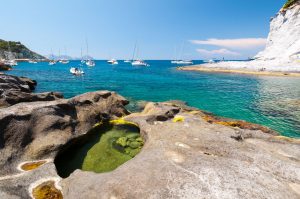 This cove has a shallow and sandy bottom. Therefore it is the most suitable for families especially with children. In the summer, unfortunately, it is very crowded. If possible, it’s preferable to visit in the low season when you’ll enjoy serenity and absolute peace. It is also suitable for young people, with its bar, beach equipment rental, and music. Cala Feola can be reached by land via a path, which ends with a flight of 265 steps. Despite the length of the staircase, the beach is easily accessible and is not difficult for children, even for the little ones. In front of the cove there is a little port with small boats. There is also a kiosk where you can have lunch. 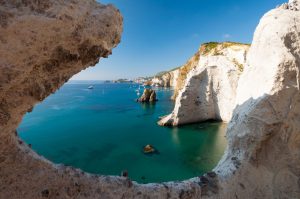 On this magical island, there is a place where Mother Nature has truly outdone herself: the “fontone”. This area, which is named for the presence of small, natural pools resembling a spring, was used by fishermen to repair their boats. In high season, the pools are unfortunately very crowded, but thanks to the local bathing establishment, you can rent canoes and paddle boats and venture out to the middle of the sea. The “fontone” is composed of two swimming pools: one is more protected among the rocks and suitable for rough seas and the other that feeds into the sea and boasts crystalline water. The pools can be reached by land. Wear comfortable shoes suitable for climbing about 300 stone steps.

This beach is named because of the huge, white tuff wall that resembles a Greek temple. Its beauty is well known, so expect a crowd in warmer months. It’s partly composed of sand and shallow waters- suitable for children– and partly by a long cliff. The beach here is equipped with umbrella and chaise lounge rental. The only flaw of this spectacular beach is the “early” sunset: due to the cliff that surrounds it, sunset comes as early as 5:30 pm. Don’t despair! This beach is very well equipped and well known for its happy hour and nightlife, thanks to the frequent taxi boats coming and going from the port of Ponza and the bay of S. Maria. 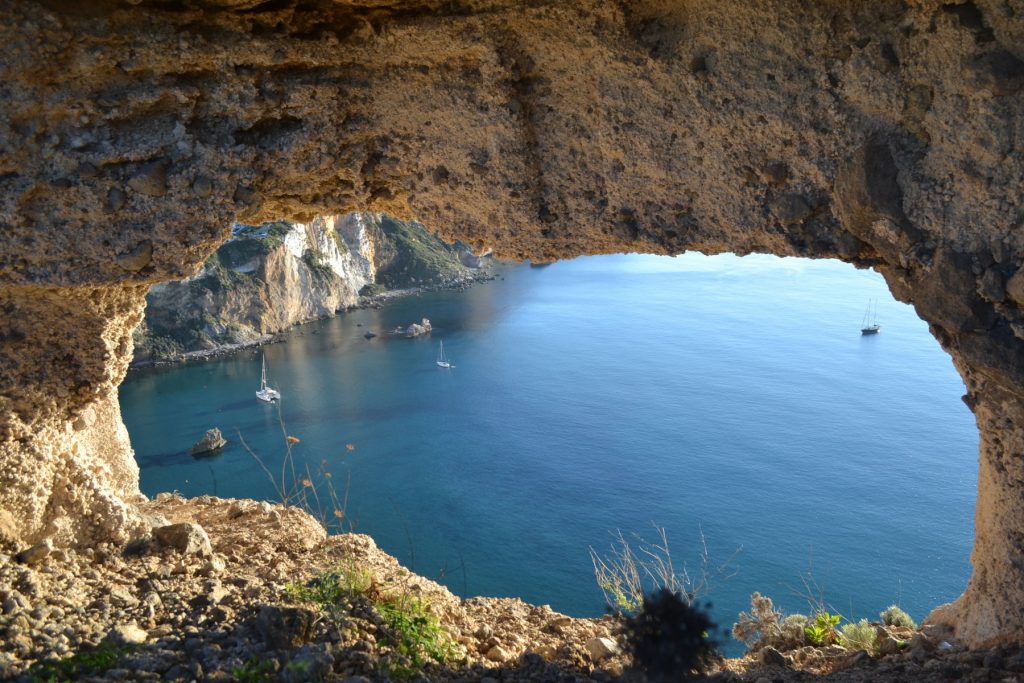 If the reasons listed above still haven’t convinced you to visit Ponza, just wait and see what the rest of the Pontine Islands have in store!