There is a peak, the highest of the Mergozzolo group, that rises between Lake Orta and Lake Maggiore. Popularly known as the “Mountain of two lakes” but since the 1880s, it’s better known as Mottarone. This mountainous massif is located in Italy’s northern region of Piedmont. 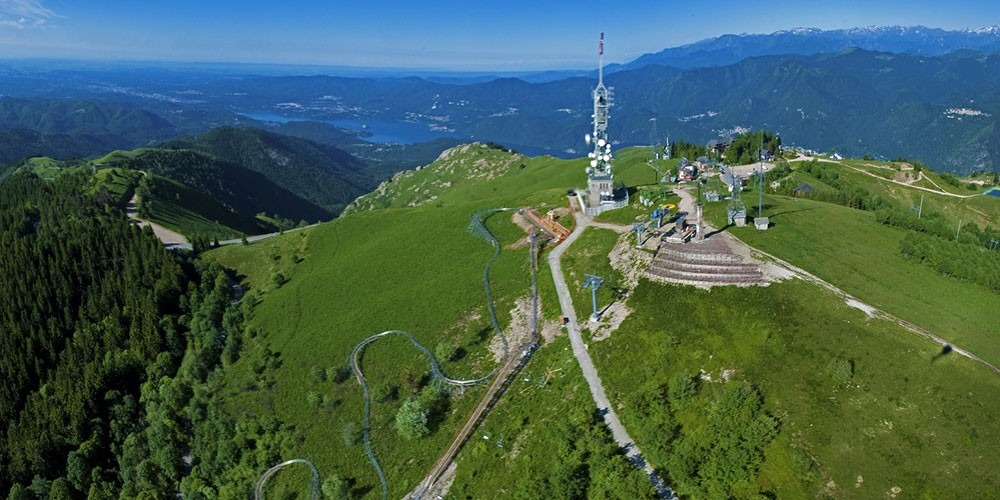 A trip to the mountains can satisfy a variety of interests, depending on your personal aptitudes and on the season you’ll choose to experience it.

For trekking enthusiasts, there are lots of historical trails with amazing landscapes that cross through woods of firs, pines, larches, beeches, chestnuts, as well as ancient alpine pastures.

This is the ideal destination for a spring excursion with spectacular views and a pitstop in one of the restaurants or chalets located at the top. In winter, Mottarone is a popular ski resort boasting numerous equipped ski slopes. From a geological point of view, the territory is fascinating since there are white and pink granite quarries scattered throughout. 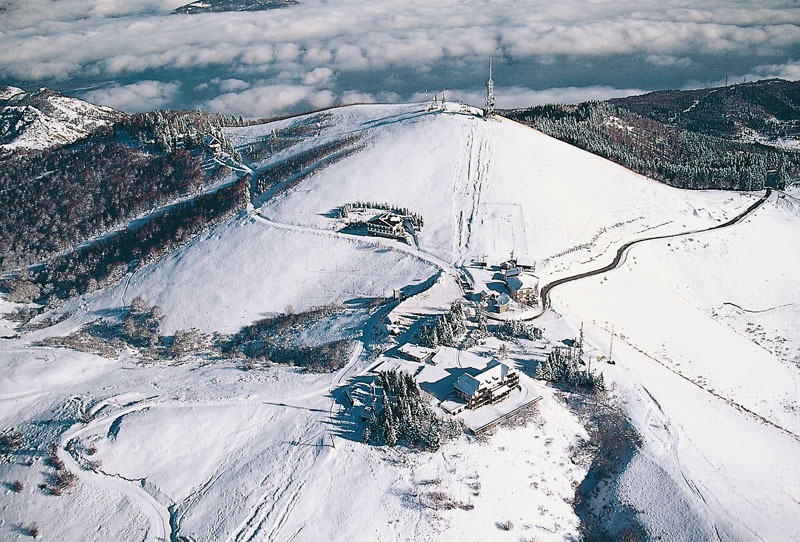 The number one reason why I recommend you visit Mottarone is the fantastic view. Its location has deemed it a popular destination since 1800. The breathtaking view offers a 360-degree view of the surrounding area. You’ll be able to see the peaks of the Alps, the mountain top of Monte Rosa, the mountains of the not far Valle Ossola, the soft hills up to the plain and the scenery surrounding the seven lakes with the mountains reflection in their waters (Orta, Maggiore with the islands, Mergozzo, Biandronno, Varese, and Monate and Comabbio). See if you can spot each one and identify it!

The Stresa-Alpino-Mottarone cableway is one of the main attractions here. It starts on the banks of Lake Maggiore, right in front of Isola Bella, from Piazzale Lido in Carciano, a hamlet of Stresa.

The cable initially soars over a short stretch of the lake and the Borromeo Islands, and in just ten minutes reaches the intermediary station of Alpino, at 805 meters above sea level.

If you decide to consider this option, stop at Alpinia Botanic Garden, an observation deck with over a thousand local plant species. The second section, in another ten minutes, crosses a wide lush valley up to Mottarone. From this point, the convenient Panoramic Chairlift Mottarone Vetta will allow you to reach the cross at 1,491 meters above sea level. Alternatively, the highest station can be reached by car and the highest point is connected to the car parks by a short uphill route. 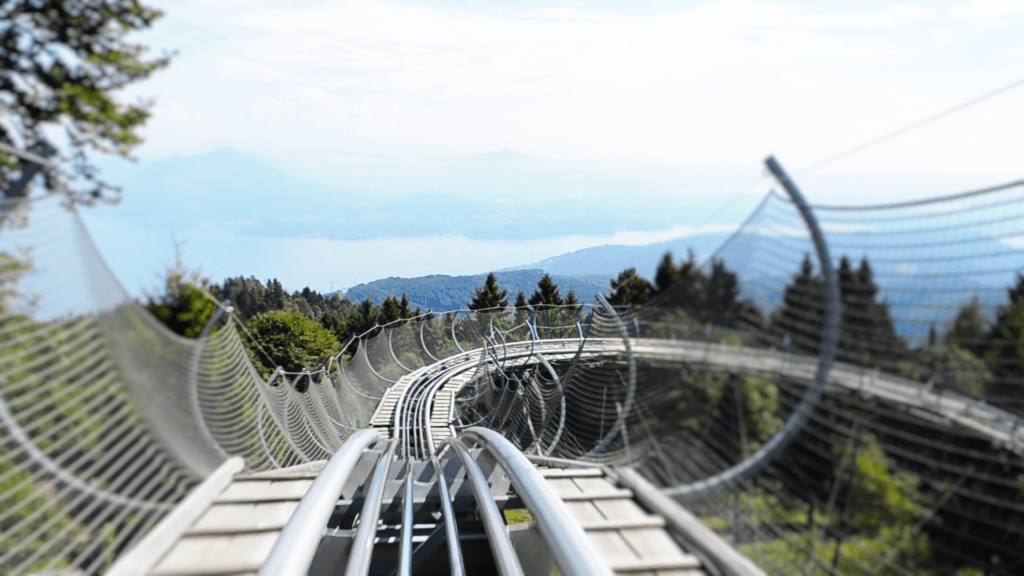 For the youngest and most adventurous, but also for everyone else, there is a surprise at the top: Alpyland. An Alpine Coaster, actually more of a bob racetrack on rails, with a 1,200 meter-long and 100-meter high bobsleigh track similar to rollercoasters. Each bob carries a single passenger or a couple that manages the speed independently, thanks to a rear seat braking system. The track is open all year round, however, in winter, it is only accessible during the weekends and Christmas holidays. (Check the official website for schedules and rates).

There are several alternative routes from which you can choose to reach the location. First of all, the mountain is accessible by cable car, as previously mentioned. Another option is to arrive on foot, hiking up the Stresa-Mottarone path which starts at the lakefront of Stresa and proceeds, initially, on paved roads up to Someraro e Levo and then becomes a trail which develops through the woods, to the Mottarone meadows.

For those who don’t particularly like walking, Mottarone can also be reached by car or bike via two alternative roads: the first, “Two Coasts Road”, which begins in Armeno, or the private tollroad “Borromea” that starts from Stresa-Gignese.