St. Agatha in Catania, Sicily: the Best Festival Ever

Perhaps the people of Catania are exaggerating a bit when they say this is the “second biggest religious festival in the world”. Well, maybe we are not quite at a planetary level, but the feast of St. Agatha (video here) is a show that goes on for almost three full days. St. Agatha was a Christian martyr who actually lived in Catania at the foot of Mt. Etna in the 3rd century AD. In a small town, a procession brings everything to a standstill, but nowhere else in Europe can it bring a city of almost 500,000 people to a screeching halt for 72 hours!

Although the real party is from February 3rd until the morning of the 6th, the city of Catania has thoroughly planned many events beginning on February 1st through 12th. On Friday, February 1st, the traditional concert of the Teatro Massimo Bellini and the parade displaying 150 dresses will be organized by the Academy of Fine Arts in Piazza Duomo; Saturday, the 2nd is Candelora evening with various events scheduled in Piazza Duomo and throughout the city like “white night“of museums and commerce. There will also be numerous social events especially geared for women such as femicide, and other various solidarity events. 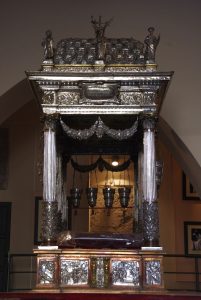 All of Catania seems to crowd into Piazza del Duomo (Cathedral square) on the evening of February 3rd when the feast begins with I fochi d’a sira or tri (or “the fireworks of the 3rd£ in dialect). The sky explodes with fiery, beautiful colors. On the afternoon of February 4th, the first procession starts: the heavy silver cart that holds Agatha’s reliquary bust is carried in the procession along the outskirts of Catania’s historical center. The route ends late at night, and you’ll barely have time to rest because the real festival begins the next day. On February 5th the procession follows the inner route along Via Etnea, Via A.Di Sangiuliano and Via Crociferi until finally winding back to the Duomo (sometimes not until the following morning!). The procession walks very slowly, among the dense crowd, and arrives first in Piazza Cavour for the “fires of the Borgo”. Then it ascends along Via Di Sangiuliano (which once took place at dinner time, but over the years has become progressively later), and stops to listen to the Song of the Nuns of Via Crociferi that once took place at dawn’s first light (now it’s at 10 in the morning). 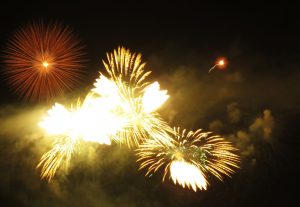 Nowadays St. Agatha’s return to the church almost always takes place the morning of the 6th, and sometimes as late as after lunch. Doing the entire procession on foot is impossible, so we suggest you reserve a room in one of the many hotels or B & Bs located along Via Etnea, Via Di Sangiuliano, Piazza Duomo or Via Vittorio Emanuele (the inner route). Remember that Via Etnea is a very long (3 km) street and that the procession only covers the first part of it.  Make sure that your B & B is located near the Piazza Duomo-Piazza Cavour part. The same goes for Via Di Sangiuliano (make sure that your accommodations are before or on Via Crociferi) and Via Vittorio Emanuele (better to stay near the Piazza Duomo).