The Beaches of Trapani 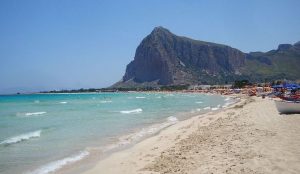 The beaches along the coast of Trapani are among the most beautiful on earth. Our journey begins from Ligny Tower where a series of tiny beaches can be found along the rocky coast. This area can be packed with tourists in the summer months. We continue along the coast toward the old tuna trap Tipa. The gorgeous San Giuliano beach begins here. The water is crystal clear and visitors can rent umbrellas and lounges or choose to set up their own umbrella in the allotted areas. San Giuliano ends at the next tuna trap San Cusumano (still in use producing canned tuna). 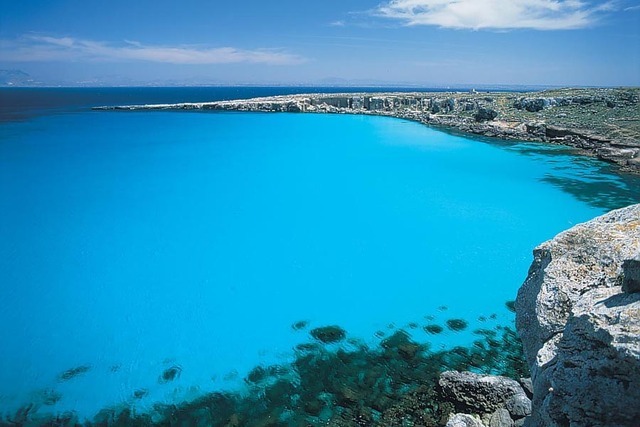 The Egadi Islands are just off the coast of Trapani. The largest is Favignana, called “the butterfly on the sea”. The name derives from Favonio, meaning a hot wind. It has 30 km of rare coastal beauty and boasts both sand and rocky shores. In the middle of the island lies Santa Caterina Mountain (314 mt) and its castle. There are also beautiful tuff caves which were once mined for construction use.

Levanzo Island is the smallest containing a few houses, but basically no paved roads. One of the most important archaeological sites in all of Italy is found here along the coast- The Genovese Grotto. Its cave paintings date back to the paleolithic era. The island furthest from Trapani is Marettimo which is reachable by boat. 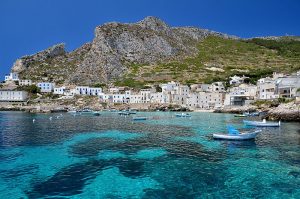 Continuing back up the coast of Trapani, we arrive in Pizzolungo. There are beach houses and a little town that sprung up to cater to the growing number of tourists in the 1950s. Next comes Bonagia which is famous for its fish and seafood cuisine. Its tuna trap has been actively catching tuna since 1266 and is something to see in and of itself. It houses a tower and a museum devoted to marine business and activity.

Moving along the coast, we come to Lido Valderice and Rio Forgia. The latter is still a relatively undiscovered gem of a beach. Cornino Bay is another area that is rapidly growing in popularity for its spectacular beach and Mount Cofano Nature Reserve. Its located in Custonaci county which is famous for its marble quarries and caves. The crystal clear blue waters and limestome cliffs divide the Castelluzzo Gulf and the Bonagia Gulf. 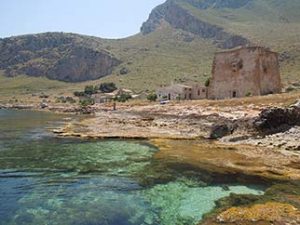 The nature reserve can be reached by foot and followed all the way to the tuna trap of Mt. Cofano. The Tuono Tower, unique in all of Sicily for its square shape and concave walls, is also here. It was built around 1500 to defend the tuna trap and the town. Make sure and take a dip in the sea here as it is prized for its spectacular view. It’s also a trekkers and mountain bikers’ paradise. You can take the trails almost to the top of the mountain. The reserve is prized for its flora and fauna including a variety of orchids.

To think that this is only a small part of the unique and spectacular coast of Trapani.