The FICO Eataly World in Bologna

One of the reasons why I would advise anyone to spend a few days in Bologna is definitely food. Certainly, Bologna has a historical and cultural heritage of inestimable value, but food takes full part in it, exuding history and tradition from every bite. You will learn much more about Bologna by going to dinner in a downtown trattoria than by reading its history on a book! 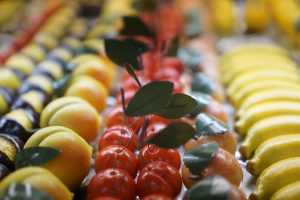 I don’t think it’s by chance that Bologna is the Italian capital of food, not to discredit the other Italian regional cuisines, but there’s a reason if abroad, when you ask someone what he likes best of Italian cuisine, Bologna immediately overtakes the rankings with two dishes in particular: lasagne and spaghetti Bolognese! It is no coincidence if someone, that knows about food – and not only! has decided to enhance the entire Italian culinary heritage within this welcoming territory. The project FICO – alias Fabbrica Italiana COntadina – born in Bologna on 15 November 2017, aims to enhance our national food heritage, within a territory that represents the centre of gravity of gastronomic tradition, as well as the physical centre of gravity of our peninsula.

The Agri-food Park – as defined on the official website www.eatalyworld.it/en/– is located in the area belonging to the CAAB of Bologna, therefore on the outer edge of the city, but not out of hand. On the contrary, ad hoc transportation connections have been set up, with departures from Bologna central station just for those who, like me, would be discouraged from getting there on their own and therefore avoid the use of private cars.

So, on a boring day that often Bologna offers in winter, my friends and I decided to spend a few hours discovering this novelty. Meanwhile, in order to avoid misunderstandings, those who want to drive will suddenly find themselves in front of a motorway barrier similar to that of Melegnano, without even taking the motorway. The ticket will be used to record the time of entry into the parking lot and to determine the final price of the parking, in case you decide to stop for more than two hours (which is not impossible at all, in fact). At each entrance to the park you will find flaming bicycles, three wheels and two wooden baskets, turquoise in color, proving that the matter is serious. Free of charge, just pedal and have fun!
Just to understand us about the size of the park, I recommend the analysis of the map at this link: https://www.eatalyworld.it/media/userfiles/files/mappa-33x40cm%20en. pdf 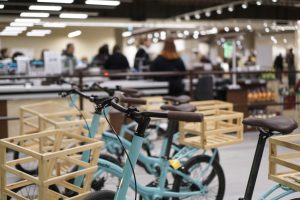 The cycle path is well marked by a sort of roadway that perfectly establishes the axis of symmetry of each section of the park. For this reason, by cycling along it, you have a complete view of all the goodies surrounding you: cold cuts and cheeses, wines, beer, piadina, pork, roasted meats, pasta, fried meats, fish, BBQs, sweets, in short, every sweet tooth wish can be satisfied, as long as you know how to choose where to stop! If you succeed in recovering from this noise of colours and flavours, you will notice how the park tries to enter into the merit of how the Italian gastronomic tradition is carried on by the major companies, internationally recognized as guarantors of good Italian food. Thus, between a roast and a Sicilian cannolo (truly spectacular!), you can browse inside the Factories, so called precisely because they faithfully reproduce, albeit in a limited space, the production processes of some of the key products of our table. Here we find the fresh milk line, pasta factory, bakery, mortadella, chocolate and many other mini-industries, more or less artisanal, that draw attention to a process that eventually becomes transparent and controllable by the consumer.

I would like to emphasise this point, really important for me, because I am at the forefront of the food sector: any person foreign to the processes of the food industry today tends to have the idea that large companies apply processes that are not very traditional and disrespectful of the health of the consumer, only because, as large as they are, they can afford to use low quality raw materials or processes that deplete the properties of the product without any quality control (just some news that manipulate facts or that lead to the generalisation of phenomena). I believe that the intention of the FICO project is also to break away from this preconception from industrial products, especially those for which we should only be proud. 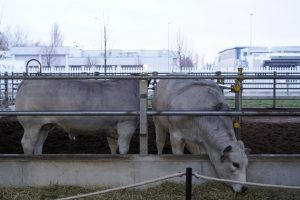 The park is also dotted with recreational areas for adults and children, cooking workshops, beach volleyball courts and educational areas where you can spend time having fun and learning, even for children. Especially for the latter, but not only, the north side of the park hosts the educational farm, with Italian animal breeding areas, to look at and, why not, to touch.

A place with a thousand aspects that try to attract everyone’s attention, from adults to children and where you can spend a whole day or just enjoy an aperitif. A place that shows a cross-section of Italy, the most tasty, but also more touristy, without however, being trivial.

Article and photos by: L. Isidori