The Monumental Garden of Valsanzibio and Villa Barbarigo

You may choose to visit the surroundings of the picturesque area of Galzignano Terme (Padua) for several reasons … However, I ask that you set aside the Euganean Hills and the Church of Sant’Eusebio and follow me on a discovery of the Monumental Garden of Valsanzibio and Villa Barbarigo. As we head towards Valsanzibio (fraction of Galzignano Terme) I will show you three reasons why this 17th-century gem is well worth a visit this summer! 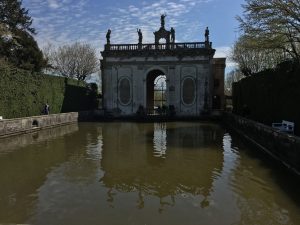 Villa Barbarigo is a Venetian villa dating back to the seventeenth century (1665-1696). It was commissioned on behalf of the noble Francesco Zuan Barbarigo. We owe the rich symbology of the complex to Gregorio Barbarigo, first-born and cardinal of Padua (later Bishop and Saint). The architect Luigi Bernini was one of the main figures involved in the realization of the project. The Villa and its surroundings, in fact, had to represent in all their grandeur not only the importance of the family but also the gratitude to Our Lord, for having saved the noble Barbarigo from the Plague. Although the owners of the Villa have changed over time, the project devised by the founders remains almost unchanged. Villa Barbarigo has received important prizes and awards such as “The most beautiful garden in Italy” (2003) and “The third most beautiful garden in Europe” (2007).

The Monumental Garden has about 150,000 square meters and offers its visitors the opportunity to follow a symbolic itinerary, with precise rules, which will take them from the earthly dimension to salvation and purification. However, there are some very specific rules to follow!

The path begins at Diane’s Doorway, once the main entrance to the Villa. Behind Diane’s Doorway, there are fisheries with fountains and statues. Each of these has mottos engraved on its base. Throughout the garden, there are about 70 statues, 16 fountains, 800 trees, waterfalls, streams, small buildings, fountains, and sculptures. 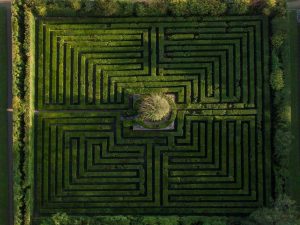 Of particular interest is the labyrinth, about 1.5 km long. At the center we find a tower with a guard that keeps an eye on the brave visitors. It takes about 20 to 30 minutes to venture through and is a must-stop!

Following the map, which is usually provided at the entrance, you will find Hermit’s Cave and Rabbit Island, which looks like a small isolated oasis, populated only by rabbits. It is very interesting to discover the meaning hidden behind these two stages, which dwell on human conditions such as solitude and immanence.

Shortly thereafter, you’ll find yourself facing the Statue of Time, represented by Chrono, and then come the Tricky Fountains. Originally these fountains served as “teasers” to trick the exhausted visitors that it was not over yet! Finally, you find yourself in front of the imposing Steps of the Sonnet, guarded by two beastly statues engraved with Dante’s famous verses. The end of the path is right in front of us: Ecstasy’s Fountain with 8 allegorical statues. Unfortunately, this square isn’t accessible, but you can still enjoy a beautiful view of its interior and the facade of the Villa. 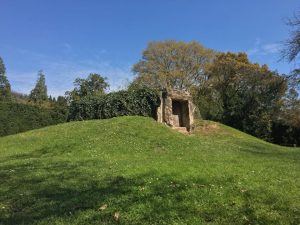 The Garden can be easily visited without a guide, thanks to a map that is provided at the entrance to each visitor. Or by choosing the supplemental ticket, you can choose to take a standard or superior guided tour. I recommend the standard visit to those who already know a little about the history of Villa Barbarigo and want to discover something about the vast symbolism of the Garden. Personally, I found a competent, prepared and very helpful guide. His tour was so engaging, that the time just flew!

To wrap it up, the Monumental Garden is a Baroque wonder to be discovered through a multitude of symbols that accompany the visitor from beginning to end.

For more information in English visit the official site: Monumental Garden of Valsanzibio