Let’s begin by clarifying that this is not your ordinary castle. The Rocchetta Mattei Castle is not Medieval, nor is it Swabian, nor Aragonese. It might just be what you would least expect to find in the hills of the Emilia-Romagna region, yet, there it is in all of its mystical, magical splendor.

Just an hour from Bologna in the Apennine Mountains, the “Rocchetta” rises majestically into the sky. At first glance, this surreal monstrosity will probably make your jaw drop. You’ll wonder if you’re actually still in Italy or if you’ve been transported into some wonderland out of a Lewis Carroll tale. Now that you’re curious, here is the story behind this architectural masterpiece. 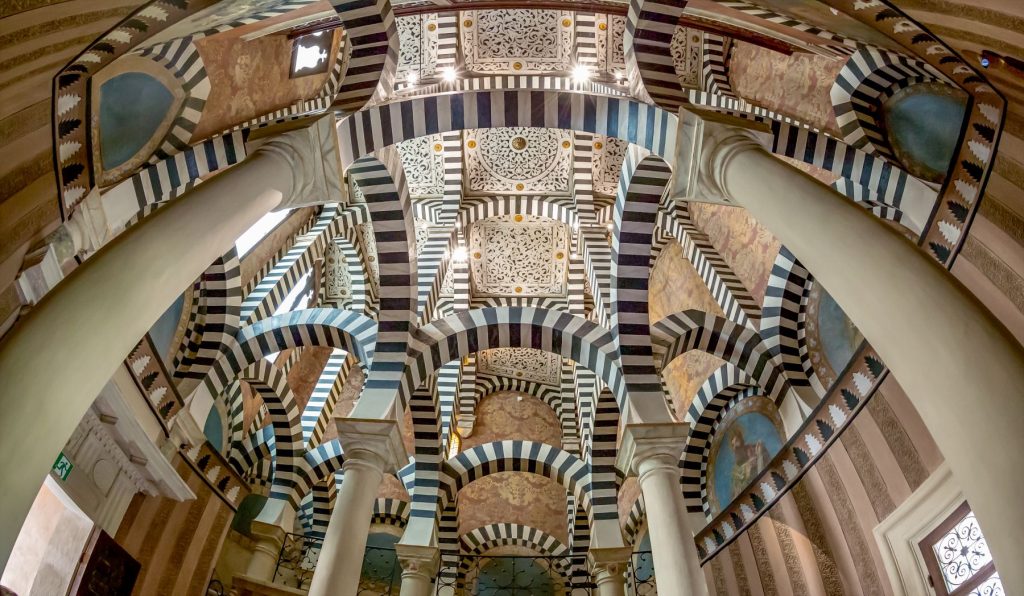 In order to fully understand the “Rocchetta”, you must first understand its creator. Count Cesare Mattei was a brilliant scholar, politician, and physician who actually invented electro-homeopathy. He was born in Bologna in 1809 and in 1850, he purchased the land where the ruins of a previous fortress stood. Mattei dedicated the rest of his life to the continual building of his castle and to his studies and medicine.

When he died in 1896, the family continued building on the castle until 1959 when it was sold. In 2005, the Cassa di Risparmio Bank of Bologna purchased it and began a massive restoration project which is still underway. 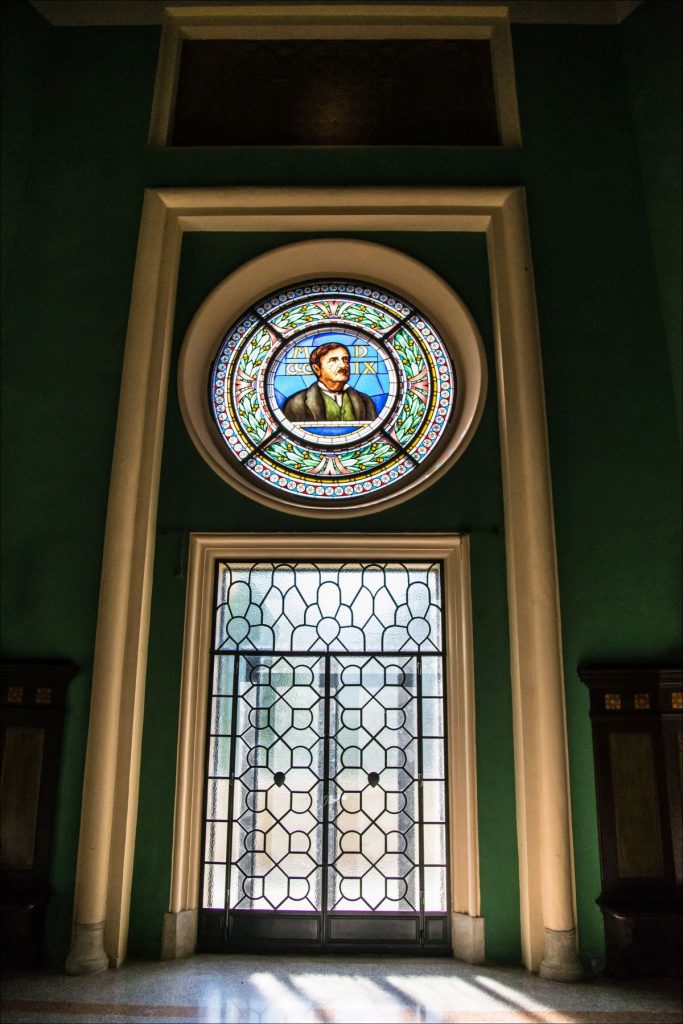 An eclectic mix of architectural styles, the “Rocchetta” is eye candy for anyone who is artistically inclined! Mattei’s tomb is held inside a chapel intended to reflect the cathedral mosque of Cordoba, Spain- the Mezquita. The courtyard replicates the Alhambra in Granada with authentic Majolica tiles.

Every corner you turn, every staircase you climb, everywhere your eye wanders, will transport you to a mythical world and will have your head spinning in a Medieval-Moorish-Neo-Classical frenzy.

Cesare Mattei had many illustrious guests who would visit him over the years and who were also his patients. One of the most sentimental rooms is the “Room of the 90s” which he designed for his 90th birthday when he had planned to invite 89 other people who were also 90 years old. Unfortunately, this dream of his never came to fruition because he died at age 87. 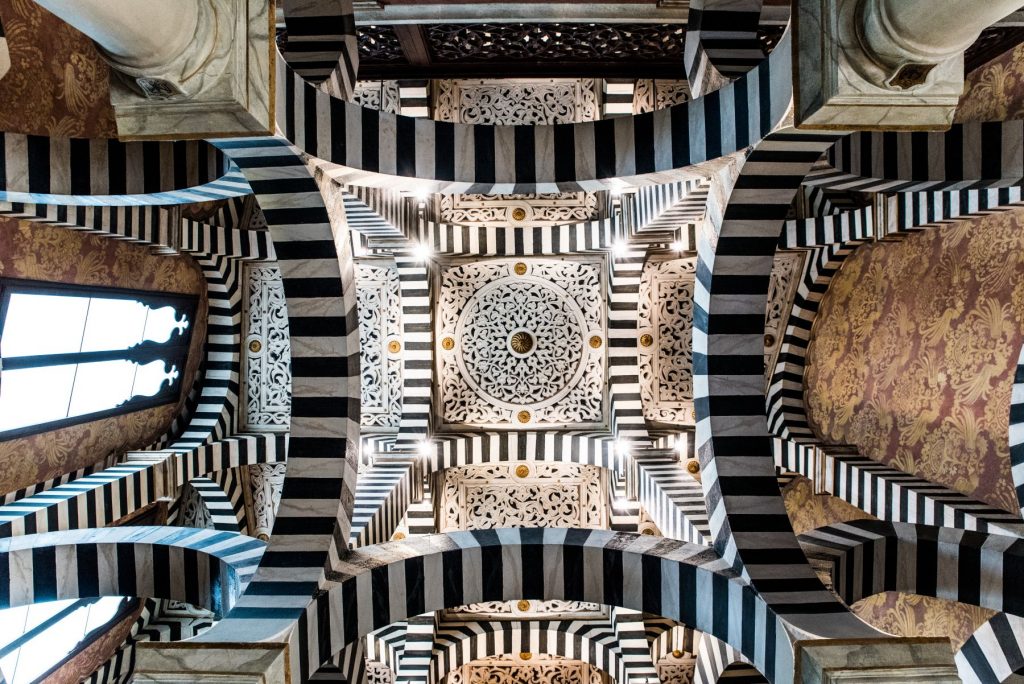 Symbolism and irony are everywhere! See how many examples you can find as you wander through the rooms.

Some of the original furnishings survived over the years but most were either destroyed or looted during WWII.

For details on how to visit and guided tours, visit the official website.

Other unique castles in Italy: Sammezzano in Tuscany and La Scarzuola in Umbria 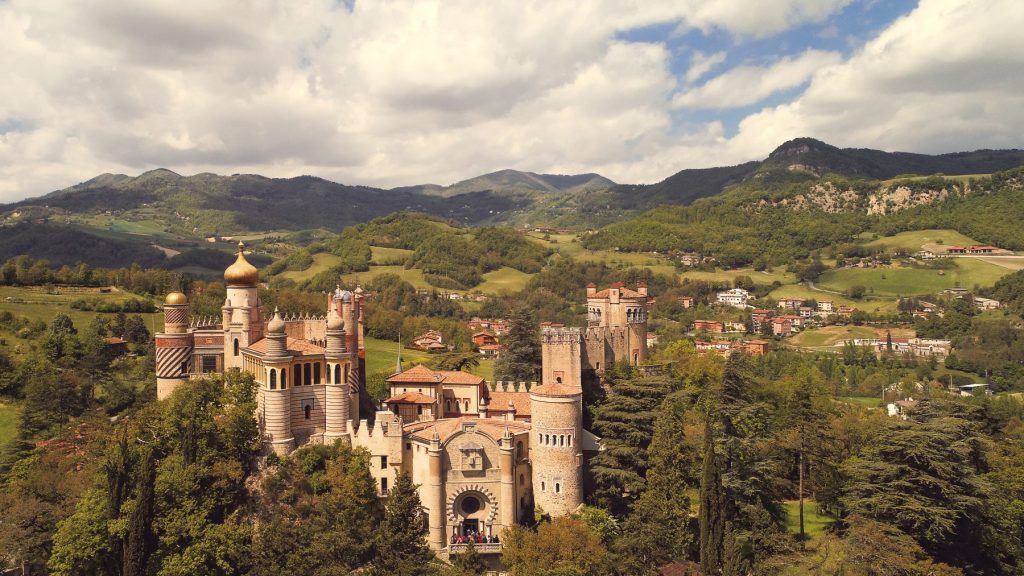