The Town of Cagliari in Sardinia: History, Culture and Natural Beauty 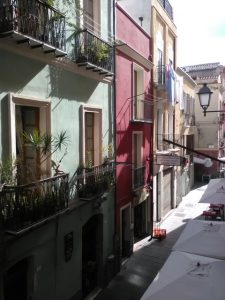 A few years ago I had the chance to visit Cagliari. The harbor and the blue sea are certainly what initially attracts visitors’ attention. Boats, yachts, and cruise ships sway back and forth on the waves of a perfect sea.

In front of the harbor and the train station, is via Roma, one of the main streets of the town. Under the arcades, you’ll find all kinds of caffes, restaurants, and shops. This brings you to the famous Marina district, one of the oldest in Cagliari once inhabited by fishermen.

Nowadays, it is a historic area with narrow streets where you’ll find very typical Sardinian shops alongside the most popular souvenir and ethnic ones. But every corner of Cagliari is a surprise because, by simply walking, the town’s story emerges with every step. 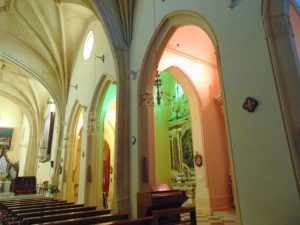 In the Marina district, you can see the ruins of the destroyed church of St. Lucy, or the complex of St. Eulalia, a Spanish martyr. The complex is composed of a multistratified site: the church, which dates back to the 14th century with evident subsequent interventions; the ecclesiastical museum which preserves liturgical and devotional objects and the perfectly preserved and valued archaeological site. 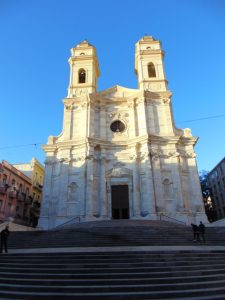 Via Principe Amedeo is uphill, but turning left you will be amazed by the magnificent façade of the Collegiata di  Sant’Anna. It is in limestone, which has pink and golden nuances in the light of the sunset. It is possible to see its dome from the highest point of the whole city dominated by the rock.

Going up even further, you’ll reach the area of Castello, where the facing doors of St. Cristina and St. Pancrazio. Here is also where  you’ll find the Archaeological Museum inside the so-called Citadel of Museums. Not far from here, you can reach the Roman amphitheater.

To those who love shopping, I suggest they head towards via Manno, where there are numerous shops. 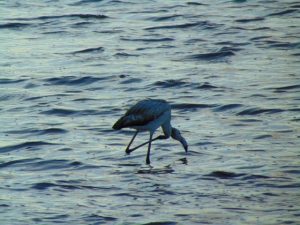 Cagliari and its surroundings are also wonderful for their natural beauty. Not too far from the town, the Molentargius Nature Park develops with the salterns in which there are dozens of pink flamingos that walk placidly under the watch of the Sella del Diavolo promontory. Among the destinations not to be missed is the Poetto beach (Quartu Sant’Elena) with fine, white sand framed by an intensely blue colored sea.

Finally, don’t miss the opportunity to take a short trip out of Cagliari, heading towards Nora. The Roman site, located on the seashore, will certainly not disappoint! 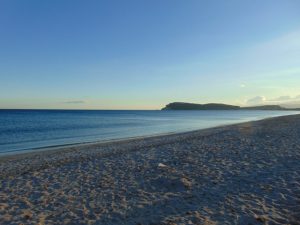 Before leaving Cagliari, make sure you have tasted some Sardinian specialties, including guttiau bread, frattau, and the classic carasau bread.

Article and photos by Cristina Cumbo

Post Views: 1,597
C. Cumbo
Visiting the Po Delta Park in the Veneto Region
A Guide to the City of Jesi in the Marches Region