Venetian Villas Along the Brenta River

The Riviera del Brenta connects Padua with the Venice Lagoon in a 36 km path, along which we find the beautiful Villas of Brenta, frequented in past centuries by the likes of Casanova, Galileo, Byron, D’Annunzio, the royal families of France and Russia, Napoleon, and the Habsburgs.

The Brenta River was navigable along this stretch as early as 1500 and soon became the “fashionable canal”. It was an ideal continuation of Venice’s Grand Canal, a waterway easily navigable by comfortable boats called burchielli.

These boats were equipped with a large wooden cabin and finely decorated balconies. They were both beautiful-looking and practical for transporting Venetian nobles who used them to reach their “country villas” along the Brenta River. They were rowed from San Marco to Fusina where they were then pulled by horses on side paths to the river, as far as Padua. On the way, they stopped in front of the villas to allow the owners to get off in front of the house.

The Beginnings of the Brenta River Villas

As early as 1345, the Major Council of the Most Serene Republic of Venice allowed its citizens to purchase land on the mainland, which up until then, had been prohibited. Wealthy Venetian merchants diversified their economic interests, which had previously been directed toward the East, buying up property along the banks of the river. They had country residences built in order to keep an eye on their investment properties.

They built complexes that included the manor house as well as administrative buildings. Adjacent to the villas, there were stables, sheds, barns, and the staff quarters.

The Golden Age of the Riviera del Brenta

Various types of villas were born: the villa-company, the villa-temple, where intellectuals and artists gathered, and the villa-palace, very often the representative seat of the doge for parties and banquets. Many villas were sumptuous residences, the work of famous architects, and frescoed by famous painters including Tiepolo.

They also had the function of impressing foreign guests invited to conclude commercial exchanges. They were the symbol of economic stability and political power. Their owners were skilled merchants, masters in entertaining and “spoiling” their illustrious guests with wine brought from the Tsar of Russia’s reserves, cod from northern Europe (later to become a staple of Venetian cuisine), and precious oriental spices.

In addition to being “places of work”, the villas became the Venetian nobility’s holiday resorts par excellence. They were testimony to a period of opulence and splendor that lasted two centuries.

The cheerful companies of vacationers moved from one villa to another enjoying the royal balls and performances that continued throughout the summer.

Alas, in 1797 Napoleon put an end to the glorious Republic of Venice and the phenomenon ended, leading to the slow decline of the Brenta Villas.

Today, there are very few villas that can be visited. Among the most grandiose is Villa Pisani in Stra’ which has been called by various names including the “Ducal Palace of the mainland”, the “Nazionale”, and the “Queen of Venetian Villas”. It consists of 114 richly furnished rooms, a garden famous for its boxwood labyrinth, and above all, the Tiepolo ballroom with its beautifully frescoed ceiling depicting the power of the Pisani family. 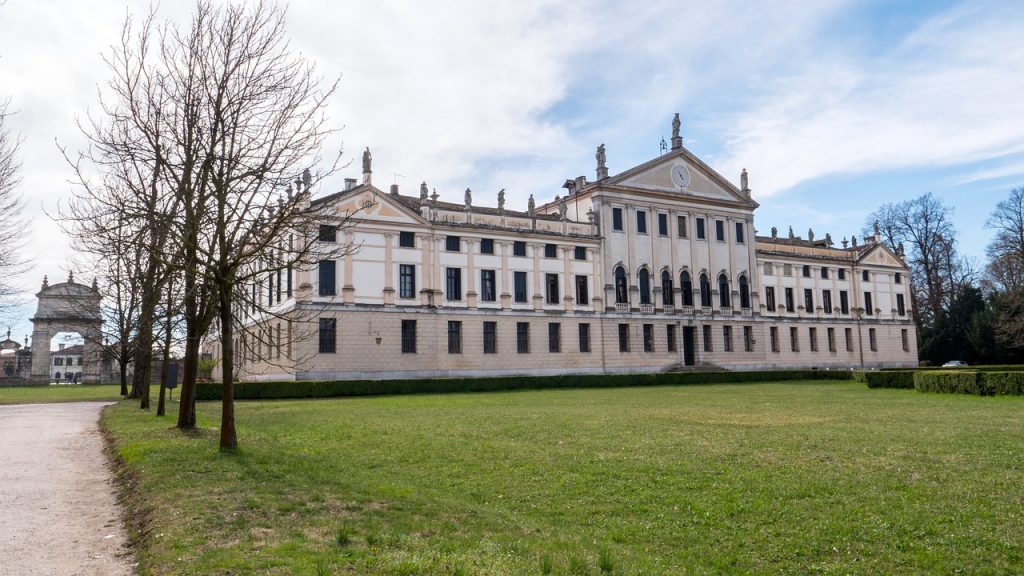 Another villa to visit near Mira is Villa Foscari, known as the “Malcontenta”, designed by Andrea Palladio. It is a prime example of a villa temple with its monumental vestibule and columns. Its melancholy is reflected in the canal among the weeping willows. Legend has it that it owes its name “Malcontenta” to a woman of the Foscari family relegated to its walls in solitude for 30 years to serve her sentence for her promiscuous conduct.

If you would like to visit the villas today, you can book a tour with a private ferry company with routes between Padua and Venice.

The ideal time of year is probably springtime but it’s possible to book a tour at any time between the months of March through November.