Venosa, Basilicata: a Village Suspended Between Past and Present

Immersed in the Mount Vulture area, the city of Venosa is located in one of the most luxurious places in the Basilicata region. The Vulture Volcano (Monte Vulture), now extinct, made this land especially fertile and attractive for the populations of the past. In the Venusian village, you can find evidence of the Samnite, Byzantine and Lombard peoples, but it’s the Roman past that echoes along the streets, buildings and monuments.

Various peoples reused the Roman materials over the centuries and evidence of this can be seen on house facades and in churches. Roman ruins intermingle with other period architecture and prevail throughout the city. The Orazio House is a Roman thermal building attributed to Venosa’s most famous poet.

The 15th century castle rises in the middle of Umberto I Square; its bridge guarded by two lion statues from Roman times. The National Archaeological Museum of Venosa is located in the basement gallery of the castle and cannot be missed. Going toward Via Roma, don’t miss the magnificent 13th century Angevin Fountain, which shares the same ornamental theme of lions. Turning from Corso Vittorio Emanuele toward Vico Gravattone, you stumble on one of the innumerable Christian epigraphs walled inside the buildings facades. By going ahead on the main road, you’ll find the Renaissance Cathedral of Saint Andrew which was built with the material from the Roman Amphitheater. 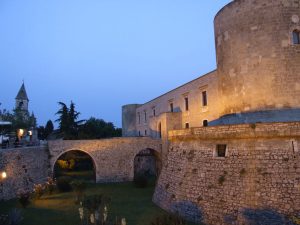 Roman antiquity is ever present far from the city center. The famous Archaeological Park includes the ancient baths, the domus, and the amphitheater. The impressive Abbey of the Holy Trinity’s (Abbazia della Santissima Trinità) stones bear Roman inscriptions, and, finally, the Jewish and Christian Catacombs witnessed the history of Christianity in this part of Lucania.

Visiting this site in the province of Potenza is like taking a trip back in time; bearing witness to the past. By simply walking along the streets of the city center, the alleys and monuments, you can relive distant times and rediscover the ancient Roman colony. Suspended between past and present, Venosa is the ideal destination to recapture the history of Basilicata.