After descending the green hills of the Metauro River Valley, and heading towards the Adriatic Sea, you’ll reach the city of Fano. A large, ancient arch welcomes you to the city’s historic center.

Fano was originally named Fanum Fortunae after the temple of Fortuna built in the III century B.C. by the Romans in honor of their victory against the Carthaginian Asdrubal.

Its massive arch was also built by the Romans, many years later, in 9 AD. during the empire of Augustus. Constructed of travertine, it has three openings: a large central one for wagons and horses and two smaller ones for pedestrians. It’s no surprise that the Arch of Augustus has become the symbol of Fano. 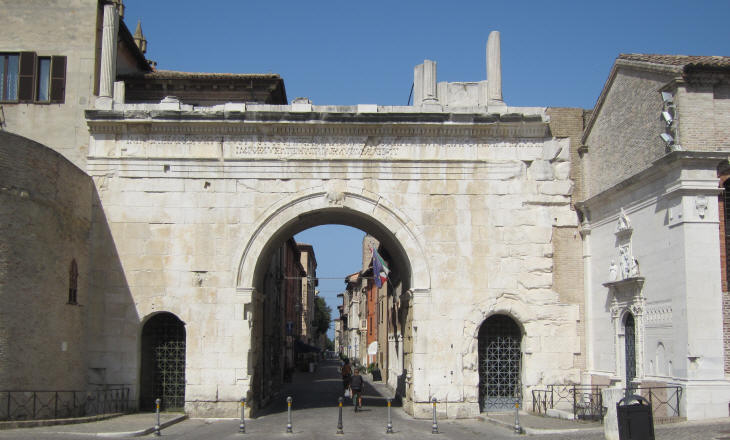 Facing the arch, if you take a left turn you can walk along the city’s ancient walls. Built by the Romans and expanded in the Middle Ages by the lords of the city- the Malatesta family- they mark the boundaries of ancient Fano.

When the wall ends, turn right and walk along the ancient Cardus Maximus, which is now Corso Matteotti in Fano’s center. Pedestrians and bikers move slowly along the Corso to have a look at the many shop windows and eventually be led to the real heart of the city- Piazza XX Settembre.

Two important buildings are located in this square: the Palazzo del Podestà (Teatro della Fortuna), a medieval administrative palace which was converted into a theater in the 19th century, and the Palazzo Malatestiano, built in the 15th century and now the home of the Museo Civico.

Traverse the piazza and take the small alley on the left between the theater and the palace and you’ll reach an interesting piazza with a long building in the center: the Fish Market. If you continue on, you’ll reach Via Nolfi– another main street. Turn left and, at the end of the street, you will see the Rocca Malatestiana. This enormous, beautiful and well-preserved fortress was built in the 15th century and today hosts cultural and musical events.

After visiting the fortress, take the pass railway underpass and walk past the Albani Canal and its boats to reach the small lighthouse at the harbor. The lido with its sandy beaches and modern pubs is to your left and the Sassonia with its pebble beach and quaint restaurants is to your right.

Don’t miss the Marina dei Cesari with its 400 boats and the Lisippo Walk, a route along the cliffs. The walk extends for almost a kilometer above the breakwater that encircles the tourist port of Fano and is one of the longest and most panoramic of the Adriatic Sea. At the end of the route, stands the beautiful statue of Lisippo. It’s a replica of an ancient Greek work of art donated by fishermen from Fano in 1961 (the original statue can be seen in the Getty Museum in California). 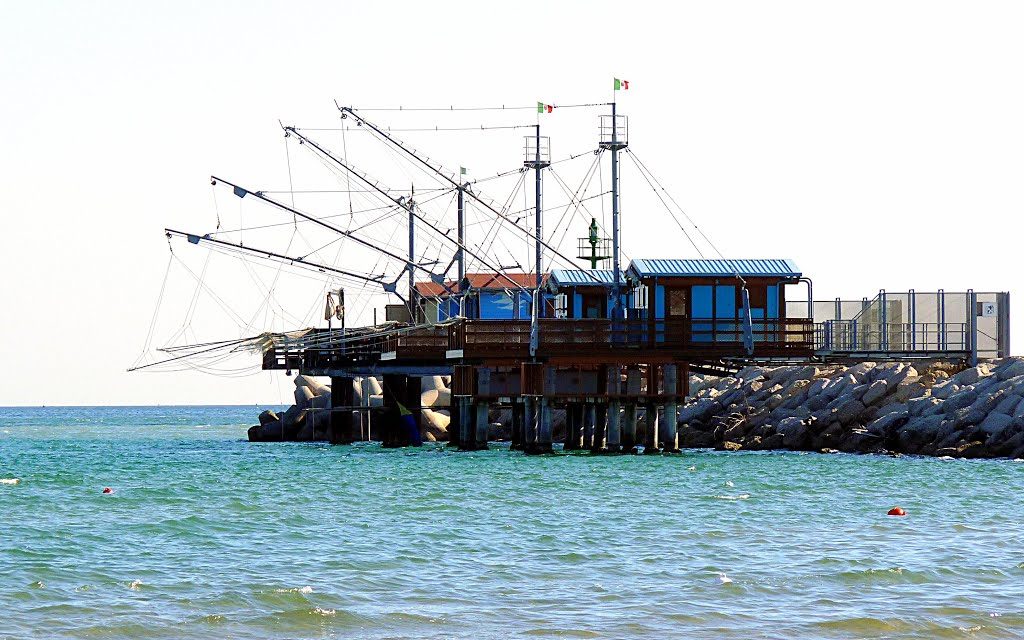 From the statue of Lisippo, you’ll notice the trabucchi– a massive construction for fishing built from wood consisting of a platform anchored to the rock by large logs that jut out into the sea. They can also be found along the Abruzzo coastline.

Before you go, you must try the traditional moretta coffee drink made with three different liquors and lemon peel. Each bar has its own special recipe and fishermen drink it to get through the cold and windy days at sea.

Read about the historic Carnival celebration in Fano!