You have probably seen pictures of Alberobello and wondered if such a place really exists. Unlike any other place in Italy, and truly one of the most unique in the world, the conical roofs of the trulli houses look like a fairy tale village. We can assure you that the village of Alberobello is very real and that people actually live and thrive here in this town in the Bari province of the Puglia region.

The History of the Trulli

Not surprisingly, the history of the trulli goes back hundreds of years. These unusual homes are known as drystone dwellings and can be round or square-shaped. The roofs are always cone-shaped and the interior walls are very thick and made of wood but painted white.

The entire region of Puglia has deep agricultural roots and in the 14th century, one of the counts decided to construct temporary housing and storehouses for the peasant farmworkers. He devised an ingenious way to avoid paying higher taxes by claiming the area was uninhabited because the trulli could easily be demolished and rebuilt as needed. Alberobello didn’t officially become a town until 1797 with almost 4,000 residents.

Today, it has gained worldwide notoriety and became a UNESCO World Heritage Site in 1996. Aside from its titles and accolades, it is more about the feeling you get when you visit. It’s pure magic.

There are two areas of the greater town of 11,000 people that are composed exclusively of trulli: Rione Monti and Aia Piccola, a quiet residential neighborhood. Rione Monti has about 1,000 trulli houses and is the more touristy destination of the two. Don’t think for a second that you’ll only find trulli houses because you’ll also be pleasantly surprised to find bars, restaurants, shops, and even churches built in the same way. Of course, you can also stay overnight in a trullo hotel or bed & breakfast for an even more authentic experience.

Be sure to visit the Olive Oil Museum and the regional museum (Museo del Territorio) both located in Aia Piccola which will give you a glimpse into both Alberobello’s past and present customs. 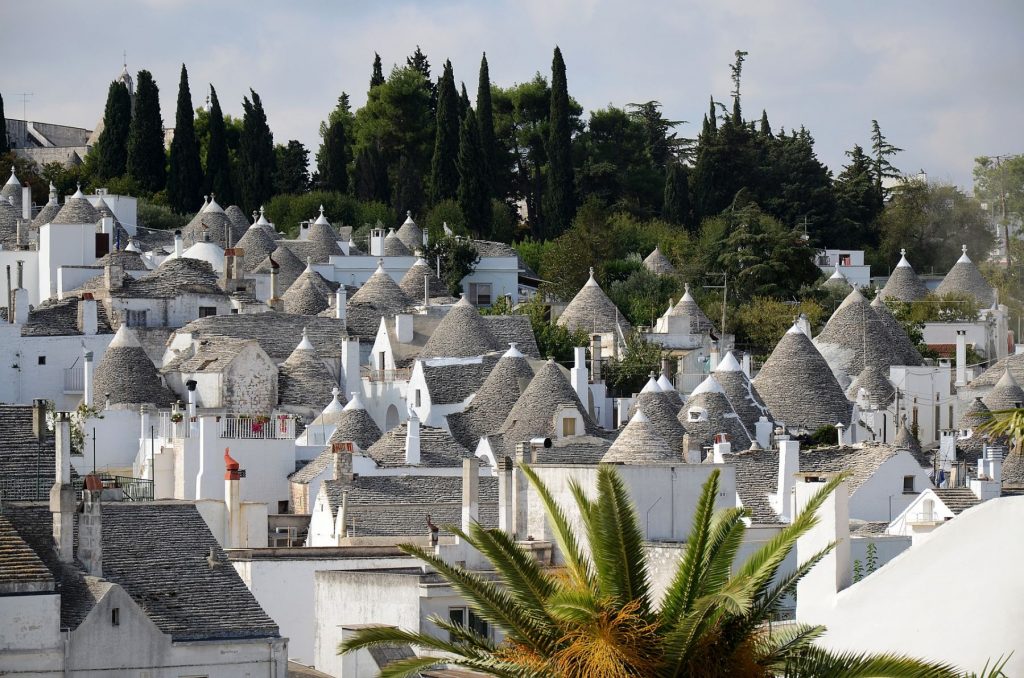 Outside of these two districts, just behind the Church of Saints Cosma and Damiano, you’ll find a very particular trullo. It is very rare to find a two-story trullo because they are very difficult to build, but the Trullo Sovrano is an anomaly. This gigantic building is the largest in Alberobello and has been used over the centuries for numerous purposes from a papal house to an apothecary. It’s the only one to have two stories joined by a staircase.

While wandering around in Aia Piccola, there is a chance you may be able to see elderly women preparing homemade pasta in their doorways. The two most famous pasta shapes here are cavatelli and orecchiette most commonly served with broccoli rabe, simple tomato sauce, or ricotta. Fava beans and other greens are also a staple as well as lamb, chicken, and pork.

Read more about other fantastic destinations in Puglia!

Post Views: 467
Redattore
Orta San Giulio – One of the Most Beautiful Villages in Italy
Thun Castle: One of the Finest in Trento