Weekend in Mantua: What to See in this Extraordinary Lombard City

Italy, a country where you can always make new and surprising discoveries among its cities, villages, ancient centers and fine architecture. Lombardy offers a wide array of amazing places to visit but which are often overlooked and overshadowed by Milan.

Mantua is a must-see for those who intend to embark on a journey of the most beautiful villages in Italy, suitable for either a magical weekend or a longer stay.

Once the current health emergency is finally over, it will be impossible to resist spending a fabulous week in the wonderful city of the Gonzagas. Check out this itinerary to help you plan for it!

A Weekend in Mantua: the Gem of the Po Valley

The city is located on the Mincio river, in the lower Po Valley. Its existence is literally “enveloped” by four lakes, artificially created by the waters of the river in the twelfth century, respectively the Lago Superiore (upper), the Lago di Mezzo (middle), the Lago Inferiore (lower) and the Paiolo (“cauldron”). The latter eventually dried up because it was considered unhealthy. Perhaps what not everyone knows is that Mantua came to be in very ancient times, precisely at the time of the Etruscans, the first to settle in the city, followed by the Romans. Virgil himself, one of the most important literary personalities of all time, was born right here.

The history of Mantua has seen the succession of many famous dynasties and the intertwining of many stories: the Canossa, the Banacolsi, the Gonzagas. All of whom left their indelible imprints on the events of Mantua and ruled over the city until the eighteenth century when the French and Austrians dominated before Mantua became part of the Italian state.

Today, Mantua reflects a heritage of inestimable value and timeless history, earning its entry onto the list of UNESCO World Heritage cities, thanks also to the Gonzaga family who made it one of the most important centers of the Italian Renaissance. All that remains is to plan an exciting weekend to discover this surprising location! 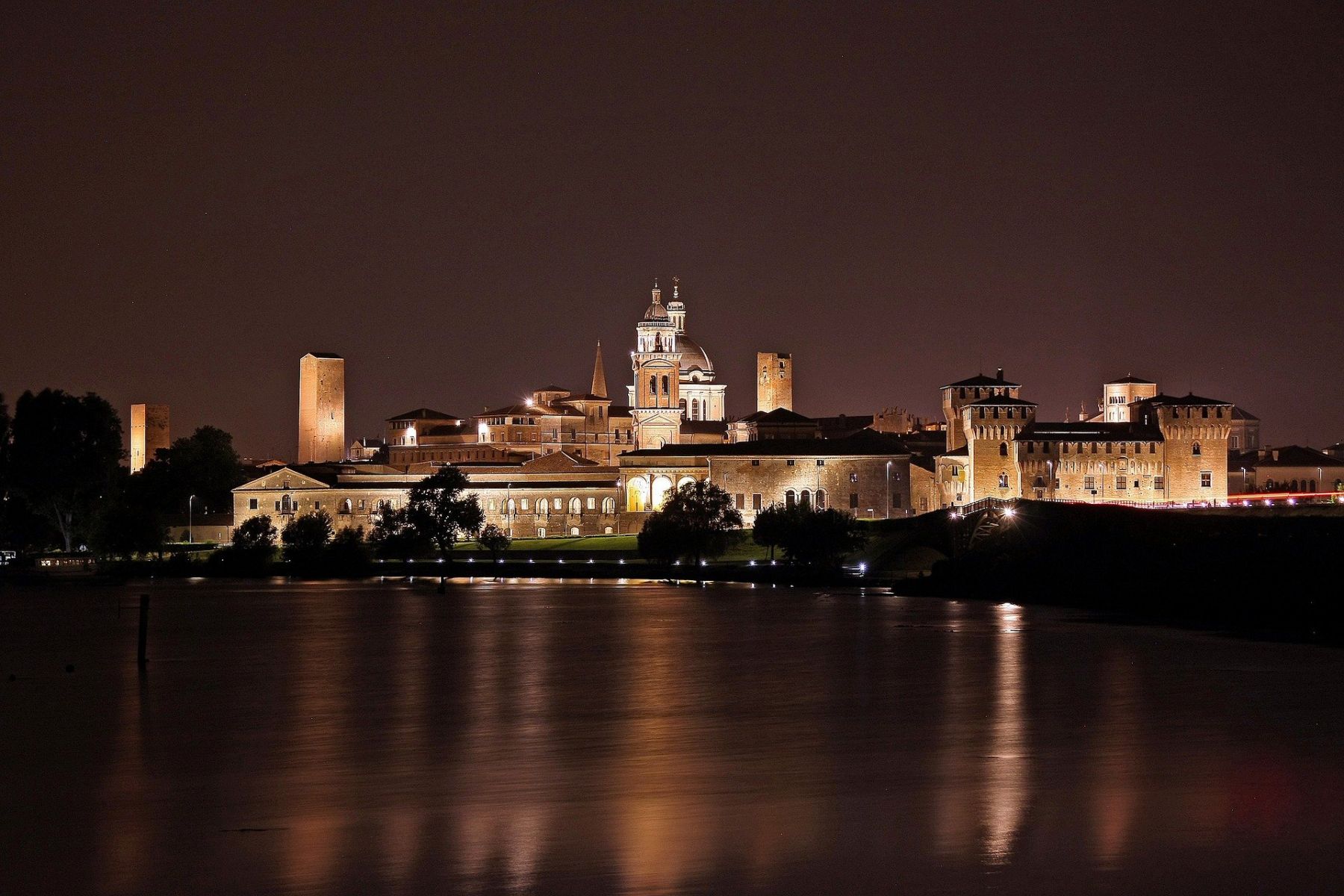 Our fantastic weekend in Mantua starts in Piazza delle Erbe, at the heart of the city and the perfect starting point.
This truly fascinating piazza has a magical atmosphere stemming from its monuments and buildings that date mostly from the Middle Ages.
We’ll start from Palazzo della Ragione: the large building was erected between the 11th and 12th centuries and had the task of fulfilling the various tasks of public utility for citizens, as well as the administration of justice. Today, not much remains of its ancient appearance: the main hall hosts temporary exhibitions of various kinds and contains some original frescoes.

In the immediate vicinity we find the Clock Tower, built in the year 1472, with an imposing appearance and almost resembling the famous Clock Tower of the city of Prague in the Czech Republic. The large clock in the center is the work of Bartolomeo Manfredi and it should not be considered only a decorative element. In fact, it provided a lot of practical information to citizens, such as the positions of the planets, the lunar phases and the zodiac signs, the best days for sowing and much more. A curiosity: although the clock was very helpful for many daily activities, it did not indicate what would be considered fundamental today- the minutes. Apparently, it was not that important. Knowing the hour was the only thing deemed useful for organizing one’s day at the time. Truly a different era than our own!

The Museum of Time is housed within the clock tower and makes for a fascinating visit among its various objects and gears that trace the history and technical composition of the clock- The gigantic gear with which the clock still comes to life today is exhibited in La Sala del Meccanismo, but today it also indicates the minutes. Be sure to try and visit at 11am when the tower seems to come alive with a new vitality: the gears begin to move and the floor to vibrate. An incredible engineering miracle that is worth fully experiencing. After the tour, you arrive at the Panorama Room where you can stop to admire a breathtaking view over the whole city.

A few steps away, you can go to the Rotonda di San Lorenzo, whose construction was commissioned by Matilde di Canossa and completed between the 11th and 12th centuries. Guglielmo Gonzaga decreed its closure as a place of worship, so much so that over time the Rotonda underwent reconstruction and that by the end of the sixteenth century led it to be used for other purposes. In the early 1900s it was decided to restore it and reopen it to the public as a place of religious worship. The history and the changes it has experienced have almost completely erased the ancient structure: only a few fragments remain of the original frescoes that decorated it. Admission is free, but donations are welcome. 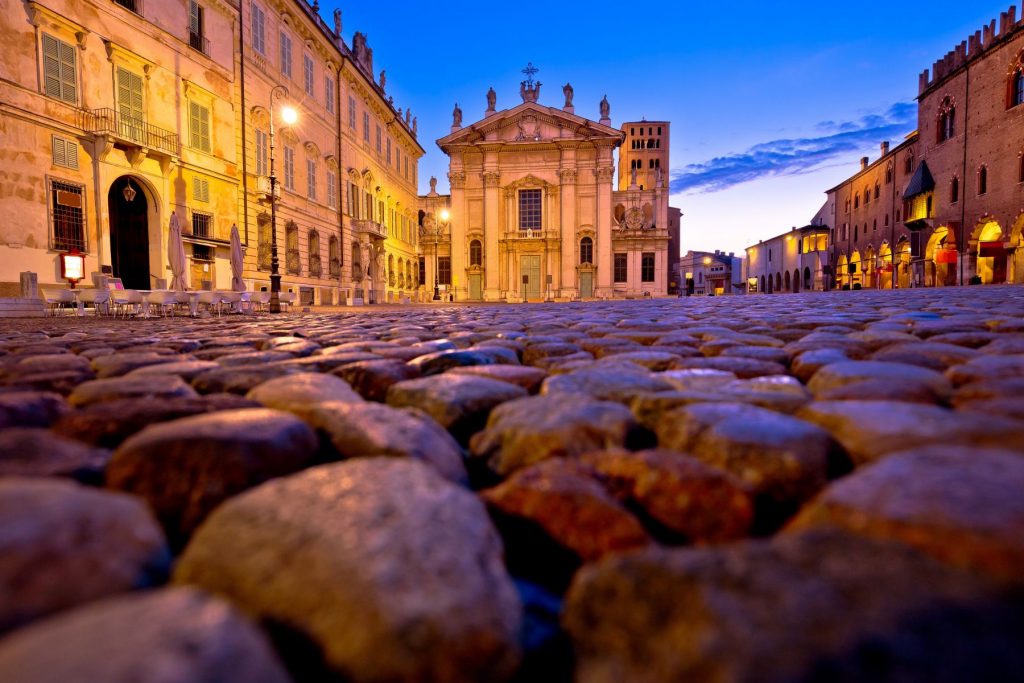 And now we’ll head to Piazza Mantegna, not far from Piazza delle Erbe, where your eyes will feast on the beautiful Basilica of Sant’Andrea. The project was originally begun by Leon Battista Alberti, who unfortunately died at the beginning of construction in 1472. If the exterior with its Renaissance style with an arch and a tympanum provoke a sense of wonder, the interior of the Basilica will leave you breathless. Massive and impressive, it has a single nave with a barrel vault and fake coffers. In one of the side chapels, there is the tomb of the famous Andrea Mantegna, while the crypt of the basilica preserves a relic, known as the “Precious Blood of Jesus”, an element very dear to the history of Mantua and its traditions.

Behind the Basilica we find Piazza Leon Battista Alberti and this facade of the church almost seems to belong to a different era or building, with its rough red brick decorations. What undoubtedly remains constant is its enormous charm.

Leaving the Basilica, you come across the characteristic Palazzo del Mercante Boniforte da Concorezzo and then continue along Via dei Giustiziati, from which you can admire the back of the Palazzo della Ragione and the Rotonda. You’ll end up in front of a magnificent palace- the Palazzo del Commercio.

Continuing the tour on foot, returning to Via dei Giustiziati and taking Via Roberto d’Ardito, you arrive at the Teresian Library, part of the Palazzo degli Studi complex and where you’ll want to go inside, in particular the Teresian Rooms.

In front of the library lies the Bibiena Scientific Theater which deserves some attention. It’s worth going inside this small theater which you wouldn’t expect to be so highly decorated and frescoed.

From here, you can head towards the nearby Piazza Sordello to visit the Palazzo Ducale and the Castle. Inside the palace, you’ll find yourself walking in rooms finely decorated with frescoes dominated by wooden ceilings. Unfortunately, the original furnishings are not present which undoubtedly would have given it even more character. 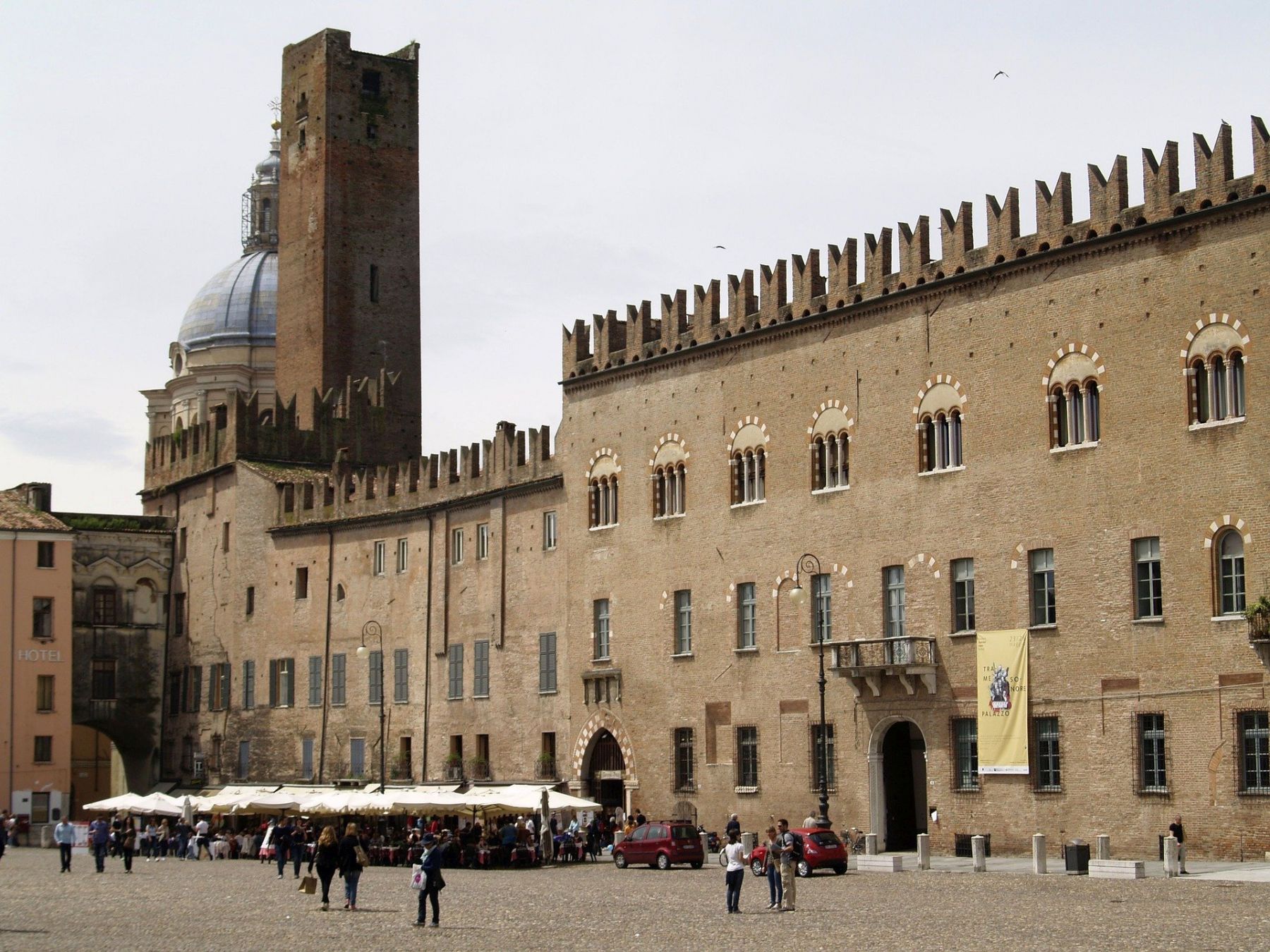 The next part of the visit takes place at the Castle of San Giorgio, in particular in the Camera Picta del Mantegna. Like the Ducal Palace, one initially feels a little disappointed to discover that there are no furnishings or internal elements to populate the large spaces of the house. Despite this, amazement and wonder soon return to animate hearts and minds, when you enter the Camera degli Sposi. Its decoration was commissioned by the great Andrea Mantegna a few years before the birth of Isabella d’Este and is considered the most beautiful room in the world, as well as the greatest work of perspective created by Mantegna, to which the artist dedicated himself from 1465 to 1474. The name, in reality, deceives: its realization is in fact not intended for a wedding room, nor for a bedroom in the true sense of the word, although the hook that is on the ceiling which held a bed canopy does suggest it was used as a bedroom at times. The primary function of this room was, instead, to amaze the guests that Duke Ludovico Gonzaga gathered inside to discuss important matters of state. And there is no doubt, he succeeded and still succeeds in his intent!

Leaving the Castle, other interesting exciting ideas for the tour appear nearby: the Casa del Rigoletto, of which the courtyard with the statue of the famous jester is clearly visible, and the Cathedral of Mantua. The Cathedral, also called the Cathedral of San Pietro, has a history behind it that spans centuries, influenced by styles and events that have made it an iconic element for the city. The Baroque façade, which seems almost superimposed on the surrounding Gothic structure and culminating in a Romanesque bell tower, shows us the great artistic mix that gave life to the complex structure, which certainly also made it fascinating. The interior of the Cathedral has five naves and is surmounted by a precious coffered ceiling.

At the end of this day full of art and antiquity, it is almost natural to think of relaxing with a pleasant boat trip on the lake, with which to enjoy the panorama of the city center directly from its waters.

There are tours available, some with limited spots, so it’s advisable to book ahead of time.

The day begins with a visit to the Palazzo d’Arco.

The palace can only be visited by purchasing the guided tour, which allows you to fully discover the secrets and history that have transpired within these walls, in particular, that of the families who lived there, such as that of the d’Arco. The interior rooms, perfectly and finely furnished, seem to still host the lives of the characters of the past.
The palace offers richly furnished and painted rooms, including the Sala dello Zodiaco, a beautiful and fascinating library of ancient and valuable texts, a perfectly preserved kitchen and much more. The last part of the visit is a journey inside the rooms of the last heir of the family, who, once widowed and childless, decided to bequeath the Palace and all its possessions to the city of Mantua, so that they could become a public museum. Even today it is the Fondazione d’Arco, which he established, that takes care of the management of the building.

At this point, our visit will take us a little further out to Palazzo Te and you may wish to go by car, or if the weather is nice, on foot. It is perhaps the most important of the city’s architectural monuments, as well as the undisputed masterpiece of Giulio Romano. The so-called “villa of leisure and recreation” was designed for Federico II Gonzaga with the aim of impressing guests. Perfectly managing to achieve the purpose, especially in regards to the Chamber of the Giants, a real prodigy of art: a room designed to capture the visitor in a whirlwind of emotions that are able to completely immerse you in the scene, without stopping and without a way out. 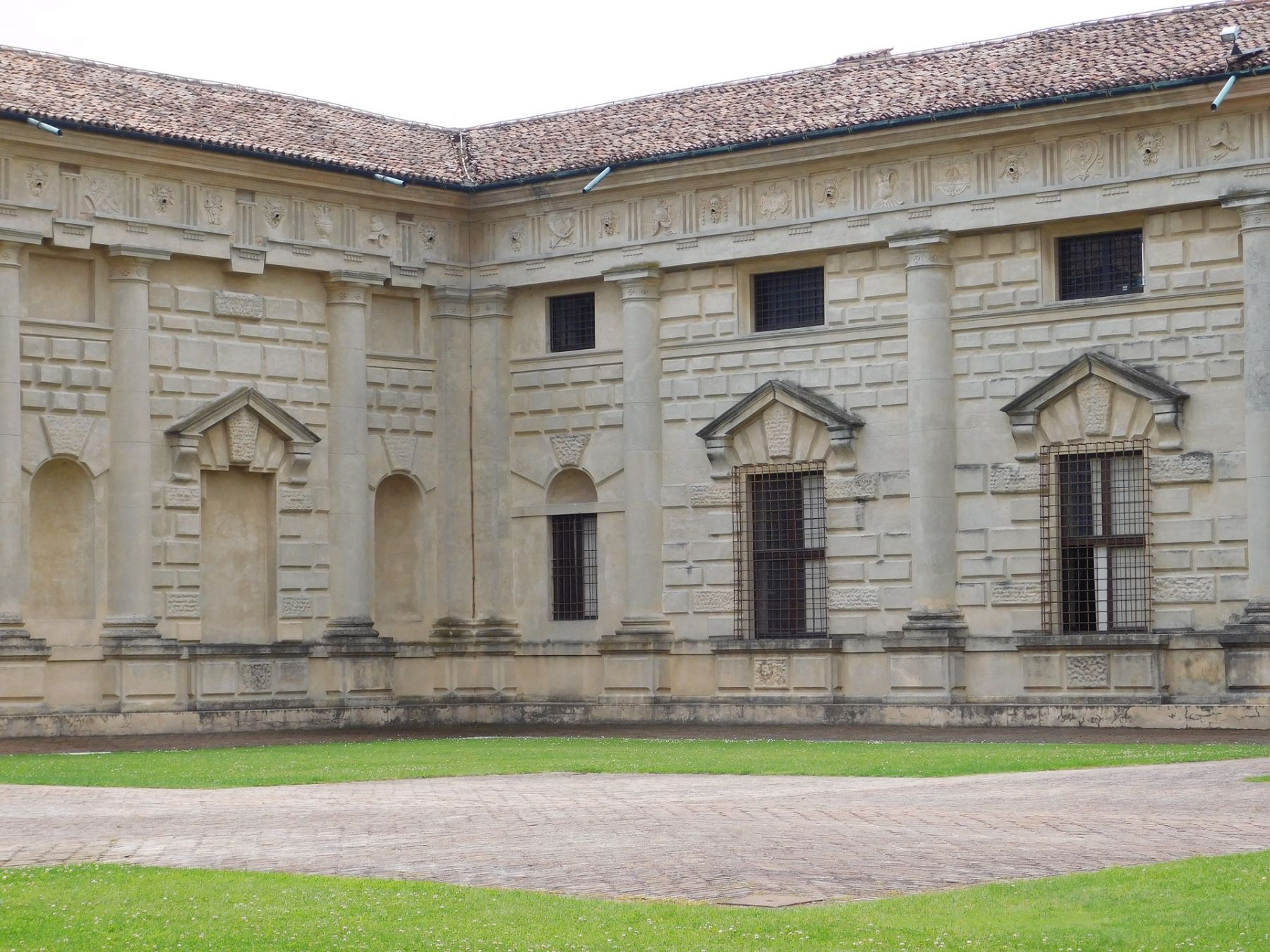 If you want to get to know the surrounding area better, keep in mind the Casa del Mantegna. Equipped with a famous courtyard and used as an exhibition space, as well as Palazzo Sebastiano, it now houses the City Museum. Unfortunately, little remains of the ancient splendor in this historic building. Different and ruthless uses, including the one that saw it as a deposit, or as barracks and finally a lazaret, have almost completely changed its face.

Mantua offers so much and undoubtedly tells a story articulated in great and important events. With its small size, it allows the visitor to discover its most important secrets even with a two-day visit, perhaps on foot, walking through the streets of the center. A few more days is ideal for enjoying even more suggestive views in the vicinity, for example with a visit to the town of Sabbioneta.
In beautiful Lombardy, every experience is full of emotion!